Poland warns migrants via SMS to ‘go back to Minsk,' not take pills 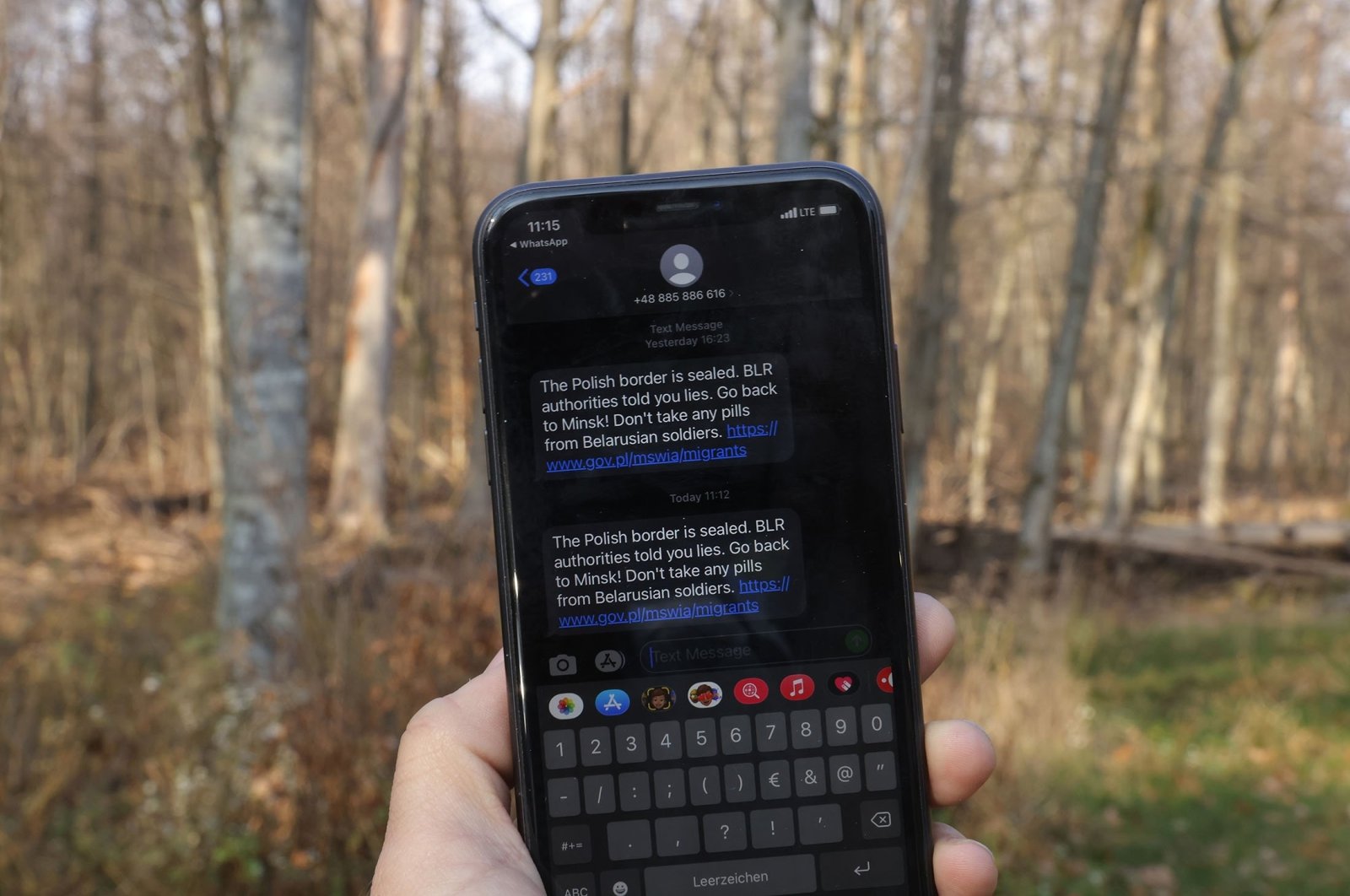 The photographer shows an alert on his smartphone sent by the Polish authorities meant for migrants seeking to enter Poland from Belarus near Hajnowka, Poland, Nov. 11, 2021. (Getty Images)
by DAILY SABAH WITH AGENCIES Nov 12, 2021 1:02 pm
RECOMMENDED

As thousands of migrants camped at the Polish-Belarus border in the hope of entering the European Union, SMS (short messaging service) messages warning them to "go back to Minsk" were allegedly automatically delivered to their phones.

Several witnesses and reporters have confirmed the reports of migrants at the border receiving the text messages.

“The Polish border is sealed. BLR authorities told you lies. Go back to Minsk!” the SMS reads.

The message also urged thousands of migrants not to take any "pills" from Belarusian soldiers as unverified reports from the ground suggested that border guards have given them medicines that contain methadone, which is used for chronic pain management.

Reportedly the pills have been given to people to help them "survive" the cold weather and give them strength to cross the dangerous path to the Polish side into Europe. Trapped between two borders, the migrants are enduring freezing weather in makeshift camps that have sprung up in forests on the Belarusian side near a crossing at the Polish town of Kuznica. It is feared that the situation might turn into a humanitarian crisis as access to the frontier is restricted and temperatures will go down.

The Belarusian state border authority said on Friday that a group of around 100 migrants was moving toward a makeshift camp at the border with Poland, Russia's RIA news agency reported.

European Union officials have accused Belarus President Alexander Lukashenko of using the migrants as pawns in a "hybrid attack” to retaliate against sanctions imposed on his authoritarian regime for a harsh internal crackdown on dissent. As the EU is contemplating further sanctions on Belarus, Lukashenko threatened to cut off the Russian Yamal-Europe pipeline that supplies natural gas to Europe via Belarus.

"I would recommend the Poles, Lithuanians and other brainless people to think before they talk,” he said.

The Kremlin on Friday clarified that Lukashenko had not consulted Moscow before raising the possibility of cutting the natural gas flows to Europe, and that Russia was a reliable exporter that fulfilled its obligations.

Speaking to reporters on a conference call, Kremlin spokesperson Dmitry Peskov said Lukashenko's threat was not coordinated with Moscow. Russia is a major exporter of natural gas to Europe via Belarus and the Kremlin made it clear it did not want to see any disruption in supplies.

"This is a statement by the president of Belarus," Peskov said, according to Reuters. "I want to remind you of President Putin's statement that Russia has always fulfilled its contract obligations... Belarus is our ally, but it is a sovereign state."

Peskov described Russia as a guarantor of Europe's energy security. "Russia's reliability as a supplier and partner for current and future contracts cannot be called into question," he said.

The United Nations Security Council discussed the crisis privately but took no action, though six of its Western members condemned the use "of human beings whose lives and well-being have been put in danger for political purposes by Belarus” and called on the international community "to hold Belarus accountable” and "to stop these inhumane actions.”

About 15,000 Polish troops have joined riot police and guards at the border. The Belarusian Defense Ministry accused Poland of an "unprecedented” military buildup, saying that migration control didn't warrant such a force. The Polish Defense Ministry said the migrants made several attempts to cross the border in recent weeks.

Near the village of Bialowieza, where a few hundred migrants threw debris across the razor-wire fence at Polish troops and then tried to destroy it, shots were fired in the air to deter them, the ministry said. Near the village of Szudzialowo, migrants hit a soldier in the chest with a tree branch, but he fired two warning shots in the air and was unhurt, the ministry said, adding that the attackers fled deeper into Belarus.

Since the start of the year, there have been 33,000 attempts to cross the border illegally, with 17,000 in October alone, the border guard service said. At least eight migrants have died, officials said, and conditions are getting worse with freezing night temperatures.

A video released by Russian state media Thursday showed hundreds of migrants pushing and scrambling to get the aid that was delivered to them, along with a woman being treated for what the report said was hypothermia.

Mulusew Mamo, a United Nations High Commissioner for Refugees representative in Belarus who visited the migrants, called the situation "catastrophic.”

"And in a day, it will be more catastrophic, I think," Mamo said, adding that aid is being distributed via the Red Cross and will continue for several days.

The crisis has been brewing since summer, as migrants try to cross from Belarus to Poland, Lithuania and Latvia. Many are headed to Germany, but Finland is also a destination.

Warsaw has taken a hard line, depicting migrants as dangerous criminals and changing its law to allow the arbitrary rejection of asylum applications, something condemned by the U.N. refugee agency. But Poland has largely received support on the border issue from Europe, facing only mild criticism for pushing the migrants back.

The problem "is not Poland," said German Foreign Minister Heiko Maas, as The Associated Press (AP) reported. "The problem is Lukashenko and Belarus and its regime, and so Poland has earned our European solidarity in this situation.”

But Jan Egeland, head of the Norwegian Refugee Council, said it was "shocking” to see Europe’s inability to properly handle such a relatively low number of migrants at the Poland-Belarus border.

"A few thousand people at Europe’s Polish border, many of whom have fled some of the worst crises in the world, is a drop in the ocean compared to the number of people displaced to countries that are much poorer elsewhere,” he said.

German Chancellor Angela Merkel spoke by phone with Russian President Vladimir Putin for the second time in as many days. The Kremlin said they discussed the Poland-Belarus border and the importance of a "quick settlement” along with international humanitarian norms. Merkel's office said she stressed the crisis was "brought about by the Belarus regime, which is using defenseless people in a hybrid attack against the European Union.”

Moscow and Minsk have close political and military ties, and Russia sent two nuclear-capable strategic bombers on a training mission over Belarus for a second straight day in a strong show of support. Lukashenko has emphasized the need to boost military cooperation in the face of what he has described as aggressive actions by NATO, including Poland.

The EU is looking at the role some airlines have played in carrying migrants and asylum-seekers to the bloc's doorstep, and there are reports that it is mulling sanctions against them. Russia’s national carrier Aeroflot strongly denied any involvement, saying it isn't conducting regular or charter flights to Iraq or Syria and that it didn’t have any between Istanbul and Minsk.

A Turkish official with direct knowledge of the issue said Turkish Airlines would halt selling tickets to Iraqi and Syrian nationals for flights to Minsk as part of measures being considered by Turkey to help resolve the crisis.

The official spoke on condition of anonymity, citing the sensitivity of the issue and because he was not authorized to announce company policy.

Iraq's Deputy Migration Minister Karim al-Nuri told the Russian state news agency Sputnik that his country would help its citizens who want to return from Belarus, working through its embassy in Russia because it doesn't have one in Belarus.