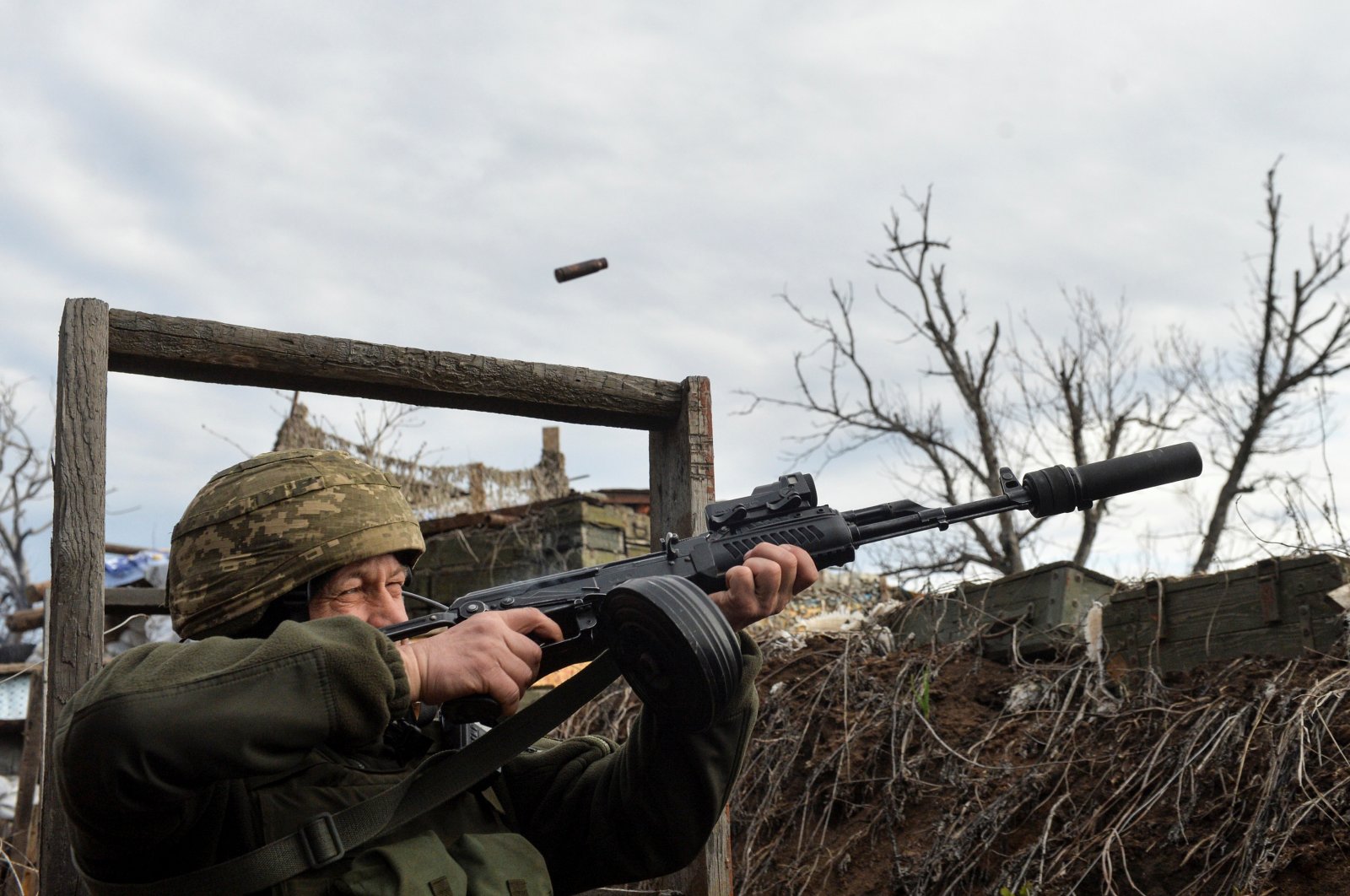 A service member of the Ukrainian armed forces fires in an attempt to shoot down an alleged unmanned aerial vehicle (UAV) at fighting positions on the line of separation from pro-Russian rebels near Donetsk, Ukraine, April 11, 2021. (Reuters Photo)
by REUTERS Apr 12, 2021 9:55 am
RECOMMENDED

Moscow had rebuffed attempts by Kyiv to start a dialogue over its troop build-up on Ukraine's border, the Ukrainian Foreign Ministry said Monday.

The ministry called on Russia "to withdraw troops from the border with Ukraine, to stop belligerent rhetoric and disinformation," according to a statement.

Ukrainian President Volodymyr Zelenskiy has not yet been able to speak to his Russian counterpart Vladimir Putin to discuss the escalating conflict in eastern Ukraine despite lodging a request to do so, Zelenskiy's spokesperson said.

Iuliia Mendel, Zelenskiy's spokesperson, told Reuters on Monday the Ukrainian leader had so far tried and failed to speak to Putin about the matter.

"The president's office, of course, made a request to speak with Vladimir Putin. We have not received an answer yet and we very much hope that this is not a refusal of dialogue," said Mendel.

Kremlin spokesperson Dmitry Peskov said he had not seen such a request for talks "in recent days" and was unaware one had been recently made. When asked if Putin had anything to say to Zelenskiy, Peskov said he hoped that what he called "political wisdom" would prevail in Kyiv when it came to de-escalating and avoiding a potential war.

Zelenskiy is due to head to Paris for talks on Russia's troop build-up and the escalating conflict in Donbass, she added.

Tension in the region is high and the United States has said that Russia is amassing its forces on Ukraine's eastern border at a level unseen since 2014 when it seized Ukraine's Crimean Peninsula and annexed it in violation of international law.

In recent weeks, fighting has intensified between Ukraine's army and pro-Russian separatists controlling two regions in the country's east, raising concerns of a major escalation in the long-running conflict.

Zelenskiy has spoken of the need for NATO to admit Ukraine, a step Russia, citing its own security concerns, opposes.

"On the one hand, you cannot panic, on the other hand, you need to understand that Russia has shown more than once that it can invade different countries," Mendel said.

Peskov insisted that Moscow is not involved in the conflict, adding, however, that Russia "will not remain indifferent" to the fate of Russian speakers who live in the conflict-torn region. "Russia is making every possible effort to help resolve this conflict. And we will continue to explain this tirelessly," Peskov said.

Putin on Friday accused Ukraine of "dangerous provocative actions" in the Donbass region. The Kremlin says Russia is free to move forces around its own territory as it sees fit for defensive purposes.

Since 2014, the conflict in Ukraine's east has claimed more than 13,000 lives and displaced many others, while negotiations for a lasting peace deal have stalled. Crimea is still recognized as part of Ukraine by the United Nations, and Kyiv vows to one day win it back.

President Recep Tayyip Erdoğan on Saturday urged the two countries to resolve tensions near through dialogue, adding that Turkey’s primary goal is to make the Black Sea region a basin of peace.