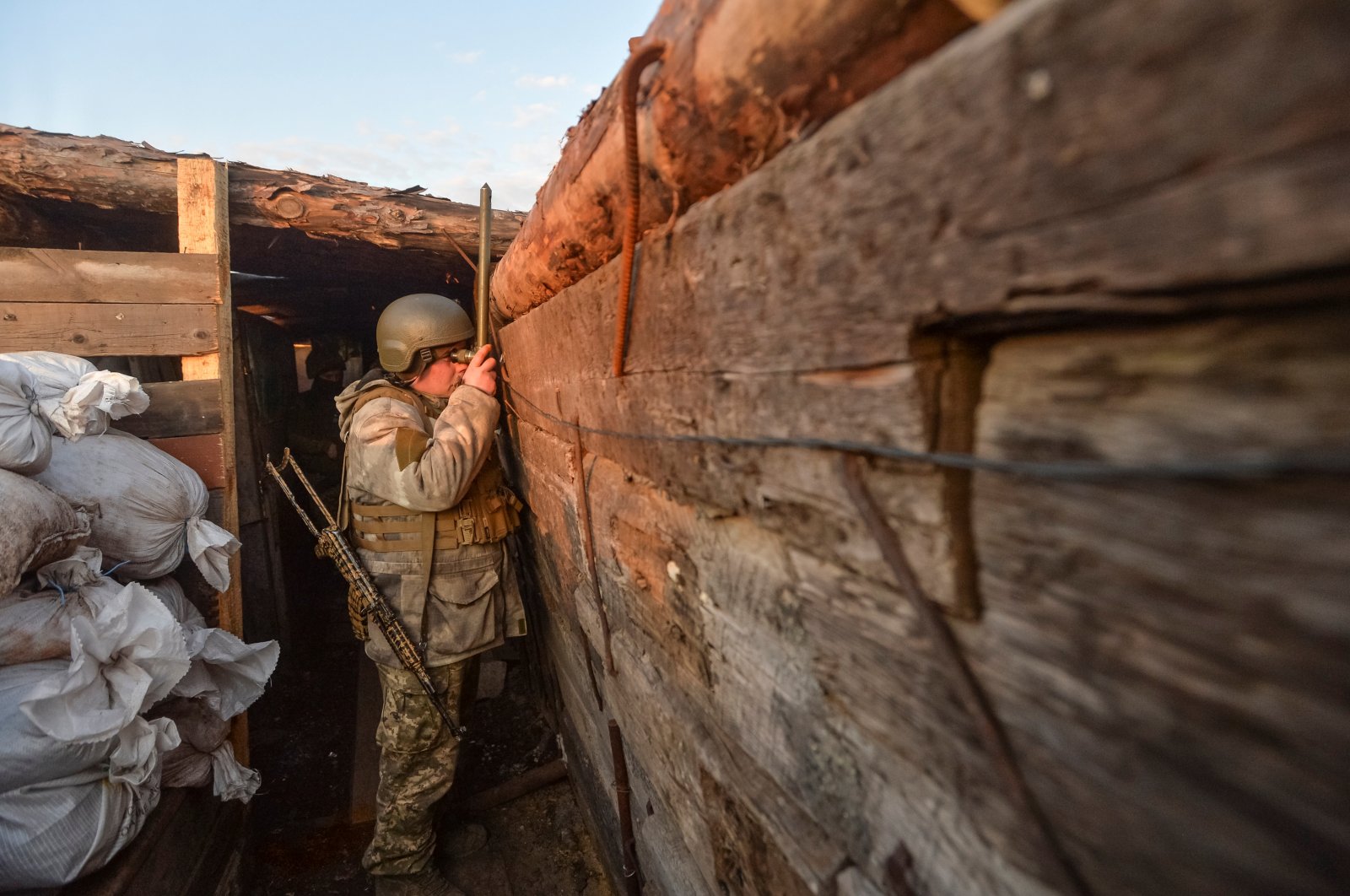 A service member of the Ukrainian armed forces is seen at fighting positions on the line of separation from pro-Russian rebels near Donetsk, Ukraine, April 10, 2021. (Reuters Photo)
by French Press Agency - AFP Apr 11, 2021 5:49 pm
RECOMMENDED

Tensions in Eastern Europe have been steadily rising recently, despite the Kremlin on Sunday declaring that it does not intend to start a war with Ukraine as the United States warned Russia of consequences if it continues to act aggressively.

In recent weeks fighting has intensified between Ukraine's army and pro-Russian separatists controlling two regions in the country's east, raising concerns of major escalation in the long-running conflict.

Peskov insisted that Moscow is not involved in the conflict, adding, however, that Russia "will not remain indifferent" to the fate of Russian speakers who live in the conflict-torn region. "Russia is making every possible effort to help resolve this conflict. And we will continue to explain this tirelessly," Peskov said.

Ukraine has accused Russia of amassing thousands of military personnel on its northern and eastern borders as well as on the annexed Crimean peninsula. The Kremlin has not denied the troop movements but insisted that Moscow does not intend to threaten anyone.

Meanwhile, U.S. Secretary of State Antony Blinken warned Sunday of "consequences" if Russia acts "aggressively" towards Ukraine. "I have to tell you I have real concerns about Russia's actions on the borders of Ukraine," Blinken told NBC's "Meet the Press."

"That's why we're in very close contact, in close coordination, with our allies and partners in Europe. All of us share that concern," Blinken said. "President Biden's been very clear about this. If Russia acts recklessly, or aggressively, there will be costs, there will be consequences."

The White House this week said the number of Russian troops at the border with Ukraine was now greater than at any time since 2014, when the conflict erupted after Russia's annexation of Crimea from Ukraine.

Biden, who previously oversaw Washington's policies on Ukraine, is viewed as a strong ally by Ukrainians and his top diplomat Blinken, in talks this week with his French and German counterparts, agreed on supporting Ukraine against "Russian provocations".

Fighting subsided in 2020 as a cease-fire agreement took hold last July, but clashes have picked up again since the start of the year, with each side blaming the other, and a diplomatic solution to settle the eastern regions' status has stayed out of reach.

On Thursday Ukraine's President Volodymyr Zelensky visited the eastern frontline, speaking with soldiers in the trenches. According to the president, 26 Ukrainian soldiers have been killed since January, compared to 50 in all of 2020.

Since 2014, the conflict in Ukraine's east has claimed more than 13,000 lives and displaced many others, while negotiations for a lasting peace deal have stalled.

Crimea is still recognized as part of Ukraine by the United Nations, and Kiev vows to one day win it back.