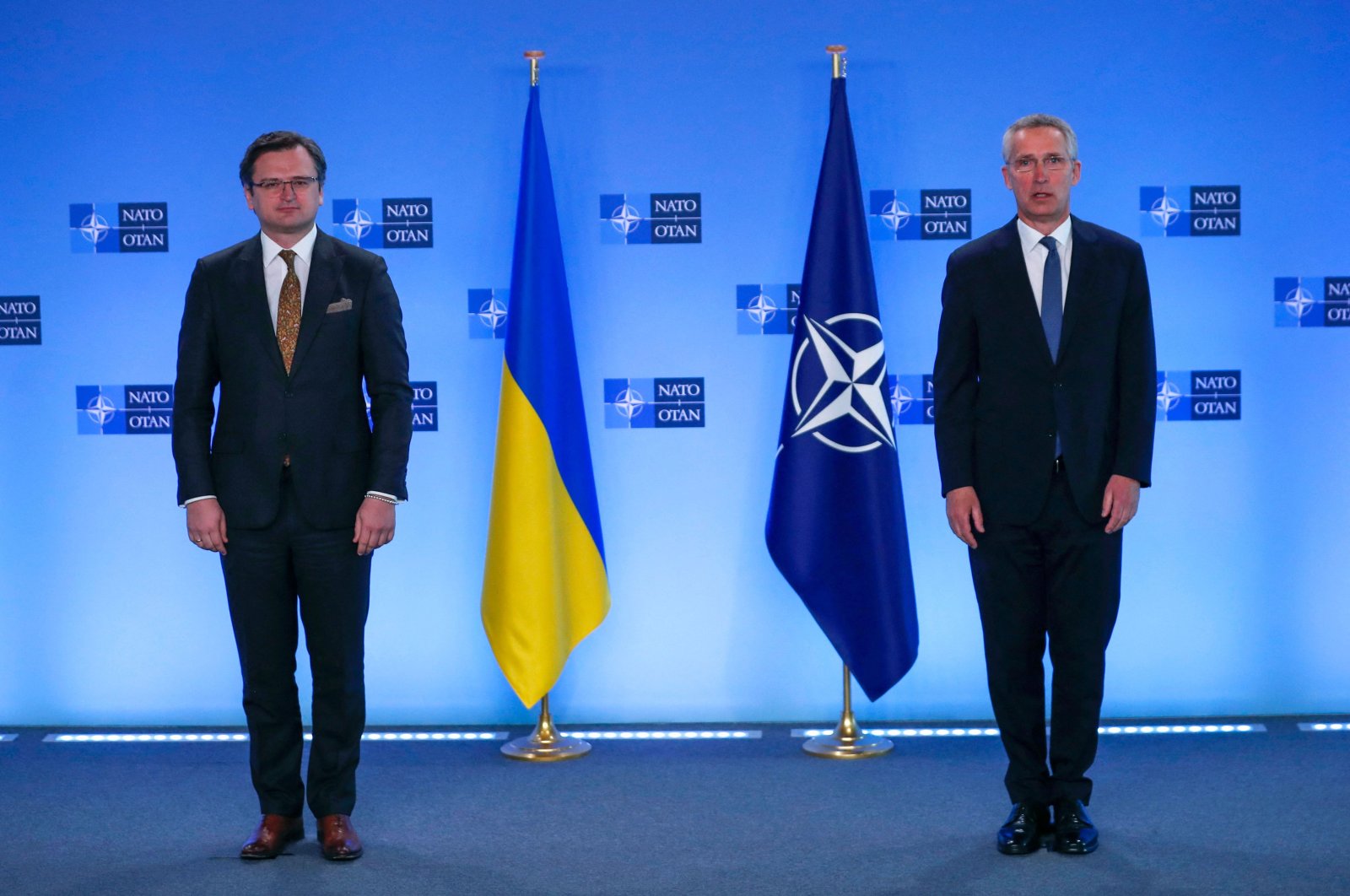 NATO Secretary-General Jens Stoltenberg called on Moscow Tuesday to withdraw its forces from Ukraine, and expressed the alliance's "unwavering” support for Russia’s neighbor.

In a news conference with Ukrainian Foreign Minister Dmytro Kuleba, Stoltenberg said that "NATO stands with Ukraine,” and added that the Russian movements were "unjustified, unexplained and deeply concerning.”

The comments come amid a surge of cease-fire violations in eastern Ukraine, where Russia-backed separatists and Ukrainian forces have been locked in a conflict since Moscow’s 2014 annexation of Ukraine’s Crimean Peninsula. Stoltenberg called it the biggest military buildup since then.

"Russia has moved thousands of combat troops to Ukraine’s borders, the largest massing of Russian troops since the illegal annexation of Crimea in 2014. Over the last days, several Ukrainian soldiers have been killed in eastern Ukraine,” Stoltenberg said. "Russia must end this military build-up in and around Ukraine, stop its provocations and deescalate immediately," he added.

NATO and the West must act quickly to prevent an escalation of violence between Ukraine and Russia, Kuleba said, adding that further sanctions against Moscow could help.

"At the operational level, we need measures which will deter Russia and which will contain its aggressive intentions. This could be... a new round of sanctions which would raise the price of Russian aggression," Kuleba told a news conference, according to Reuters. "This could be direct support aimed at strengthening Ukraine's defence capabilities. Because we do know that Russia spares no effort to prevent third countries from cooperating with Ukraine in the defense sector. Russia is working hard to undermine our defense capabilities."

Kuleba sounded defiant toward Moscow and said Ukraine and its Western partners were better prepared than seven years ago.

"Should Moscow take any reckless move or start a new spiral of violence, it will be costly in all senses,” Kuleba said, while Stoltenberg emphasized that the Western alliance, and not Moscow, would decide whether Ukraine joins in the future.

"It is for the 30 NATO allies to decide when Ukraine is ready for membership. No one else has any right to try to meddle or to interfere in that process," Stoltenberg said. "Russia is now trying to reestablish some kind of sphere of influence where they try to decide what neighbors can do," he added.

"The secretary expressed concern about Russia’s deliberate actions to escalate tensions with Ukraine, including through its aggressive rhetoric and disinformation, increasing ceasefire violations, and movement of troops in occupied Crimea and near Ukraine’s borders," the State Department said in a statement.

Meanwhile, Moscow on Tuesday accused the United States and other NATO countries of turning Ukraine into a "powder keg."

"The United States and other NATO countries are deliberately turning Ukraine into a powder keg," Deputy Foreign Minister Sergei Ryabkov was quoted as saying by Russian news agencies, adding that countries were increasing their arms supplies to Ukraine. He warned that "if there is any aggravation, we of course will do everything to ensure our security and the safety of our citizens, wherever they are."

"But Kiev and its allies in the West will be entirely responsible for the consequences of a hypothetical exacerbation," Ryabkov added.

Commenting on the joint statement of the G-7 countries and the EU High Representative, Ryabkov noted that "there is nothing new and nothing adding constructiveness to the general situation in principle and could not be." Ryabkov asserted that "the G-7 continues to degrade" and its role in international affairs is declining.

Moscow also warned the United States to keep its warships away from the Russian-occupied Crimean peninsula, calling their deployment in the Black Sea a provocation.

Russia annexed Crimea from Ukraine in 2014 and two U.S. warships are due to arrive in the Black Sea this week amid an escalation in fighting in eastern Ukraine where government forces have battled Russian-backed troops in a conflict Kyiv says has killed 14,000 people. The deployment comes as the West sounds the alarm over what it says is a big and unexplained build-up of Russian forces close to Ukraine's eastern border and in Crimea. Russia has said it moves its forces around as it sees fit, including for defensive purposes.

Ryabkov was cited by Russian news agencies on Tuesday as warning U.S. warships in the Black Sea to keep their distance, saying the risk of unspecified incidents was very high.

"There is absolutely nothing for American ships to be doing near our shores, this is purely a provocative action. Provocative in the direct sense of the word: they are testing our strength, playing on our nerves. They will not succeed," Ryabkov was cited as saying. "We warn the United States that it will be better for them to stay far away from Crimea and our Black Sea coast. It will be for their own good."

The Pentagon has declined to discuss the ships' deployment, saying only that the U.S. military routinely sends vessels to the region. Russia's Black Sea Fleet is based in Crimea, and it has powerful missile and radar facilities on the peninsula.