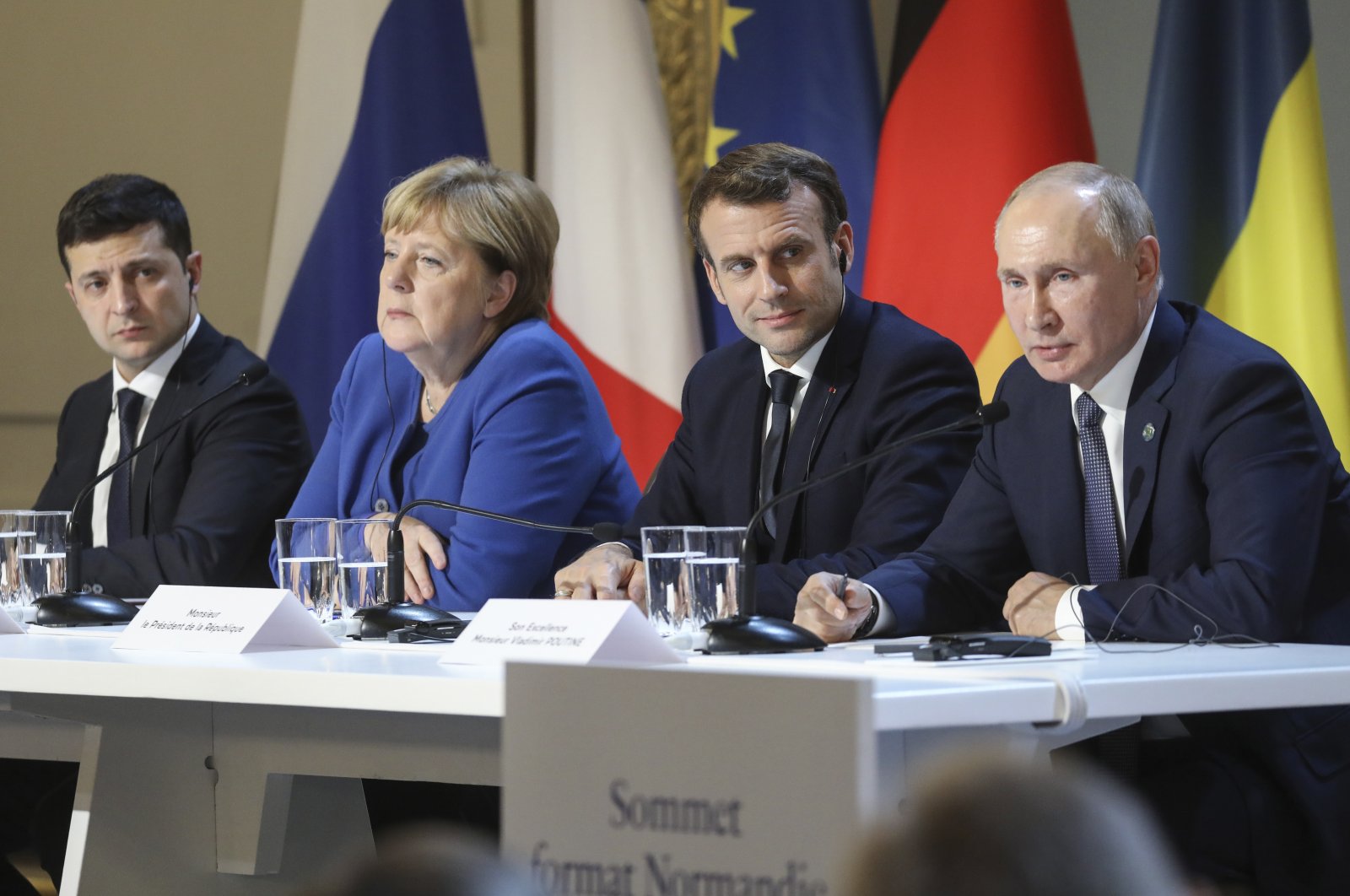 French President Emmanuel Macron and German Chancellor Angela Merkel met Friday with Ukrainian President Volodymyr Zelenskiy in a bid to show their support for Kyiv amid Russian military movements near Ukraine's border that the Western world sees as an escalation of already tense relations between the two neighbors.

A massive buildup of Russian troops along the border with Ukraine has sparked new tension in eastern Ukraine, where government forces have been battling pro-Russian separatists since 2014.

Zelenskiy and his wife, Olena, were greeted by Macron and his wife, Brigitte, before lunch at the Elysee presidential palace. The two heads of state later met with Merkel by videoconference.

Merkel's office said the three discussed "the security situation along the Ukrainian-Russian border, as well as in eastern Ukraine. They shared their concerns about the buildup of Russian troops on the border with Ukraine ... They demanded the withdrawal of these troop reinforcements so as to achieve a de-escalation of the situation.”

Macron and Merkel underlined their support for the sovereignty and territorial integrity of Ukraine, according to French and German officials.

"We’re hoping that the visit of President Zelenskiy will enable giving a new momentum” to negotiations with both Russia and Ukraine and ultimately to a political solution to the conflict, a French official at the French presidency said, speaking on condition of anonymity after the meeting.

"We seek to understand positions and tensions and see how we can figure out the narrow paths between the (different) views,” the official said, as quoted by The Associated Press (AP).

"Ukraine's sovereignty is under threat," Macron's office had said Thursday, adding: "All our work is aimed at avoiding an escalation and defusing tensions."

France and Germany, which helped broker a peace deal that was signed in February 2015 in the Belarusian capital of Minsk, are working on preparing for more talks involving the leaders of Ukraine and Russia.

Their last meeting, which took place in Paris in December 2019, helped ease tensions but failed to make any progress on a political resolution that would end the conflict in eastern Ukraine. Zelenskiy called on France and Germany for action.

"They always support our integrity, our sovereignty ... But I said very directly and very honestly that we need now to move very quickly,” the Ukrainian leader said during a news conference. "I think it’s not only our problem, that it’s about the safety of Europe,” Zelenskiy said.

Zelenskiy commented on a potential meeting between U.S. President Joe Biden and Russia's Vladimir Putin. "When there is a dialogue, the canons are silent,” Zelenskiy said and added, "I think it could help in resolving some issues ... When such important countries don’t talk, others suffer.”

"(Russia is) openly threatening Ukraine with war and the destruction of Ukrainian statehood," Foreign Minister Dmytro Kuleba told a press conference with counterparts from the fellow former Soviet countries of Estonia, Latvia and Lithuania. "The red line of Ukraine is the state border. If Russia crosses the red line, then it will have to suffer," he warned.

"Europe’s security is depending on Ukraine's security,” he said, adding his country is seeking support from the European Union and the NATO alliance. "I would very much like Europe to have a 100% understanding of how they assess Ukraine. If they see Ukraine in the European Union, they need to say it openly."

Asked how long it takes to return Russian-annexed areas, he said: "People who do not live in Ukraine sometimes say that everything is clear with Donbass, it will return, and Crimea will never be returned. Other people, even in Ukraine, say that we will see the return of Donbass, and Crimea, perhaps, only after the president in Russia changes."

"I live in a different paradigm. For me, Crimea and Donbass did not go anywhere, and these are our territories," he added. "There are people in Crimea who once shouted that Russia would come and they would be a "pearl by the sea." But nothing happened. It has become worse, there is no tourism, no enterprises, no work, high prices, no water. Therefore, I believe that there is no future for them without Ukraine."

Zelenskiy said Thursday after chairing a meeting of Ukraine's security council that the discussions in Paris are important for preparing the so-called "Normandy format” talks involving the leaders of Ukraine, Russia, France and Germany. Their last meeting in Paris in December 2019 helped ease tensions but failed to make any progress on a political settlement.

"Our goal... is to de-escalate tensions,” a French official at the French presidency, speaking on condition of anonymity ahead of the talks, said. "All the work we’re doing is in support of Ukraine's sovereignty,” the official said.

The Kremlin on Friday called on Macron and Merkel to encourage Ukraine to observe cease-fire agreements in its conflict with pro-Russian separatists.

The German and French leaders should communicate to the Ukrainian leadership the "need to decisively stop any provocative actions on the contact line and emphasize the need for an unconditional observance of the ceasefire regime," Kremlin spokesman Dmitry Peskov told reporters.

In recent weeks Moscow has amassed tens of thousands of troops along Ukraine's northern and eastern borders, as well as on the Crimean peninsula, which Moscow annexed in 2014. Russia's Defense Ministry says the troops are merely responding to "threatening" actions by the NATO alliance and participating in military drills. Ukraine, where a pro-Kremlin president was ousted in a popular uprising in 2014, has made clear its ambition to join NATO.

Thursday's visit to Kyiv by senior diplomats from the Baltic states is the latest show of support from European countries and the United States, which has warned of "consequences" if Russia acts "aggressively" toward Ukraine.

On Wednesday, U.S. President Joe Biden and Merkel called on Russia to reduce its border deployment. Biden had a day earlier proposed a summit with Putin – an offer that Russia is still considering. Some observers have cast the escalation as an attempt by both Moscow and Kyiv to test Biden to see how far he is willing to go to defend Washington's ally and confront Russia. Biden raised hackles in Russia last month by agreeing with a description of Putin as a "killer."

His administration on Thursday rolled out a sweeping set of sanctions on Russia over its election interference, hacking campaigns and other malign activity. Acting in partnership with the European Union, the United Kingdom, Canada and Australia, the U.S. sanctioned Russian people and entities that have supported Russia’s claimed annexation of the Crimean Peninsula, which is not recognized by the international community.

Russian companies that helped build a bridge linking Crimea to Russia and Russian officials serving in leadership positions in Crimea were sanctioned jointly by the U.S. and its allies, according to AP.

The Russian Defense Ministry said on Friday a MiG-31 fighter jet had escorted an RC-135 U.S. strategic reconnaissance aircraft over the Pacific Ocean along the coast of Kamchatka, Tass news agency reported.

The ministry said the U.S. aircraft had not violated Russia's borders. The ministry said that after the "fighter jet deployed the foreign military aircraft it safely returned to the airfield." It also emphasized that the flight of the MiG-31 was carried out in strict accordance with international rules, and the border was not violated.

The Russian troop buildup comes amid an uptick in fighting since the start of the year in eastern Ukraine over which Moscow and Kyiv have traded blame. At least 28 Ukrainian soldiers have been killed in the breakaway regions of Donetsk and Lugansk since the beginning of January, compared to 50 in all of 2020.

The separatists have said that more than 20 of their fighters have been killed already in 2021. Moscow accuses Kyiv of planning an offensive against the separatists and warned that it could intervene in the event of an attack on their strongholds, where many residents have been issued Russian passports.

The latest fighting has shattered a cease-fire brokered last July that had brought relative calm to the region after years of clashes that have claimed some 14,000 lives.