Russia vows to decisively act if US takes 'unfriendly steps' 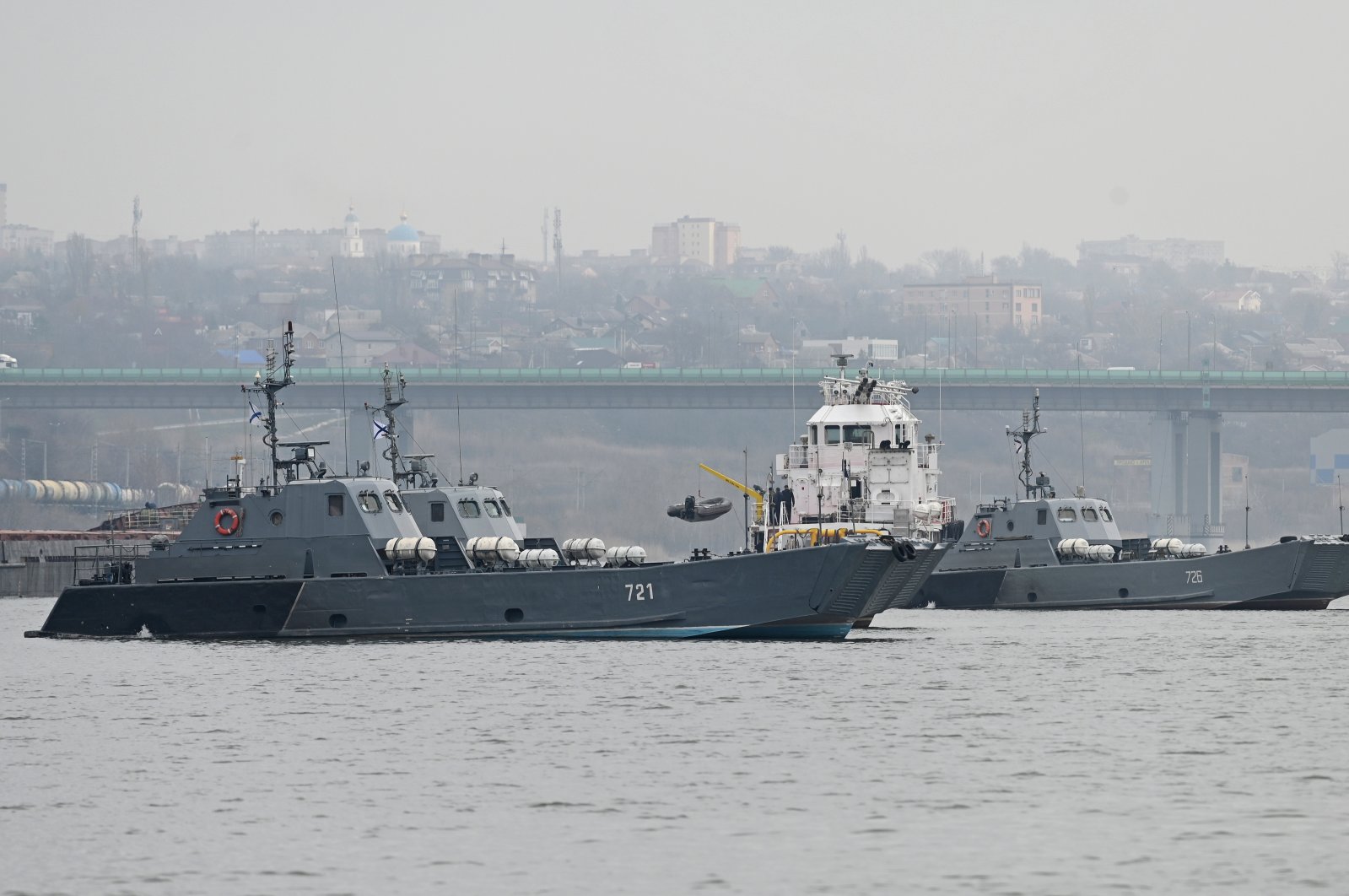 Landing crafts of the Russian Navy's Caspian Flotilla are pictured on the Don River during the inter-fleet move from the Caspian Sea to the Black Sea, on the outskirts of Rostov-on-Don, Russia, April 12, 2021. (Reuters Photo)
by Daily Sabah with AFP Apr 14, 2021 12:11 pm
RECOMMENDED

Russia will act decisively if the United States undertakes any new "unfriendly steps" such as imposing sanctions, the Kremlin told Washington Wednesday, a day after leaders of the two countries spoke on the phone, according to the RIA news agency.

The U.S. leader confirmed his intention to build stable relations with Russia and offered to hold a personal meeting in a third country in the coming months. The Kremlin said Wednesday it will consider Biden's proposal to hold a summit with Putin, the invitation that was being hailed in Moscow as a sign that Washington had blinked first in the showdown with Russia over Ukraine. With indications that work was already underway for a potential meeting in Finland, Russian officials were crowing that Moscow was finally being treated with the respect it deserves.

"It was a very important step forward ... news on a global scale," said Konstantin Kosachev, the chairperson of the foreign affairs committee of the Russian Parliament's upper house, Agence France-Presse (AFP) reported.

Putin's spokesperson, Dmitry Peskov, told reporters that it is "early to talk about this meeting in terms of specifics."

"This is a new proposal and it will be studied. There will be an analysis," Peskov said. “Probably, you yourself can conclude that the conversation was quite long in time,” he added.

Putin and his American counterpart also discussed issues such as strategic security and arms control, the situation in Afghanistan and global climate change. According to RIA, the parties also discussed the situation in Donbass. Putin outlined approaches to a political settlement of the conflict based on the Minsk Protocol that was signed on Sept. 15. The presidents agreed to instruct the relevant departments to address the problems raised during the conversation.

Meanwhile, Germany accused Russia Wednesday of seeking provocation with its troop buildup along the border with Ukraine.

"My impression is that the Russian side is trying everything to provoke a reaction," German Defense Minister Annegret Kramp-Karrenbauer told ARD public television. "Together with Ukraine, we won't be drawn into this game," she added.

The growing Russian presence at the Ukrainian border has caused concern in the West in recent days, with the U.S. saying that troop levels are at their highest since 2014 when the war first broke out with Moscow-backed separatists. Moscow has said it sent troops to its western borders for combat drills because of "threats" from the trans-Atlantic alliance NATO. However, Kramp-Karrenbauer voiced doubt about Moscow's claim.

"If it is a maneuver like the Russian side says, there are international procedures through which one can create transparency and trust," she said, adding that Germany was monitoring developments very closely. Ukraine has so far reacted in a "sober" manner, said the minister, stressing that NATO stands by Kyiv's side.

"We are committed to Ukraine. That is very clear," she said, adding it is also clear that Moscow "is just waiting for a move, so to speak, from NATO, to have a pretext to continue its actions."

Russia started military drills Wednesday, according to the information support department of the Black Sea Fleet, a Russian military unit in occupied Crimea.

The frigate Admiral Makarov, small missile ships Grayvoron and Vyshny Volochek, missile hovercraft Samum, minesweeper Ivan Golubets, as well as large landing ships will take part in artillery firing at surface and air targets. The crews have already conducted training to overcome a conventional minefield. The military exercise will also involve aircraft and helicopters of the naval aviation and air defense of the fleet.

Earlier, Turkish diplomatic sources said Washington had notified Ankara about the passage of two U.S. warships, namely the Roosevelt and Donald Cook, through the Bosporus to the Black Sea, where they would be stationed from April 14 to April 15 and from May 4 to May 5, respectively.

According to Pentagon spokesperson John Kirby, the operations of U.S. warships in the Black Sea are routine, and the U.S. is coordinating these actions with Turkish authorities in line with the Montreux Convention. The 1936 Montreux accord gives Turkey control over the Bosporus and Dardanelles. It also limits access to naval warships to the Black Sea and governs foreign cargo ships.