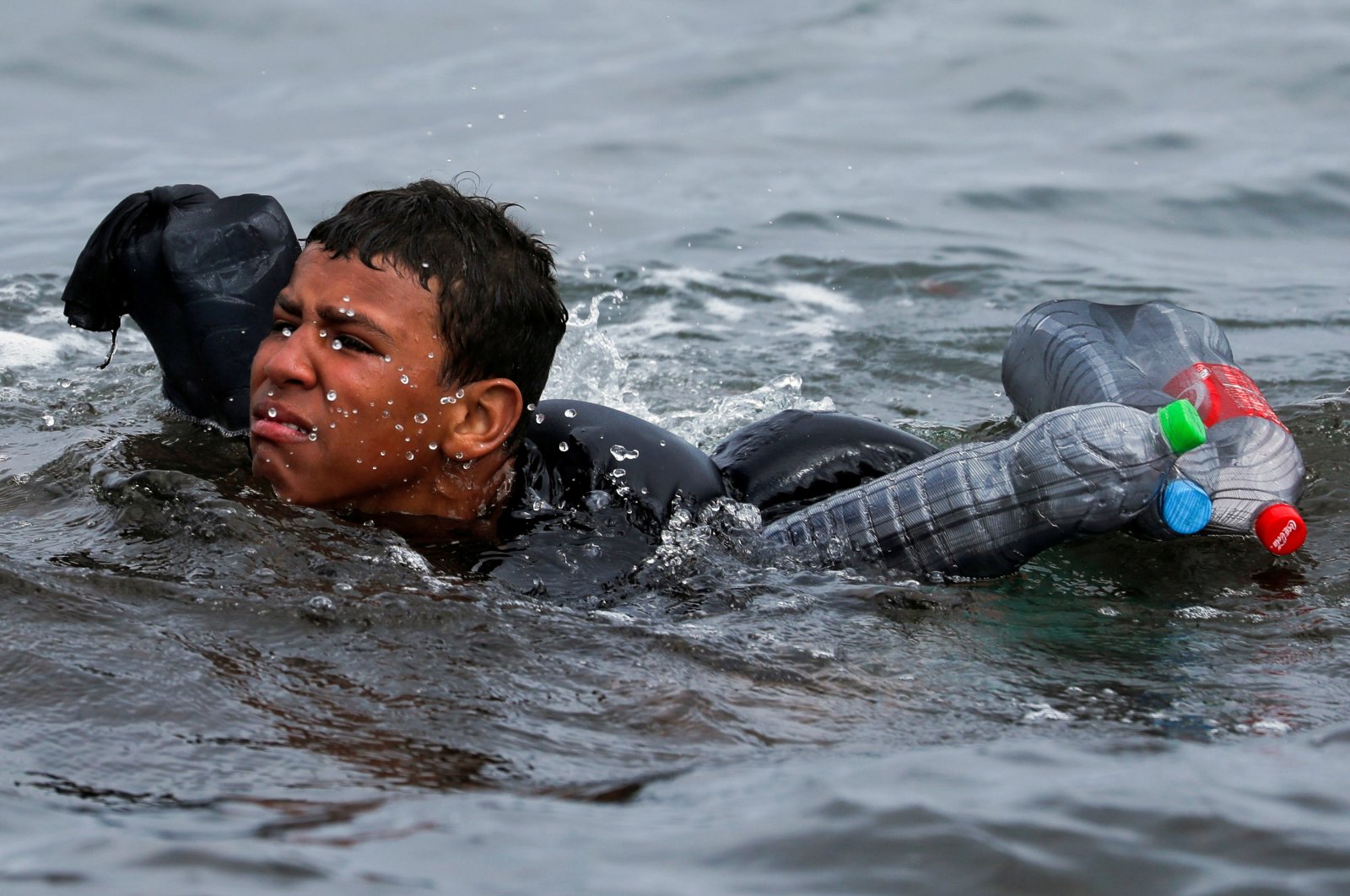 A Moroccan boy swims using bottles as a float, near the fence between the Spanish-Moroccan border, after thousands of migrants swam across the border, in Ceuta, Spain, May 19, 2021. (Reuters Photo)
by French Press Agency - AFP May 29, 2021 5:36 pm
RECOMMENDED

Morocco's use of young people to violate Spain's borders early last week was condemned by Spanish Defense Minister Margarita Robles, who called the action against its enclave Ceuta "unacceptable" on Saturday, further adding to the war of words between the two countries after Robles earlier accused Rabat of "aggression" and "blackmail."

"One thing is clear: when minors are used as an instrument to breach Spain's territorial borders, this is unacceptable," she told RTVE public television at a ceremony to mark armed forces day.

Spain and Morocco have been locked in a diplomatic spat over Western Sahara, which set off a chain of events that last week saw up to 10,000 mainly young people cross into the Spanish North African enclave of Ceuta as Moroccan guards looked the other way.

The arrivals overwhelmed the tiny enclave and although most have been sent back, there are still more than 800 mostly Moroccan minors in Ceuta, where the authorities are working around the clock to track down their parents.

The incident has sparked a war of words between Madrid and Rabat, with Robles last week accusing Morocco of "aggression" and "blackmail".

"It's unacceptable from any point of view, whether you're talking international law or humanitarian law," she said on Saturday.

"No country acting in a spirit of good neighborliness could use minors in that way."

Spain, she said, had always been "one of Morocco's main supporters, but we demand respect from Morocco ... because that is key to coexistence."

Madrid said 1,500 of the arrivals were minors while Amnesty International gave a figure of 2,000. Ceuta has accused Rabat of using "manipulative tricks" to encourage youngsters to cross to put pressure on Spain over Western Sahara.

The influx was made possible because Moroccan border forces deliberately looked the other way in what was widely understood as a punitive gesture after Spain offered hospital treatment to the leader of Western Sahara's independence movement.

Spain's two tiny enclaves of Ceuta and Melilla have Europe's only land border with Africa, making them a magnet for migrants desperate to escape grinding poverty and hunger.

The huge influx of people had triggered fears of an upsurge in COVID-19 infection, but by Friday, that number stood at just 39 imported cases, health ministry figures showed.