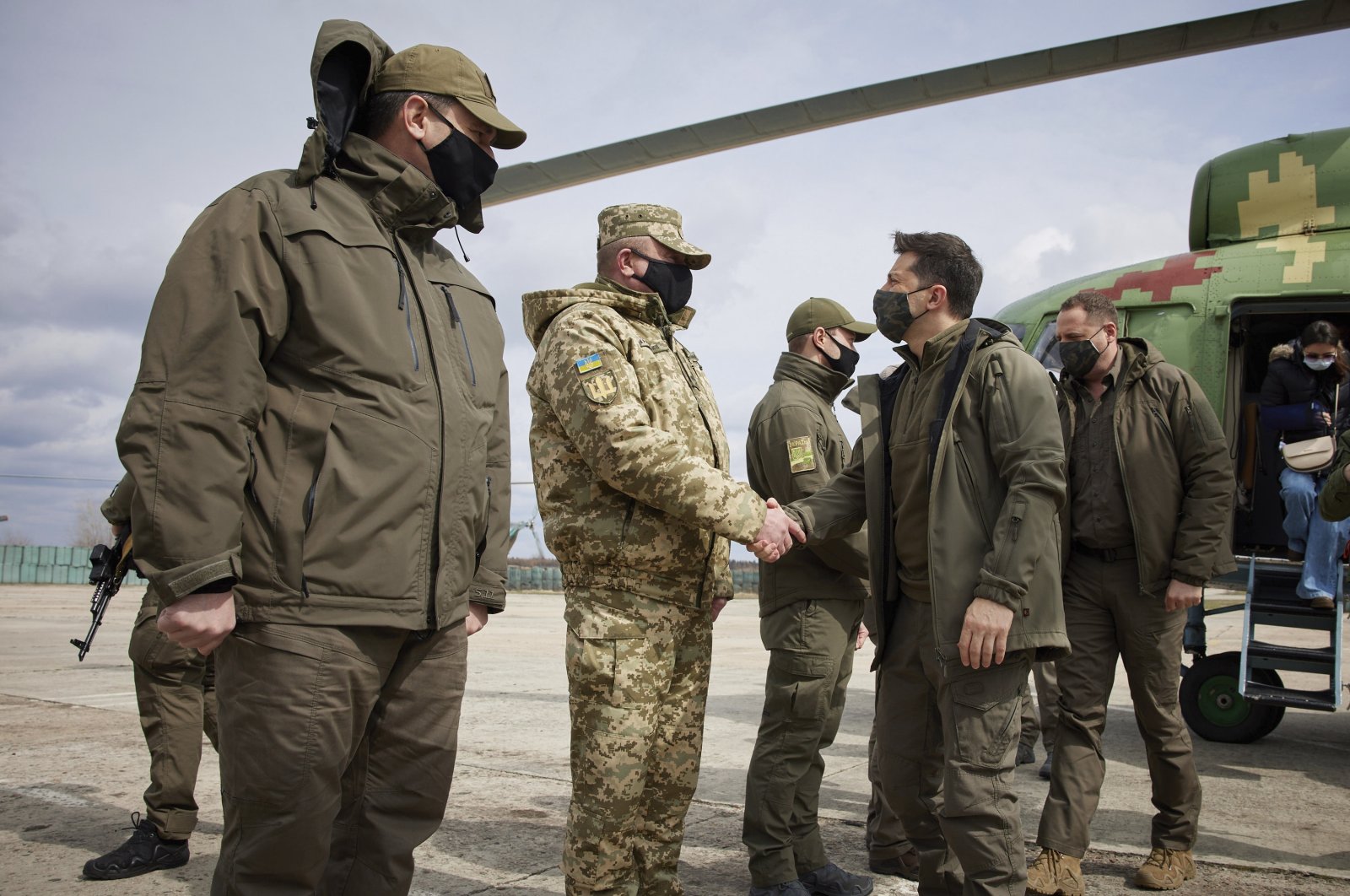 Ukraine's President Volodymyr Zelenskiy visited the embattled area where pro-Russian separatists have been fighting for years with Ukrainian soldiers, as fears of an escalating conflict in the eastern part of the country grew amid recent reports alleging that Moscow is moving troops to the border it shares with its neighbor.

Ukraine’s president on Thursday visited the area of conflict in his country's east amid an escalation of tensions that have raised fears of a resumption of large-scale hostilities.

The conflict with Russia-backed separatists in eastern Ukraine erupted shortly after Moscow’s 2014 annexation of Ukraine’s Crimea peninsula. More than 14,000 people have died in the fighting. Officials in Ukraine and the West have raised concerns about increasingly frequent cease-fire violations in the country's industrial heartland, known as Donbas.

They also expressed worries about Russian troops' buildup along the border with Ukraine. "I want to be with our soldiers in the tough times in Donbas,” Zelenskiy tweeted as he headed to the conflict area Thursday.

He said that a 23-year-old Ukrainian soldier was killed in the area on Wednesday night.

"Thank you for keeping people calm and defending our land,” Zelenskiy told troops during the trip. "You are a true example of heroism and dedication. We remember every warrior who died defending our state.”

Zelenskiy has accused Russia of flexing its military muscles and held a series of calls with Western leaders to rally support for Ukraine amid the tensions.

Russia has rejected the claims, arguing that it can deploy its troops wherever it deems necessary on its territory and emphasizing that they don't threaten anyone. It has accused Ukrainian authorities of trying to stoke up tensions in the east for domestic policy purposes.

In Thursday's call with German Chancellor Angela Merkel, Russian President Vladimir Putin "drew attention to the provocative actions of Kyiv, which has deliberately sought to exacerbate tensions along the line of control,” the Kremlin said in its readout of the call.

Merkel’s office said she discussed the increased Russian military presence in the area near eastern Ukraine with Putin, and "called for the removal of these troop reinforcements in order to achieve a de-escalation of the situation.”

Speaking at a panel discussion with political experts in Moscow, Dmitry Kozak, a Putin aide who serves as Russia's top negotiator with Kyiv, warned Ukraine against using military force to retake control of the eastern regions, where many residents have received Russian citizenship.

"The start of hostilities will the beginning of an end for Ukraine,” Kozak said. "It would mean shooting itself not just in the foot, but in the head.”

Asked if Russia could intervene militarily, Kozak responded that "it will depend on the scale of the fire.”

"If they try to do it like in Srebrenica, as our president said, we will likely have to come to their defense,” he said in a reference to the July 1995 massacre of civilians in Srebrenica by Bosnian Serb forces during the Bosnian war.

Ukraine and many Western nations have accused Russia of sending troops and weapons to eastern Ukraine to support the rebels - accusations the Kremlin has denied.