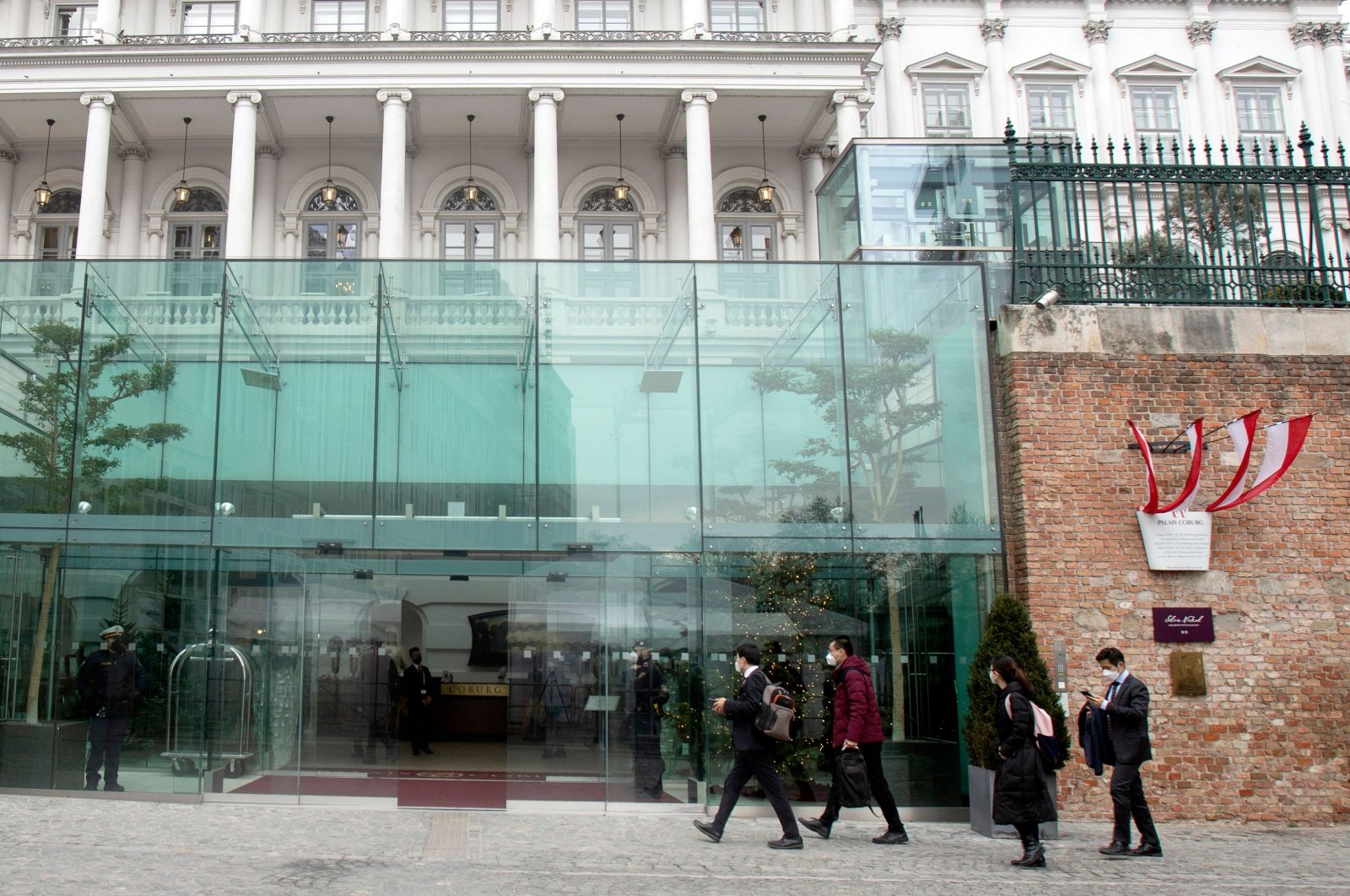 People walk outside The Hotel Palais Coburg, where talks are planned to resume on reviving the 2015 Iran nuclear deal – the Joint Comprehensive Plan of Action (JCPOA) – in Vienna on Dec. 27, 2021. (AFP Photo)
by ASSOCIATED PRESS Dec 27, 2021 2:18 pm
RECOMMENDED

Iran insisted on Monday that the United States and its allies promise to allow Tehran to export its crude as negotiations on restoring the tattered nuclear deal were to resume in Vienna.

The remarks by Iranian Foreign Minister Hossein Amir-Abdollahian signal that Iran is pressing its position ahead of the negotiations over reviving the landmark 2015 nuclear deal. The talks have struggled to make headway and were adjourned earlier this month after a round marked by tensions over new demands from Tehran.

Speaking to reporters in Tehran, Amir-Abdollahian said Iran wants the upcoming round of talks to focus on its sanctions-hit oil industry. The aim is to get to the "point where Iranian oil is being sold easily and without any barriers and its money arrives in Iran’s bank accounts,” he said.

Tehran's landmark accord with world powers granted the nation sanctions relief in exchange for curbs on its nuclear program. But in 2018, then-President Donald Trump withdrew America from the deal and imposed sweeping sanctions on Iran, including against its oil sector – the lifeline of its economy. Iran's crude exports plummeted and international oil companies scrapped deals with Tehran, weakening its economy.

As the parties to the atomic deal prepared to convene, Amir-Abdollahian said Iran wanted to "be able to enjoy full economic concessions under the nuclear deal.”

"Guarantee and verification (of the removal of sanctions) are among topics that we have focused on,” he said.

The new, conservative administration of Iranian President Ebrahim Raisi has repeatedly demanded the removal of all economic sanctions before Iran reins in its nuclear advances.

Separately on Monday, Iranian Foreign Ministry spokesperson Saeed Khatibzadeh said it would be "intolerable” for the West to demand anything from Tehran beyond compliance with the original deal.

Iran has steadily abandoned all of the accord's limits since the American withdrawal and is now enriching uranium to 60% purity – a short, technical step from weapons-grade levels. It spins ever-more advanced centrifuges also barred by the deal.

Iran insists that its nuclear program is peaceful. But the country’s significant nuclear steps have alarmed regional rivals and world powers. Diplomats have warned that time is running out to restore the deal as Iran maintains a hard line in putting the onus on the U.S. to lift sanctions.

The talks involve all the parties to the original nuclear deal – Iran, Britain, France, Germany, Russia and China. Iran refuses to talk directly to the American envoy, who is engaging through the other signatories.