Palestinian hatred central to Israeli coalition that could oust Netanyahu 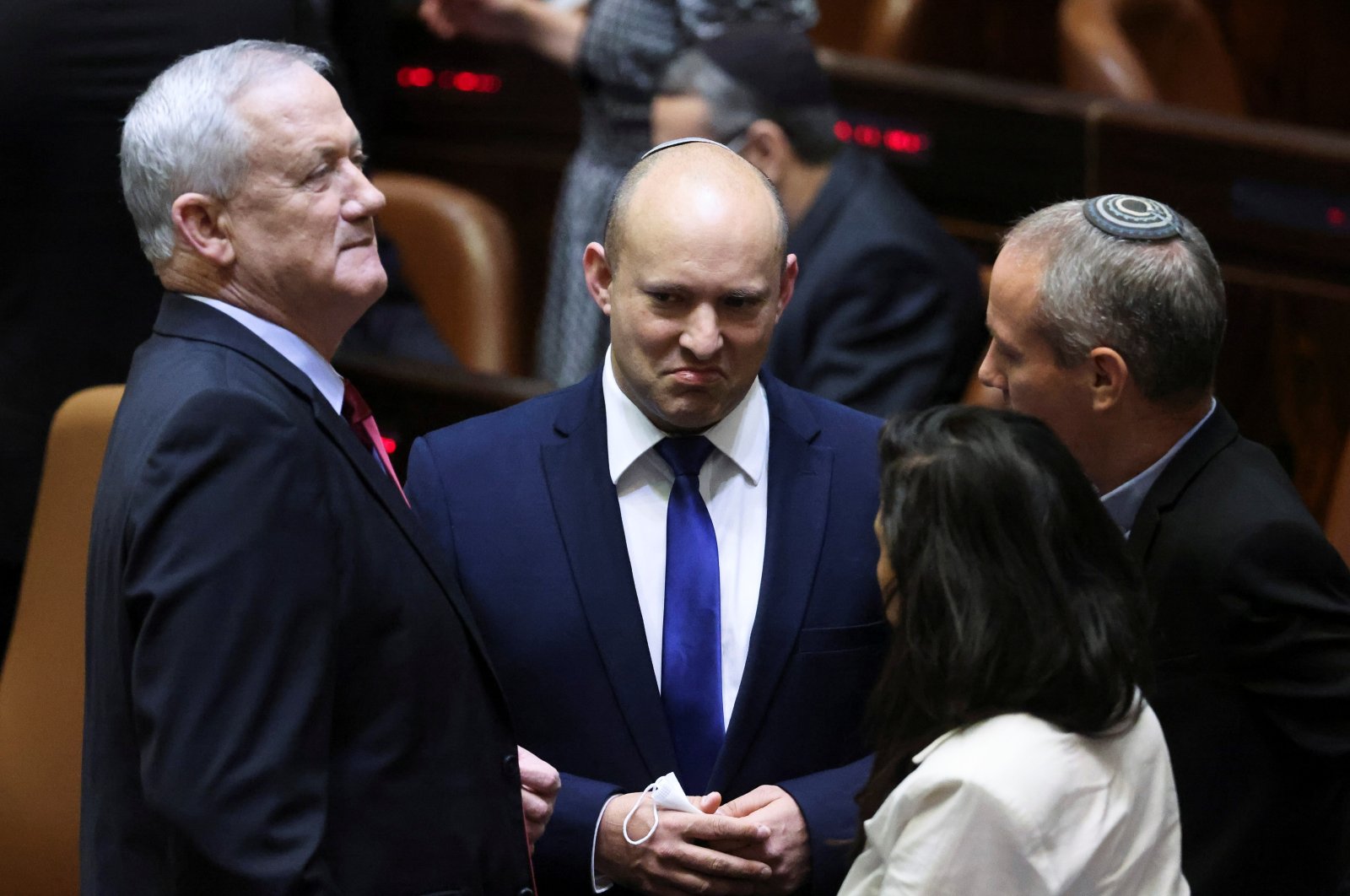 The whole world is watching as a coalition that threatens to remove Netanyahu from his post takes shape in Israel. Palestinians, however, watch the events unfold in the Knesset with indifference, knowing nothing will change for them as the characters change but the sentiment remains the same. Calls for their displacement and murder come as no shock, they say it all coming over the course of the current leader's 12-year rule

As Israeli politicians battled to unseat long-term Prime Minister Benjamin Netanyahu, Palestinians in the occupied territories watched the struggle as another tragicomedy. For them, nothing will change given that opposition leaders hold the same anti-Palestinian stance as the current head.

The clock was ticking as former TV presenter Yair Lapid together with right-wing religious-nationalist Naftali Bennett tried to form an alternative governing alliance Wednesday to bring down the right-wing leader known as Bibi.

Bibi, who has ruled Israel for the past 12 years as the head of the country, managed to stay in the office after numerous elections – each ending in deadlock. His struggle to remain in power was marred by a corruption trial that lasted for more than two years with the prime minister facing corruption charges in bribery cases. The fourth inconclusive election in two years was no different, resulting in a political deadlock and Netanyahu remaining in his post with instructions from Israeli President Reuven Rivlin to form a new coalition government. Bibi’s hold on power has been hanging by a thread of late. He could hardly fulfill the task he had received as the voices of opposition leaders grew louder, and a touch more indignant, as his policies were even criticized by former allies. As Netanyahu failed, Rivlin tasked Lapid to form a new government.

Bibi’s position was weakening by the day while the protests against his rule maintained their momentum. Israelis staged protests near his Jerusalem residence on many occasions, demanding his resignation.

“Netanyahu’s popularity has waned and the people are tired of inconclusive elections. Likud dropped from 36 seats in March 2020 to 30 in March 2021,” Micheline Ishay, director of the human rights program at the University of Denver told Qatar-based media outlet Al-Jazeera. “Netanyahu’s relentless efforts to avoid prosecution, the split of right-wing parties, and a lingering pandemic have contributed to widespread disenchantment.”

But everything changed in May this year. From a leader-that-no-one-wants Netanyahu became the voice of Israeli aggression in the Gaza Strip. Once again the Palestinians have become the target of the practice of starting an armed conflict to divert attention from the political crisis in the country.

Raids on worshippers at the Al-Aqsa Mosque compound, where hundreds of Palestinians were assaulted by Israeli forces, as well as forced expulsion of Palestinian families from their homes in East Jerusalem's Sheikh Jarrah neighborhood were just the first steps in a mass destruction campaign. Days of violence and brutality were swiftly followed by the bombardment of Gaza. Israeli airstrikes killed hundreds of Palestinians, including children. The offensive injured nearly 2,000 people and left thousands without shelter. For a while, everyone in Israel forgot about Netanyahu and his position in the government.

The goal was achieved. The conflict with the Palestinians lessened public discontent with Netanyahu as he pledged to continue the bloodshed until the mission is complete.

“His popularity will undoubtedly rise among some citizens as a result of this escalation with Gaza. Under fire and in war situations, people tend to rally behind the existing government, fearing both rockets and internal threats. In this sense the current crisis is strengthening Netanyahu’s political designs,” Ishay said. Enlisting the support of Israeli politician Benny Gantz, who earlier sided with the opposition, Netanyahu was feeling confident.

According to a Channel 12 report, Netanyahu and the Blue and White leader even discussed a potential coalition partner after the conflict with Gaza was over. The two formed a power-sharing government last May that was marred by constant strife and dysfunction. It finally collapsed last December, leading to an unsuccessful election on March 23. Throughout his career Netanyahu made clear his stance on Palestinians, underlining that Israel is not a state for all its citizens.

“Israel is the nation-state of the Jewish people – and it alone,” he once said. However, over the course of the latest election campaign, Netanyahu switched tactics and made an open attempt to enlist the support of Arab Israelis. The reason for this turnaround was simple: he believed that legitimizing Arab politicians were critical to his political survival, Yohanan Plesner, the president of the Israel Democracy Institute in Jerusalem, writes. Voter participation among Arab Israelis increased from 49% to 65% during the previous three rounds of the 2019-2020 elections – approaching the projected 73% turnout of Jewish Israelis. The United Arab List party even officially recommended Gantz as a candidate for the prime minister to Rivlin, marking the first two times the Arab party did not go neutral and instead made a recommendation to the president. In the ensuing coalition negotiations, the United Arab List was seriously seen as a partner in the formation of a center-left government led by Gantz. Bibi did not stand aside waiting for a new alliance that would be able to resist him and successfully defused the threat by describing the Arab parties as extremists and terrorists. The strategy was not a new one. Back in 1996 his “Netanyahu is good for the Jews” campaign brought him dark glory, while in 2015 he galvanized his supporters by warning that “Arab voters are coming out in droves to the polls.”

Centrist Gantz's stance on Palestine is no different and has not changed over the course of his career.

“6,231 targets were destroyed ... parts of Gaza were sent back to the Stone Age,” Gantz bragged in a 2019 spate of videos titled “Only the strong survive,” in which he emphasized the “successes” the Israeli Defense Forces (IDF) achieved in the Gaza Strip. After two years he echoed his earlier statements, warning that the Israeli airstrikes in Gaza are "just the beginning.”

The recent Egyptian-brokered cease-fire deal brought Netanyahu and Israel to their senses and the ever-present political crisis once more found its place on the country's agenda.

While the Palestinians are happy to see far-right Netanyahu go given the fact their national struggle reached its historic climax over the course of his 12-year tenure, they fear Bennett, a right-wing religious-nationalist, will take his place, a man with an extremely harsh point of view when it comes to the Palestinian issue.

They view Bennett as a West Bank settlement advocate who is unlikely to make any concessions to the Palestinians. He is a vocal supporter of Israeli settlements, which are considered illegal under international law, in the occupied West Bank and East Jerusalem and an advocate for the partial annexation of Palestinian territory. Bennett and his the right-wing Yamina party have been an ardent opponent of the land for peace formulation and Palestinian statehood. He has run on platforms that include annexing Area C of the West Bank.

“On an individual level, there isn’t a great difference between them," Nasser al-Kidwa, a former Fatah Central Committee member, told The Times of Israel newspaper, comparing Bennett and Netanyahu. "Perhaps Bennett would be somewhat more extremist or radical."

Bennett, who was Netanyahu’s former defense minister, is openly opposed to the two-state solution to the Israeli-Palestinian conflict and firmly declared that “no Israeli is going to give up” the occupied West Bank and allow Palestinians to “create a terror state that’s just a few minutes away from my home.”

While serving as economy and trade minister, Bennett comments during a cabinet debate courted controversy.

“I’ve killed lots of Arabs in my life, there’s no problem with that,” Bennett said in 2013, causing a major backlash.

“The next PM of Israel even more openly racist than Netanyahu which you would think is impossible. More unashamed aggression likely to come,” the founder and president of Yaqeen Institute for Islamic Research, Omar Suleiman wrote on Twitter Tuesday. “And all you’re likely to hear from Biden and American politicians are statements of concern while the Palestinians are told to shut up and take it while waiting for this two-state solution Israeli leaders in their own words say will never happen.”

Bennett’s rhetoric is echoed by members of his party. Ayelet Shaked, former minister of justice and current lawmaker in Yamina, is a clear example.

“What’s so horrifying about understanding that the entire Palestinian people is the enemy?” she said in a 2015 Facebook post when she was a member of the Jewish Home party.

In any other country, such a minister would be dismissed, Amnon Be’eri-Sulitzeanu, co-executive director of the Abraham Fund Initiatives shared with The Jerusalem Post. He found it problematic that nobody was complaining about this. Politicians had no complaints when Israeli Culture and Sports Minister Miri Regev proposed reviving Israel's policy of assassinating resistance leaders.

“We must return to the policy of targeted assassinations,” Regev, who is currently a member of the Knesset for Likud, was quoted as saying by Israeli Army Radio.

Future Party leader Lapid, on the other hand, supports negotiations with the Palestinians, although he has also described himself as a "security hawk.” Speaking in Tel Aviv’s ZOA House, Lapid who served in the 2013-2014 Netanyahu government with his newly formed party, called for separation from the Palestinians, but emphasized that they should part paths "on four terms that to me are essential.” First on Lapid's list of conditions for Israel to make peace with Palestinians was security.

“Israeli security should stay in Israeli hands,” he said, adding that the Israeli army should be allowed to enter Palestinian territory if they know of terrorists planning to attack Israelis. His second concern was security boundaries and he was adamant the Jordan Valley remain in Israeli hands. He linked the third condition to the right of return. “There is no such thing as the right of return,” said Lapid, citing the demand of the Palestinians to return to the pre-1948 land. The final requirement is that Jerusalem remains indivisible, “because countries do not divide their own capitals.”

According to experts, these requirements are not in line with the Palestinians' goal and it is unlikely that they will agree to such conditions since a deal with Israel is not worth making if annexation is packaged as peace.

As the opposition leaders moved closer on Wednesday to getting rid of Netanyahu after agreeing on terms with several parties, including one led by Gantz, deals have also been reached with the left-wing Meretz and center-left Labor parties, as well as with former defense minister Avigdor Lieberman's nationalist Yisrael Beitenu party. The United Arab List is also a contender to join the coalition. If that happens, it will be the first time in Israel's history that an independent Arab party has become a member of the government.

Lapid's government is expected to walk a moderate tightrope, dodging more contentious ideological issues. But many are unconvinced, including Dov Waxman, the director of the UCLA Y&S Nazarian Center for Israel Studies. For Waxman, the bottom line is clear, “disagreements among the members make it very unlikely that there will be any real policy changes,” he told Al-Jazeera.