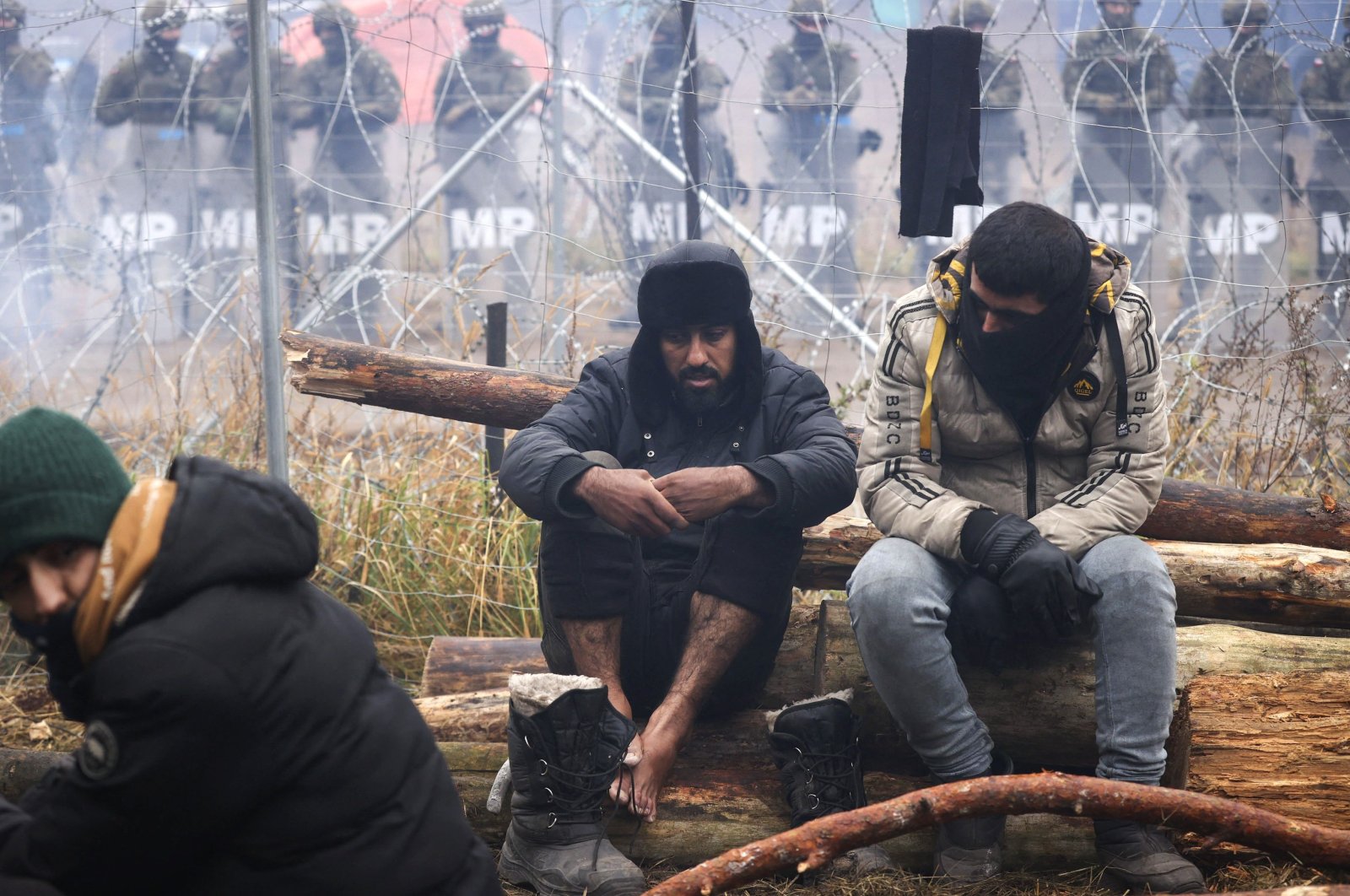 Poland's servicemen stand behind a barbed-wire fence on the Belarusian-Polish border as migrants warm at the fire, on the Belarusian side in the Grodno region on Nov. 14, 2021. (AFP Photo)
by Agencies Nov 15, 2021 10:36 am
RECOMMENDED

Iraq is organizing a repatriation flight this Thursday for its citizens stuck on the Poland-Belarus border on a "voluntary" basis, a government official said.

"Iraq will carry out a first flight for those who wish to return voluntarily on the 18th" from Belarus, Iraqi Foreign Ministry spokesperson Ahmed al-Sahaf told Iraqi television overnight Sunday to Monday.

Earlier on Monday, the authorities said that 571 Iraqi citizens have been identified in eight camps on the border between Belarus and Poland. Al-Sahaf said it is not possible to know the exact number of Iraqis there since the border length of the mentioned countries is 680 kilometers (422 miles). He said the country is planning to send its first flight on Nov. 18 to repatriate Iraqis who want to return voluntarily.

The Iraqi government announced last August that 690 citizens who were at the border area between Belarus and Lithuania were brought back.

Thousands of migrants have traveled to Belarus in the hope of crossing into the European Union (EU), only to find themselves trapped on the border in freezing conditions.

The EU accuses Minsk of orchestrating the crisis to put pressure on the bloc over sanctions, but Belarus has repeatedly denied this. Some countries in the region have warned the stand-off could escalate into a military conflict.

The measures "have reduced the trips by Iraqis (to Belarus) but the problem is that some are now taking indirect flights, passing through Turkey, Qatar, the UAE and Egypt," al-Sahaf said.

On Friday, Turkey banned citizens of Syria, Iraq and Yemen from flying from its airports to Belarus, while private Syrian carrier Cham Wings Airlines on Saturday halted flights to Minsk.

Polish forces described on Sunday an increasingly tense situation on the frontier, with the Border Guard saying migrants were receiving instructions and equipment from Belarusian guards and it expected another "big attempt" to break through.

"Huge logs of wood are being brought in, probably to lower the fence," Border Guard spokesperson Katarzyna Zdanowicz told private broadcaster TVN24, according to Reuters.