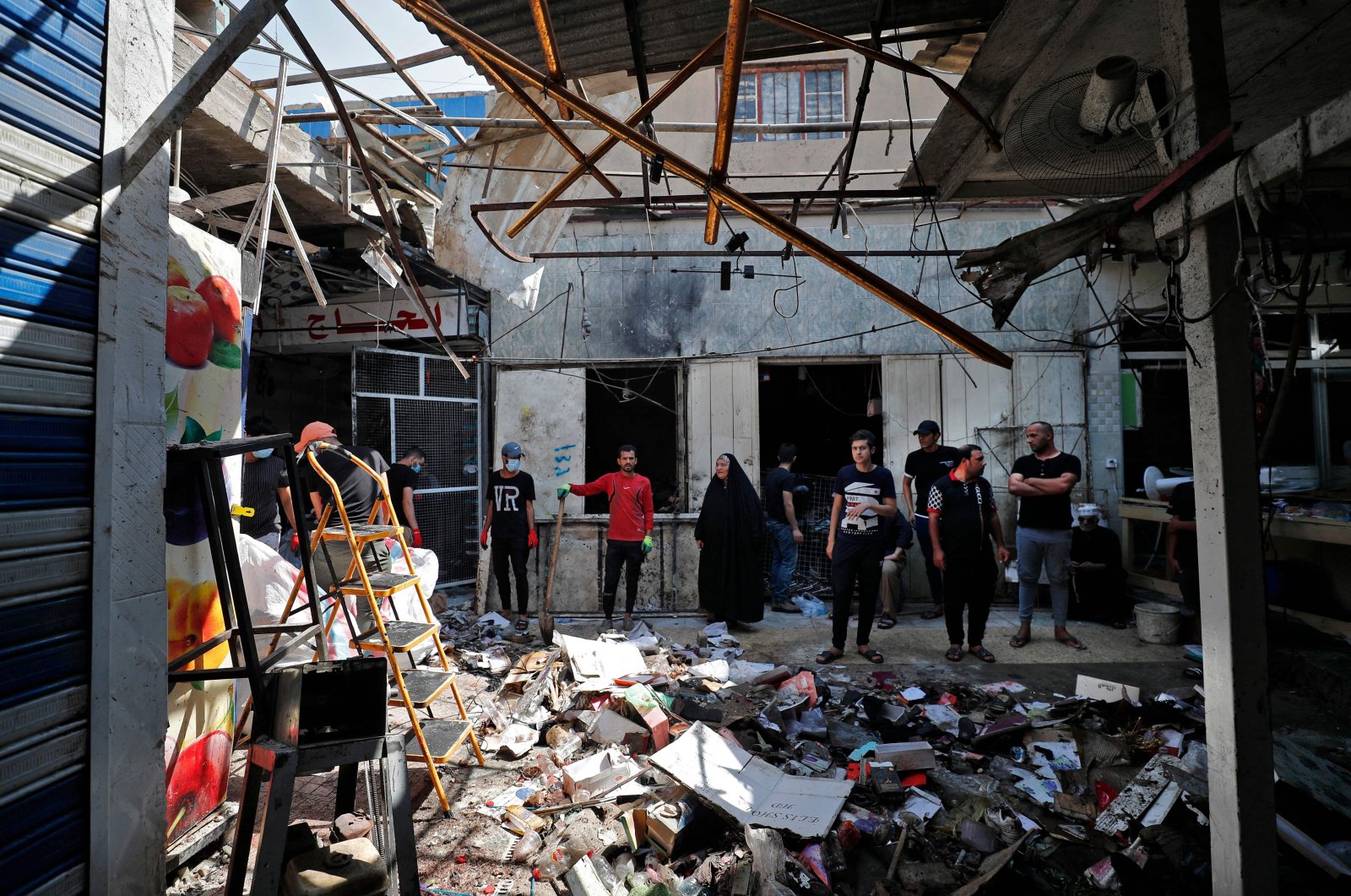 The death toll from the explosion in Iraq's capital Baghdad unofficially rose to 36, with the terrorist group Daesh claiming responsibility for the attack on the eve of Eid al-Adha.

The bloody carnage Monday evening, one of the deadliest attacks in years in the war-scarred country, killed mostly women and children on the eve of Qurban Bayram, or Eid al-Adha, the Muslim Feast of Sacrifice.

It sparked revulsion and renewed fears about the reach of the Daesh, which lost its last territory in Iraq after a grueling campaign that ended in late 2017, but retains sleeper cells in remote desert and mountain areas.

The extremists claimed on the Telegram messenger service that a Daesh suicide bomber had detonated an explosives belt in the bustling Woheilat market of Baghdad's district of Sadr City.

In the panic and chaos of the attack, screams of terror and anguish filled the air. When the smoke cleared, human remains lay strewn amid scattered sandals, market produce and the charred debris of stalls.

Iraqi President Barham Salih condemned the "heinous crime of unprecedented cruelty on the eve of Eid," writing on Twitter that the perpetrators "do not allow people to rejoice, even for a moment."

The United Nations Mission in Iraq said the attack showed that "the scourge of terrorism knows no bounds," while the German Embassy expressed its "sadness after this senseless and brutal attack."

No official death toll has yet been released by Iraqi authorities, but medical sources told Agence France-Presse (AFP) on Tuesday morning that at least 36 people were killed and about 60 wounded.

Prime Minister Mustafa al-Kadhimi said the "cowardly attack illustrates the failure of terrorists to regain a foothold after being defeated by our heroic security forces" and vowed that "terrorism will not go unpunished."

The attack came days before Kadhimi was to meet U.S. President Joe Biden in Washington, and months ahead of a scheduled parliamentary election in October.

"This is a clear message that IS is still present and is able to strike targets in Baghdad," said Osama al-Saidi, head of the Iraqi Political Science Association, referring to Daesh by a different acronym.

"Whenever elections approach, terror attacks happen with the aim of sending a political message that those governing are weak."

Deadly attacks were common in Baghdad during the sectarian bloodletting that followed the U.S.-led invasion of 2003, and later on as Daesh swept across much of Iraq.

Iraq declared Daesh defeated in late 2017 after a fierce three-year campaign and attacks became relatively rare in the capital – until January this year when a twin suicide bombing claimed by Deash killed 32 people in a Baghdad market.

The U.S.-led coalition that supported Iraq's campaign against Deash has significantly drawn down its troop levels over the past year, citing the increased capabilities of Iraqi forces.

They carry out air strikes, drone surveillance and training of Iraqi forces.

U.S. forces have come under repeated attack from Shiite paramilitary groups, integrated into the Iraq security apparatus, that support neighboring Iran, the archenemy of the United States.

Parliament Speaker Mohamed Halbousi called for "leadership changes among senior security officials who have proven their dereliction of duty."

Lawmaker Adnan Al-Zurfi accused commanders of the Falcon Cell counterterrorism unit of having turned from "intelligence gathering to politics."

Iraqi analyst Jassem al-Moussaoui said the attack highlights "the weakness of the security forces which have not been formed on a professional basis but according to their political loyalties."

Many ordinary Iraqis meanwhile shared their grief, exhaustion and sense of helplessness in a country that has endured decades of war and insurgency, as well as an ongoing economic and political crisis.

In a widely shared social media post, comedian Ahmed al-Basheer recalled that only days ago at least 60 people died when a fire tore through a COVID-19 hospital unit in the southern city of Nasiriyah.

"Every day there's a new calamity," he wrote. "We're tired of everything."