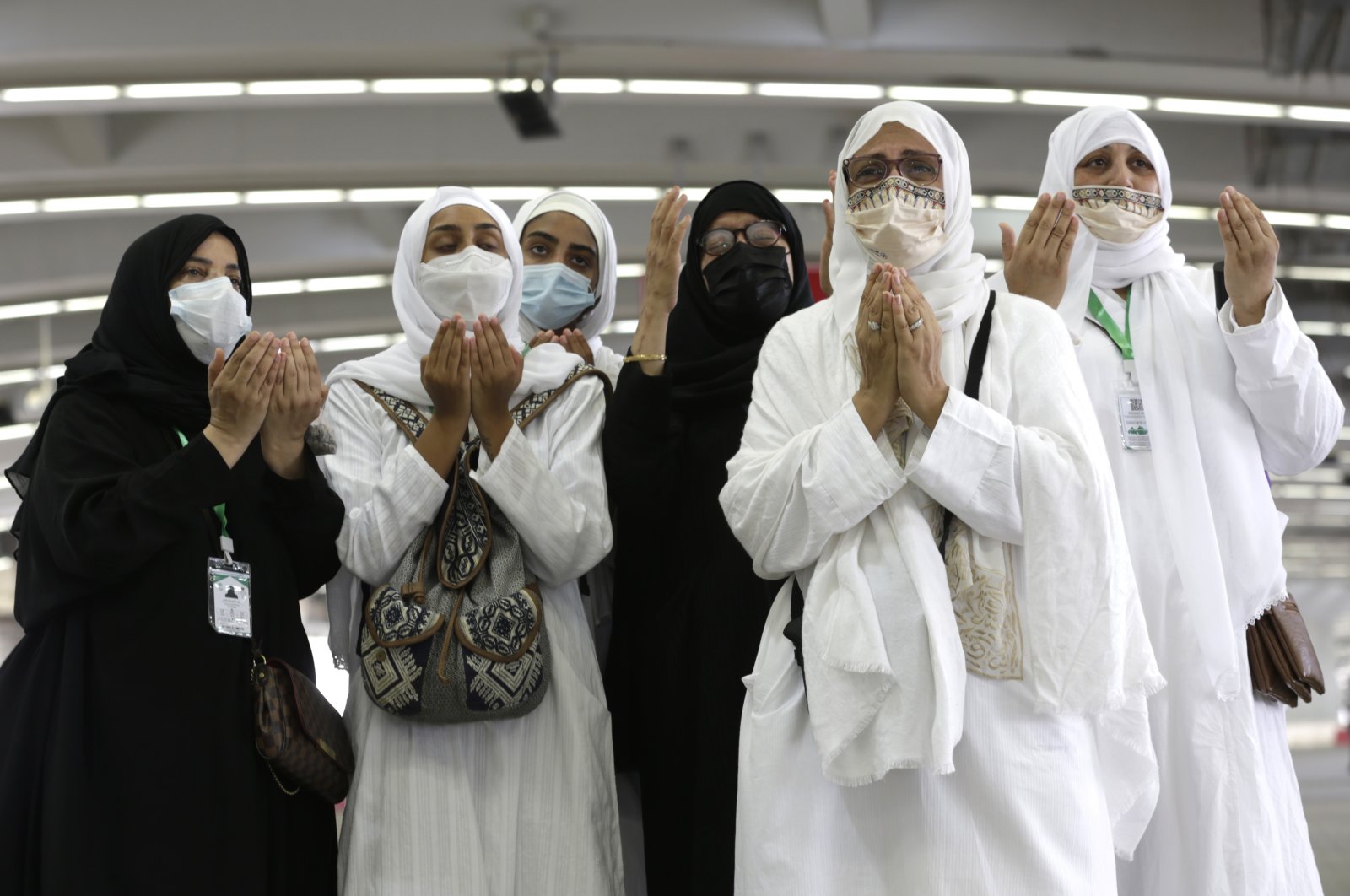 Muslim pilgrims pray during the symbolic stoning of the devil ritual during the hajj pilgrimage in Mina, near the holy city of Mecca, Saudi Arabia, July 20, 2021. (AP Photo)
by ASSOCIATED PRESS Jul 20, 2021 11:29 am
RECOMMENDED

Muslims around the world on Tuesday observed yet another major Islamic holiday in the shadow of the pandemic, backdropped by growing concerns about the highly infectious delta variant of the coronavirus.

Eid al-Adha, or the "Feast of Sacrifice,” is typically marked by communal prayers, large social gatherings and, for many, slaughtering of livestock and giving meat to the needy. This year, the holiday comes as many countries battle the delta variant first identified in India, prompting some to impose new restrictions or issue appeals for people to avoid congregating and follow safety protocols.

The pandemic has already taken a toll for the second year on a sacred mainstay of Islam, the hajj, whose last days coincide with Eid al-Adha. Once drawing some 2.5 million Muslims from across the globe to the holy city of Mecca in Saudi Arabia, the Islamic pilgrimage has been dramatically scaled back due to the virus.

This year, 60,000 vaccinated Saudi citizens or residents of Saudi Arabia have been allowed to perform the hajj, preventing Muslims from other countries from fulfilling the Islamic obligation.

Indonesia marked a grim Eid al-Adha amid a devastating new wave of coronavirus cases in the world’s most populous Muslim-majority nation. Large gatherings were banned and tougher travel restrictions imposed.

Vice President Ma’ruf Amin appealed to people to perform holiday prayers at home with their families.

"Don’t do crowds,” Amin said in televised remarks ahead of the start of the holiday. "Protecting oneself from the COVID-19 pandemic is obligatory.”

The surge is believed to have been fueled by travel during another holiday – the Eid al-Fitr festival in May – and by the rapid spread of the delta variant.

In Malaysia, measures have been tightened after a sharp spike in infections despite a national lockdown since June 1 – people are banned from traveling back to their hometowns or crossing districts to celebrate. House visits and customary trips to graveyards are also banned.

Healthy worshippers are allowed to gather for prayers in mosques, with strict social distancing and no physical contact. Ritual animal sacrifice is limited to mosques and other approved areas.

Health Director-General Noor Hisham Abdullah has urged Malaysians not to "repeat irresponsible behavior,” adding that travel and celebrations during Eid al-Fitr and another festival on the island of Borneo led to new clusters of cases.

"Let us not in the excitement of celebrating the Feast of Sacrifice cause us all to perish because of COVID-19,” he said in a statement.

"I appeal to you all to be patient and abide by the rules because your sacrifice is a great struggle in Allah’s sight and in our effort to save lives,” he said in a televised speech on the eve of the festival.

The World Health Organization (WHO) has reported that COVID-19 deaths had climbed after a period of decline. The reversal has been attributed to low vaccination rates, relaxed mask rules and other precautions, and the delta variant.

Lockdowns will severely curtail Eid al-Adha festivities in Sydney and Melbourne, Australia’s two largest cities. Sydney resident Jihad Dib, a New South Wales state government lawmaker, said the city’s Muslims were sad but understood why they would be confined to their homes with no visitors allowed.

"It’s going to be the first Eid in my life I don’t hug and kiss my mum and dad,” Dib told Australian Broadcasting Corp.

Melbourne Muslims face their second Eid al-Adha in lockdown in as many years. The sudden announcement of the Melbourne lockdown last week will also deal a huge financial blow to retailers who had stocked up on food ahead of what they thought would be usual Eid festivities.

Iran on Monday imposed a week-long lockdown on the capital, Tehran, and the surrounding region as the country struggles with another surge in the coronavirus pandemic, state media reported. The lockdown begins on Tuesday.

Not everyone is imposing new restrictions. In Bangladesh, authorities have allowed an eight-day pause in the country’s strict lockdown for the holiday that health experts say could be dangerous.

In Egypt, Essam Shaban traveled to his southern hometown of Sohag to spend Eid al-Adha with his family. He said ahead of the start of the holiday that he planned to pray at a mosque there on Tuesday while taking precautions such as bringing his own prayer rug and wearing a mask.

"We want this Eid to pass by peacefully without any infections,” he said. "We must follow instructions.” Shaban had been looking forward to pitching in with his brothers to buy a buffalo to slaughter, going door-to-door to give some of the meat to the poor and to the traditional festive meal later in the day with his extended family. "It’s usually boisterous with laughter and bickering with the kids,” he said. "It’s great.”

But others will be without loved ones. In India, where Eid al-Adha starts Wednesday, Tahir Qureshi would always go with his father for prayers and then to visit family and friends. His father died in June after contracting the virus during a surge that devastated the country, and the thought of having to spend the holiday without him is heartbreaking.

"It will be difficult without him,” he said. India's Muslim scholars have been urging people to exercise restraint and adhere to health protocols. Some states have restricted large gatherings and are asking people to observe the holiday at home.

Meanwhile the pandemic’s economic fallout, which threw millions of Indians into financial hardship, has many saying they cannot afford to buy sacrificial livestock.

In Indian-controlled Kashmir, a disputed, Muslim-majority region, businessperson Ghulam Hassan Wani is among those cutting back. "I used to sacrifice three or four sheep, but this year we can hardly afford one,” Wani said.