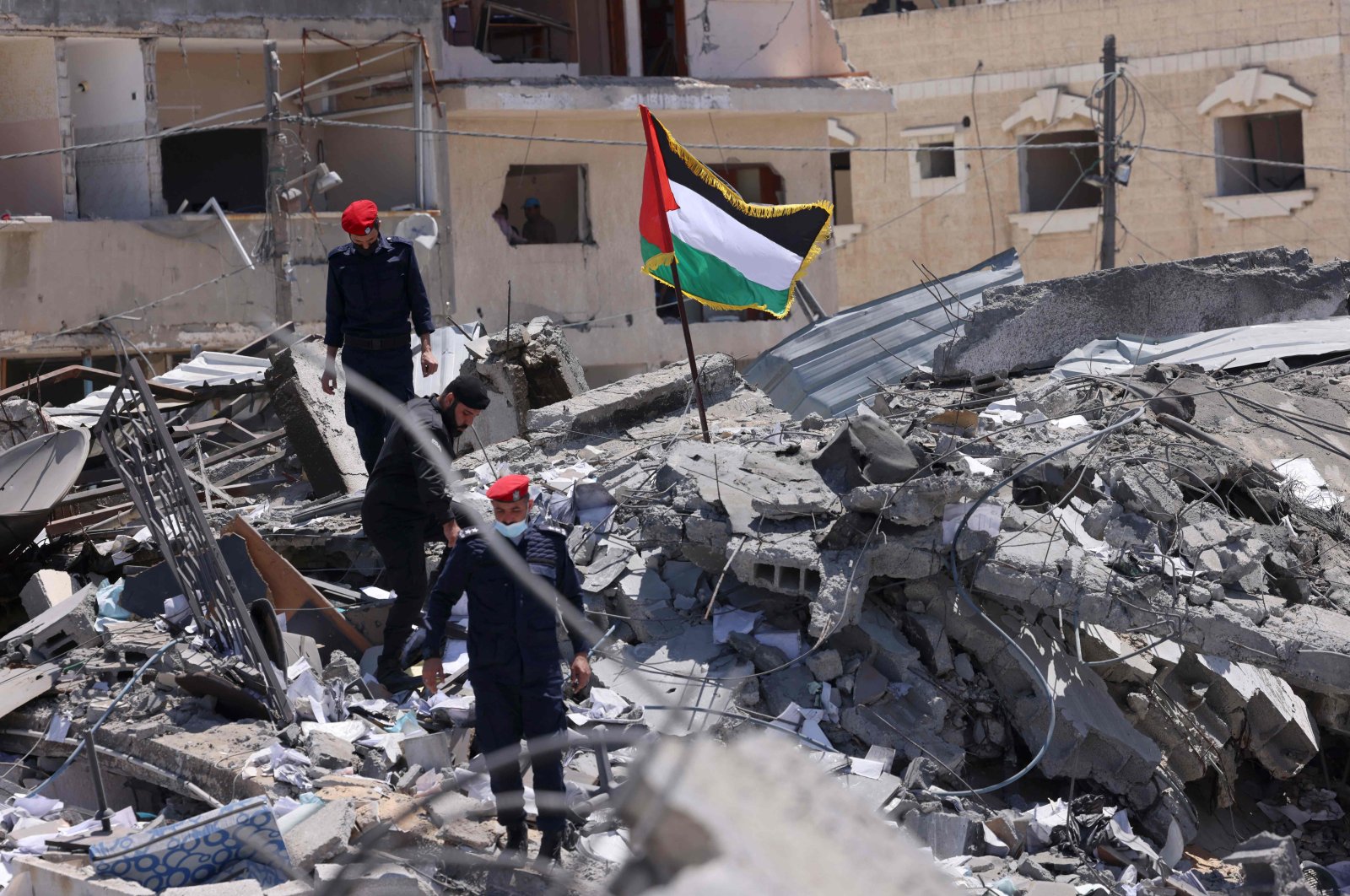 After years of hard work to rebuild houses that were destroyed by Israeli bombing seven years ago, Gazans are once again left on the street after recent airstrikes turned their homes into mounds of stones and dust

While Palestinians fight for their houses in in East Jerusalem's Sheikh Jarrah neighborhood after Israel approved a decision to evict several families from their homes in favor of Israeli settlers, Gazans have been left homeless after Tel Aviv's recent offensive air campaign grounded residential buildings and left thousands without shelter.

It took Ramez al-Masri three years to rebuild his home after it was destroyed in a 2014 Israeli offensive. When war returned to the area last week, it took just a few seconds for the house to be flattened again in an Israeli airstrike.

The despondent al-Masri once again finds himself among the thousands of Gazans left homeless by another war between Israel and the territory’s Hamas rulers. He and the 16 others who lived in the two-story structure are scattered at relatives’ homes, uncertain how long they will remain displaced as they wait with hope for international aid to help them rebuild the home.

“My children are scattered — two there, three here, one there. Things are really very difficult,” he said. “We live in death every day as long as there is an occupation,” he said, referring to Israel’s rule over Palestinians, including its blockade of Gaza.

The United Nations estimates that about 1,000 homes were destroyed in the 11-day war that ended last Friday. Lynn Hastings, the U.N. humanitarian coordinator for the region, said hundreds of additional housing units were damaged so badly they are likely uninhabitable.

The destruction is less extensive than in the 50-day war of 2014, in which entire neighborhoods were reduced to rubble and 141,000 homes were either wiped out or damaged.

But following that war, international donors quickly pledged $2.7 billion in reconstruction assistance for the battered enclave. It remains unclear this time around whether the international community, fatigued from the global COVID-19 crisis and years of unsuccessful Mideast diplomacy, will be ready to open its wallet again.

It was 3 a.m. on Wednesday when the phone call from Israel came to a neighbor ordering everyone in the area to evacuate. “Leave your homes, we are going to bomb,” al-Masri says they were told.

The neighborhood is home to members of al-Masri’s extended family. At the time of the warning, he said no one knew which house might be targeted. But he could not believe that the airstrike hit the two-floor home where he lived with his eight children, his brother’s family and their mother.

“If we knew someone was wanted, we would not have stayed here from the outset,” he said.

Al-Masri, who owns a small grocery store, said neither he nor his brother has anything to do with the military. The airstrike turned his home into a crater. On Sunday, the massive hole was filled with murky water spewing from broken water and sewage lines.

Seven adjacent homes belonging to relatives were badly damaged. Their walls were blown up, exposing the colorful interior decorations of the living and bedrooms. The blast was so powerful that concrete support beams were weakened and the houses are likely beyond repair.

On Sunday, a mobile pump was deployed to suck the stinky water out as bulldozers worked to reopen streets. City workers were removing damaged power lines. But much of the rubble remained uncleared.

After the 2014 war, al-Masri bounced around between rental homes and “caravans” – small metal huts that dotted hard-hit areas of Gaza like shantytowns. He dreads the thought of returning to the temporary shelters.

“Life was disastrous in the caravans. We were living between two sheets of tin,” he said, adding that he hopes the international community “will stand by us, try to help us so we can rebuild quickly.”

During the recent fighting, Israel unleashed hundreds of airstrikes across Gaza at what it said were militant targets. Hamas and other resistance groups fired more than 4,000 rockets toward Israel.

The fighting began May 10 after tensions were mounting in East Jerusalem during the Muslim holy month of Ramadan and spread to Gaza as a result of Israeli assaults on worshippers in the flashpoint Al-Aqsa Mosque compound and the neighborhood of Sheikh Jarrah. Heavy-handed police tactics at the compound and the threatened eviction of dozens of Palestinian families by Israeli settlers had inflamed tensions. A cease-fire between Israel and Hamas started early Friday.

The true costs of the war will not be known for some time. Palestinian health officials said 279 Palestinians, including 69 children and 40 women, were killed in the fighting.

On Sunday morning, hundreds of municipal workers and volunteers started a one-week campaign to clear rubble from Gaza City’s streets. Outside a flattened high-rise building, workers loaded rubble into donkey carts and small pickup trucks. Next to a destroyed government building, children collected cables and whatever recyclable leftovers they could sell for a few shekels.

Hastings said that the UN would launch an appeal to repair the damage in the densely populated besieged Gaza Strip, where there is a threat of COVID-19 spreading further.

“The escalation has exacerbated an already dire humanitarian situation in Gaza, generated by nearly 14 years of blockade and internal political divisions, alongside recurrent hostilities,” Hastings said in a statement issued from the enclave on Sunday. “We must also ensure support to continue addressing needs that already existed, including those arising from the ongoing pandemic.”

Palestinian authorities began distributing tents and mattresses in the Gaza Strip on Saturday, as the United Nations Office for the Coordination of Humanitarian Affairs (OCHA) said at least 6,000 people were left homeless in the bombing. Trucks with medicines, food and fuel arrived to Gaza on Friday through the Karem Abu Salem checkpoint after Israel reopened it. According to Palestinian officials, the cost of rebuilding the territory is tens of millions of dollars.

“If I had 50 sons, I would tell them to go and fight Israel,” sitting under an olive tree near his destroyed house in Gaza, Abu Yahya said. Last week, an Israeli air attack turned his home into rubble, and he promised to sleep in the ruins.

“My family has asked me to leave it, not to sleep here, but I won’t budge,” he told Qatar-based media outlet Al-Jazeera. “Here is my home.”

In Beit Hanoun, one of the homes that was struck last week belonged to Nader al-Masri, Ramez’s cousin and a long-distance runner who participated in dozens of international competitions. Since he lost his house in the 2014 war, Nader, 41, has lived on the second of floor of a three-floor home belonging to relatives. The third and the first floors sustained heavy hits. A room filled with medals and trophies that Nader collected through his 20-year career was damaged. Fortunately, he said, many of his mementos survived.

Nader al-Masri is familiar with loss. Beit Hanoun, situated just along the frontier with Israel, has frequently been the scene of heavy fighting, and his home has been damaged two previous times.

“I had over 150 trophies. In each of the previous wars, I lost one or two or three,” he said. Some 20 glass awards have been shattered over the years. “Each war the number drops,” he said, showing a medal from the 2008 Beijing Summer Olympics.

As a world-class runner from 1998 to 2018, Nader was one of Gaza’s most famous residents, especially after Israel and Egypt imposed a blockade on Gaza following Hamas’ takeover of the territory in 2007. The blockade often prevented him from traveling abroad to compete. In many cases, he arrived just in time for his races.

On Sunday, debris filled his apartment. The ceiling of his daughters’ bedroom was cracked. The bright layers of paint had fallen off, exposing gloomy, dark plaster. School backpacks lay on the ground among shards and debris.

Nader, now a coach with the Palestinian Athletics Federation, moved his five children to their uncle’s house.

“I’m an athlete and have nothing to do with politics,” he said. “Things are difficult because we cannot build a home every day.”