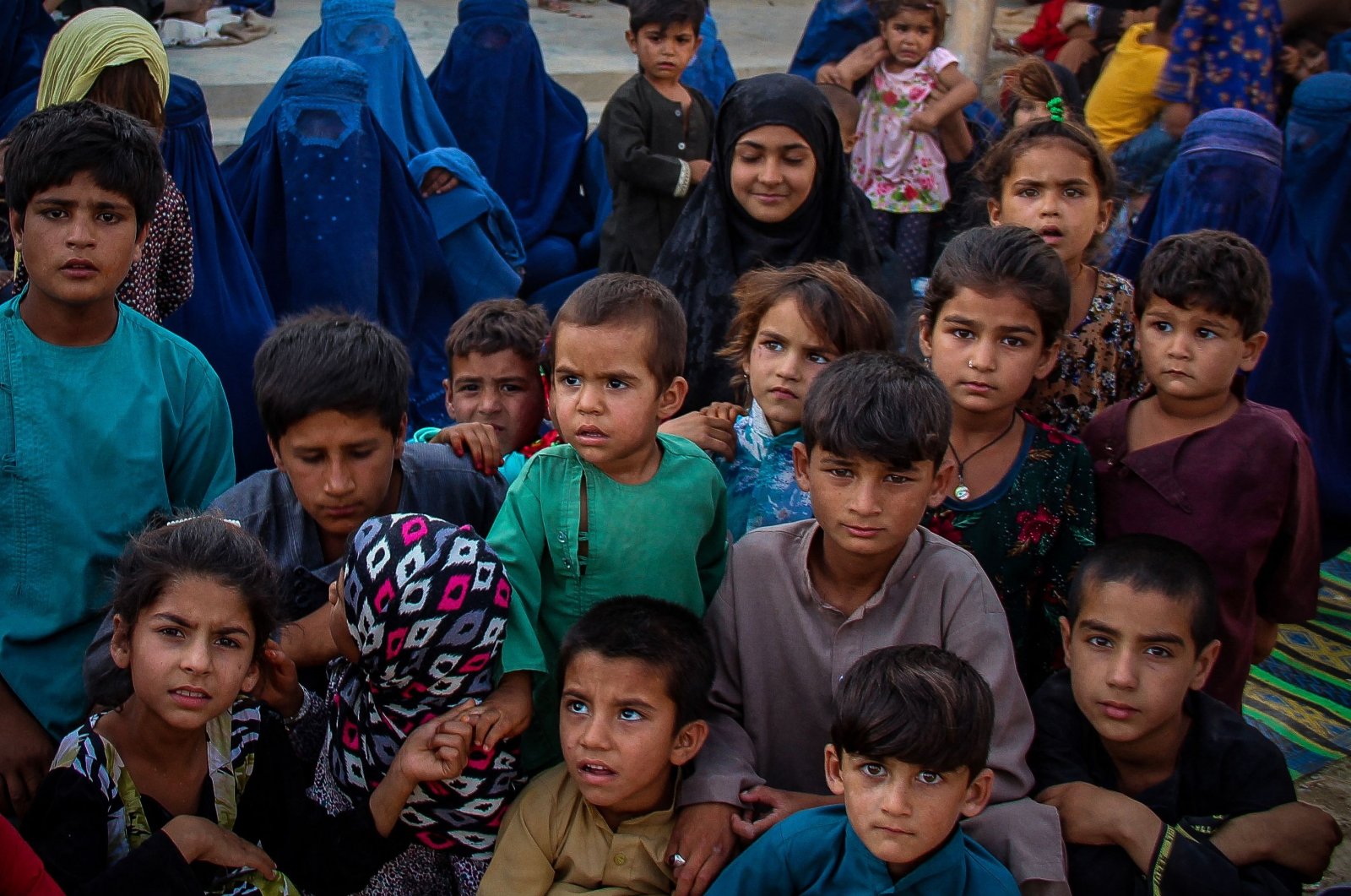 Children from internally displaced Afghan families arriving from the districts of Khan Abad, Ali Abad and Imam Sahib who fled from ongoing battles between Taliban and Afghan security forces, look on inside the premises of a school in Kunduz city, Afghanistan, June 26, 2021. (AFP Photo)
by French Press Agency - AFP Jun 26, 2021 6:58 pm
RECOMMENDED

Days of fighting between the Taliban and Afghanistan's government forces have made about 5,000 families flee from their homes in Kunduz, officials said Saturday, with the insurgents continuing to surround the key northern city.

The Taliban briefly seized the city twice in recent years but have now captured the surrounding districts and a nearby border crossing with Tajikistan.

"About 5,000 families have been displaced by the fighting," Ghulam Sakhi Rasouli, director of the Kunduz Refugees and Repatriation Department, told Agence France-Presse (AFP).

He said up to 2,000 of those families had fled to Kabul and other provinces.

Many people took refuge in a school in the city and had been provided with food and other relief items, Kunduz provincial council member Ghulam Rabbani Rabbani said.

Video footage taken by AFP showed dozens of people, many of them women and children, sitting inside tents set up in a school compound.

"We are six families living together here for three days ... you can see my children are sitting on the ground," Juma Khan, who fled with his family, told AFP.

"We have still not received any help. A team came today to survey some families but after a few minutes they left," said Akhtar Mohammad, who has also taken refuge in the school.

Another 8,000 families have been displaced across the province of Kunduz following a month of sporadic clashes between the insurgents and government forces, Rasouli added.

He said authorities were unable to provide relief items to all the displaced families across the province.

Kunduz city's public health director Ehsanullah Fazli said that since the fighting erupted more than a week ago, 29 civilians have been killed and 225 wounded.

Fighting has raged across Kunduz province for days, with the Taliban and Afghan forces engaged in bloody battles.

On Tuesday the insurgents captured Shir Khan Bandar, Afghanistan's main border crossing with Tajikistan, in one of their most significant gains in recent months.

Since early May, the Taliban have launched several major offensives targeting government forces across the rugged countryside and say they have seized nearly 90 of the country's more than 400 districts.

Many of their claims are disputed by the government and difficult to independently verify.

Violence surged after the United States military began the withdrawal of its last remaining 2,500 troops from the country to meet the Sept. 11 deadline announced by President Joe Biden to end America's longest-ever war.