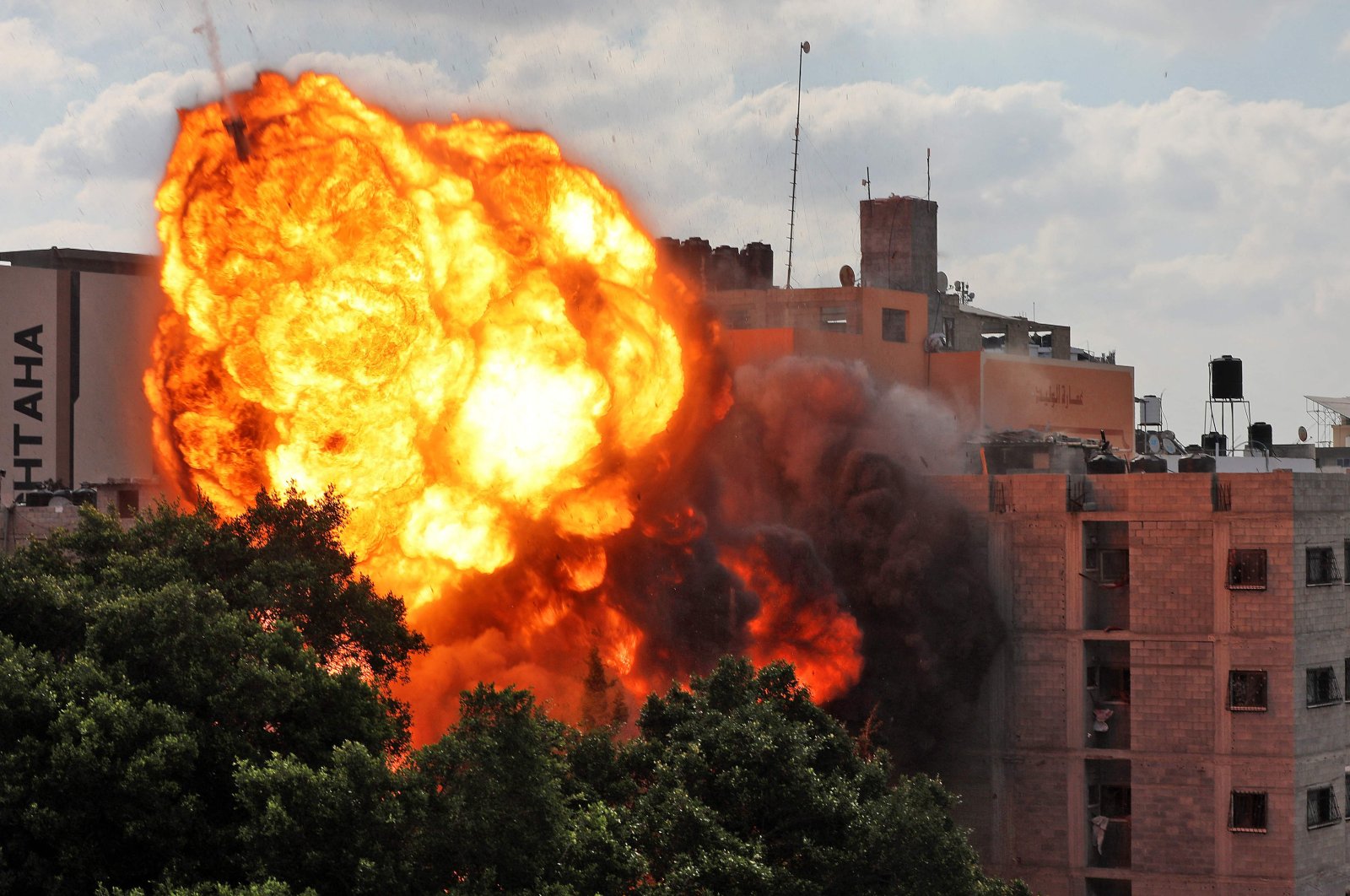 A ball of fire engulfs the Al-Walid building that was destroyed in an Israeli airstrike on Gaza city early in the morning, May 13, 2021. (AFP Photo)
by Agencies May 14, 2021 9:00 am
RECOMMENDED

The death toll from Israeli attacks on Gaza has increased to 122, the Palestinian Health Ministry said in a statement on Thursday.

The fatalities include 31 children and 20 women, while over 900 people have been injured to date, the ministry statement said, as per the Anadolu Agency (AA).

Authorities in Israel, meanwhile, said seven people have been killed in retaliatory fires so far.

Israel on early Friday threatened a ground invasion as the army said it was massing troops along the Gaza frontier and calling up 9,000 reservists ahead of a possible ground operation. Meanwhile, Israeli artillery pounded northern Gaza which brought the front lines of the conflict closer to dense civilian areas.

“I said we would extract a very heavy price from Hamas," Israeli Prime Minister Benjamin Netanyahu said in a videotaped statement. "We are doing that, and we will continue to do that with heavy force.”

Masses of red flames illuminated the skies as deafening blasts from the outskirts of Gaza City jolted people awake.

In the northern Gaza Strip, Rafat Tanani, his pregnant wife and four children were killed after an Israeli warplane reduced the building to rubble, residents said. Sadallah Tanani, a relative, said the family was “wiped out from the population register” without warning. “It was a massacre. My feelings are indescribable,” he said.

The current eruption of violence began a month ago in Jerusalem, where heavy-handed Israeli police tactics during Ramadan and the threatened eviction of dozens of Palestinian families by Jewish settlers ignited protests and clashes with police. A focal point of clashes was Jerusalem’s Al-Aqsa Mosque, built on a hilltop compound that is revered by Jews and Muslims.

The fighting reached a breaking point on Monday after Israeli forces stormed the mosque and injured hundreds of Palestinians. The four-day burst of violence has pushed Israel into uncharted territory – dealing with the most intense fighting it has ever had with Hamas while simultaneously coping with the worst Jewish-Arab violence inside Israel in decades. A late-night barrage of rocket fire from Lebanon that landed in the sea threatened to open a new front along Israel’s northern border.