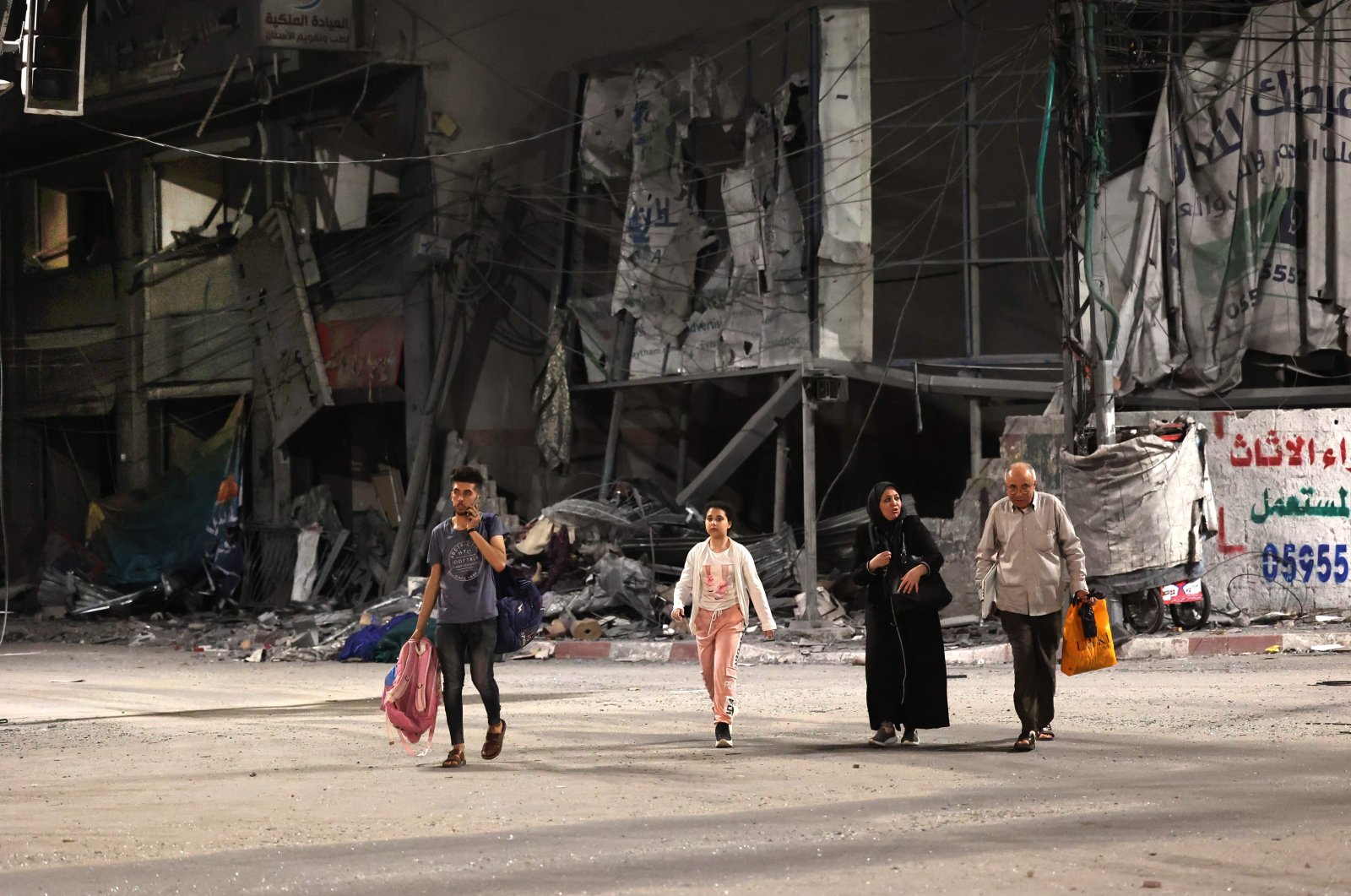 Palestinian families are pictured in a street after evacuating their homes east of Gaza City on May 13, 2021, due to heavy shelling by the Israeli military. (AFP Photo)
by Daily Sabah with Agencies May 14, 2021 12:48 am
RECOMMENDED

The Israeli military on early Friday said ground forces were involved in an attack on the Gaza Strip in a move largely seen as an announcement of a ground invasion, yet the extent of the operation remained unclear after vague statements by authorities.

The confusion came after the Israeli army tweeted a brief statement saying “IDF air and ground troops are currently attacking in the Gaza Strip.”

When asked to clarify the statement, army spokesman Jonathan Conricus confirmed to reporters that Israeli soldiers had entered the Palestinian enclave.

“All I can say it that air and ground offensives have been launched on the Gaza Strip,” Adraee said, adding that he could neither confirm nor deny Conricus’ words.

Israel previously said that it was massing troops along the Gaza frontier and calling up 9,000 reservists ahead of a possible ground invasion of the Hamas-ruled territory, as the two sides edged closer to all-out war. Egyptian mediators rushed to Israel in effort to agree on a cease-fire but the talks showed no signs of progress.

The stepped-up fighting came as communal violence in Israel erupted for a fourth night, with Arab and Jewish mobs clashing in the flashpoint town of Lod. The fighting took place despite a bolstered police presence ordered by the nation’s leaders.

Masses of red flames illuminated the skies as deafening blasts from the outskirts of Gaza City jolted people awake. The strikes were so strong that people inside the city, several kilometers away, could be heard screaming in fear.

The four-day burst of violence has pushed Israel into uncharted territory — dealing with the most intense fighting it has ever had with Hamas while simultaneously coping with the worst Arab-Jewish violence inside Israel in decades. A late-night barrage of rocket fire from Lebanon that landed in the sea threatened to open a new front along Israel’s northern border.

Weary Palestinians had already prepared for a somber bayram, as Gaza braced for more Israeli airstrikes and communal violence raged across Israel after weeks of protests and violence in Jerusalem.

The current eruption of violence began a month ago in Jerusalem, where heavy-handed Israeli police tactics during Ramadan and the threatened removal of dozens of Palestinian families from their homes by Jewish settlers ignited protests and police attacks on Palestinians. A focal point was the Al-Aqsa Mosque, built on a hilltop compound that is revered by Jews and Muslims, where police fired tear gas and stun grenades at protesters.

The violence has set off violent clashes between Arabs and Jews in Israel, in scenes unseen in more than two decades. Israeli Prime Minister Benjamin Netanyahu warned that he was prepared to use an “iron fist if necessary” to calm the violence.

But violence re-erupted across the country late Wednesday. Jewish mobs attacked Arabs in the central city of Lod, the epicenter of the troubles, despite a state of emergency and nighttime curfew. In nearby Bat Yam, a mob of Jewish nationalists attacked an Arab motorist, dragged him from his car and beat him until he was motionless.

Many Muslim-majority countries have slammed Tel Aviv for the violence and called for an immediate stop to the Israeli aggression.