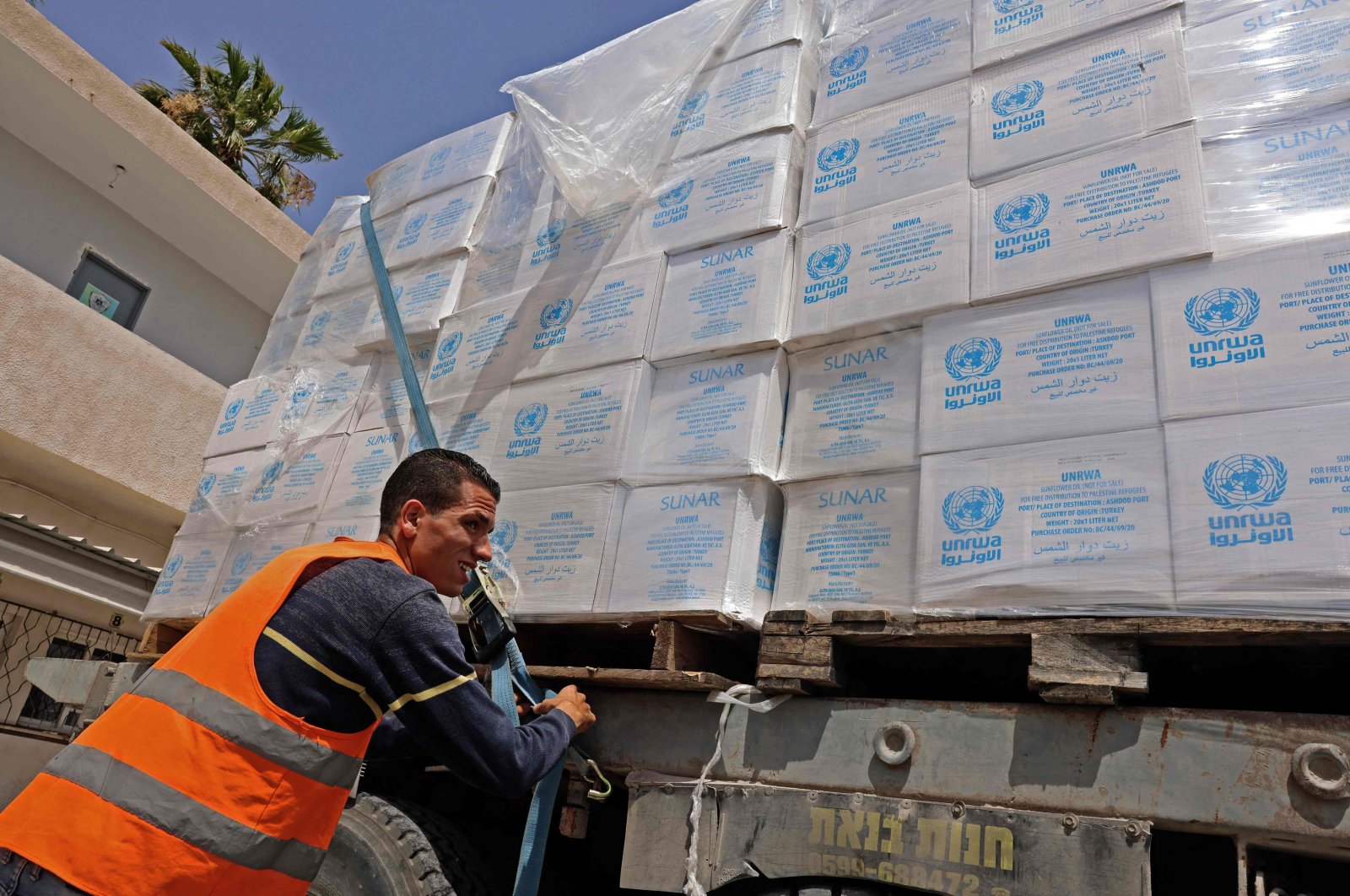 A truck loaded with humanitarian aid, passes into Rafah in the southern Gaza Strip, through the Kerem Shalom crossing, the main passage point for goods entering Gaza from Israel, May 21, 2021. (AFP Photo)
by French Press Agency - AFP May 22, 2021 9:16 am
RECOMMENDED

Humanitarian aid began to enter the Gaza Strip on Saturday following a cease-fire that stopped an 11-day Israeli assault on the Palestinian enclave.

As thousands of displaced Palestinians returned to their homes Friday, international focus turned to the reconstruction of the bomb-shattered Gaza.

In Jerusalem, however, Israeli police cracked down on Muslim worshippers at the highly sensitive Al-Aqsa Mosque compound, in a sign of how volatile the situation remains, two weeks after similar brutality shown by the Israeli forces sparked the worst escalation in years.

Israeli forces beat an Agence France-Presse (AFP) photographer who was covering the unrest there.

Israeli forces cracked down on Palestinians in several other parts of Israeli-occupied East Jerusalem, and at the crossing point between Jerusalem and the West Bank, Israeli police said, adding that hundreds of officers and border guards had been mobilized.

U.S. President Joe Biden said he had told the Israelis to stop "intercommunal fighting" in Jerusalem, and pledged to help organize efforts to rebuild Gaza.

Convoys of trucks carrying aid began passing into Gaza through the Kerem Shalom crossing after it was reopened by Israel, bringing much-needed medicine, food and fuel.

Tens of thousands of Gaza residents ventured out Friday for the first time in days, checking on neighbors, examining devastated buildings, visiting the sea and burying their dead.

Rescuers there said they were working with meagre resources to reach any survivors still trapped under the rubble.

Nazmi Dahdouh, 70, said an Israeli strike had destroyed his home in Gaza City.

"We don't have another home. I'll live in a tent on top of the rubble of my home until it's rebuilt," the father of five said.

In total, Israeli airstrikes and artillery bombardments have killed 248 people, including 66 children, since May 10, and wounded 1,948 others, the health ministry has said.

Large areas have been flattened and some 120,000 people have been displaced, according to Hamas.

The Israeli army said Gaza resistance groups fired more than 4,300 rockets towards Israel, of which 90% were intercepted by its air defenses.

The rockets claimed 12 lives in Israel, including one child, a teenager and an Israeli soldier, with one Indian and two Thai nationals among those killed, Israeli authorities said. Some 357 people in Israel were wounded.

"Our message to the enemy is clear – if you come back, we'll come back too," a spokesperson for the armed groups in Gaza said at a press conference, while Israeli Defense Minister Benny Gantz warned that "the enemy" had no immunity.

"I believe we have a genuine opportunity to make progress and I'm committed to working toward it," Biden said.

The European Union echoed his call for a two-state solution to the conflict.

The U.S. State Department said top diplomat Antony Blinken would "meet with Israeli, Palestinian and regional counterparts in the coming days to discuss recovery efforts and working together to build better futures for Israelis and Palestinians."

Turkey welcomed the cease-fire, while underlining that a permanent solution needs to be found to the problem based on two states.

Russia and China called for a return to peace talks, and U.N. chief Antonio Guterres said Israel and the Palestinians must now have "a serious dialogue to address the root causes of the conflict."

He too called for "robust" reconstruction aid.

The flare-up began in Jerusalem, sacred to Jews, Muslims and Christians.

Its holy sites have sparked many of the worst episodes of Israeli-Palestinian violence.

On May 10, an Israeli police crackdown on Palestinian worshippers at the Al-Aqsa Mosque compound prompted Hamas to launch rockets into the Jewish state.

Israel's military responded with airstrikes on what it described as "military targets" in Gaza – though Palestinian and international groups have accused it of recklessly hitting non-military sites in the densely populated strip.

The unrest also fueled violence between Jews and Israeli Arabs in mixed cities.

Israeli forces have assaulted Palestinian protesters in the West Bank and East Jerusalem. At least 25 Palestinians have been killed.