Israel bans thousands of Palestinians from praying at Al-Aqsa Mosque 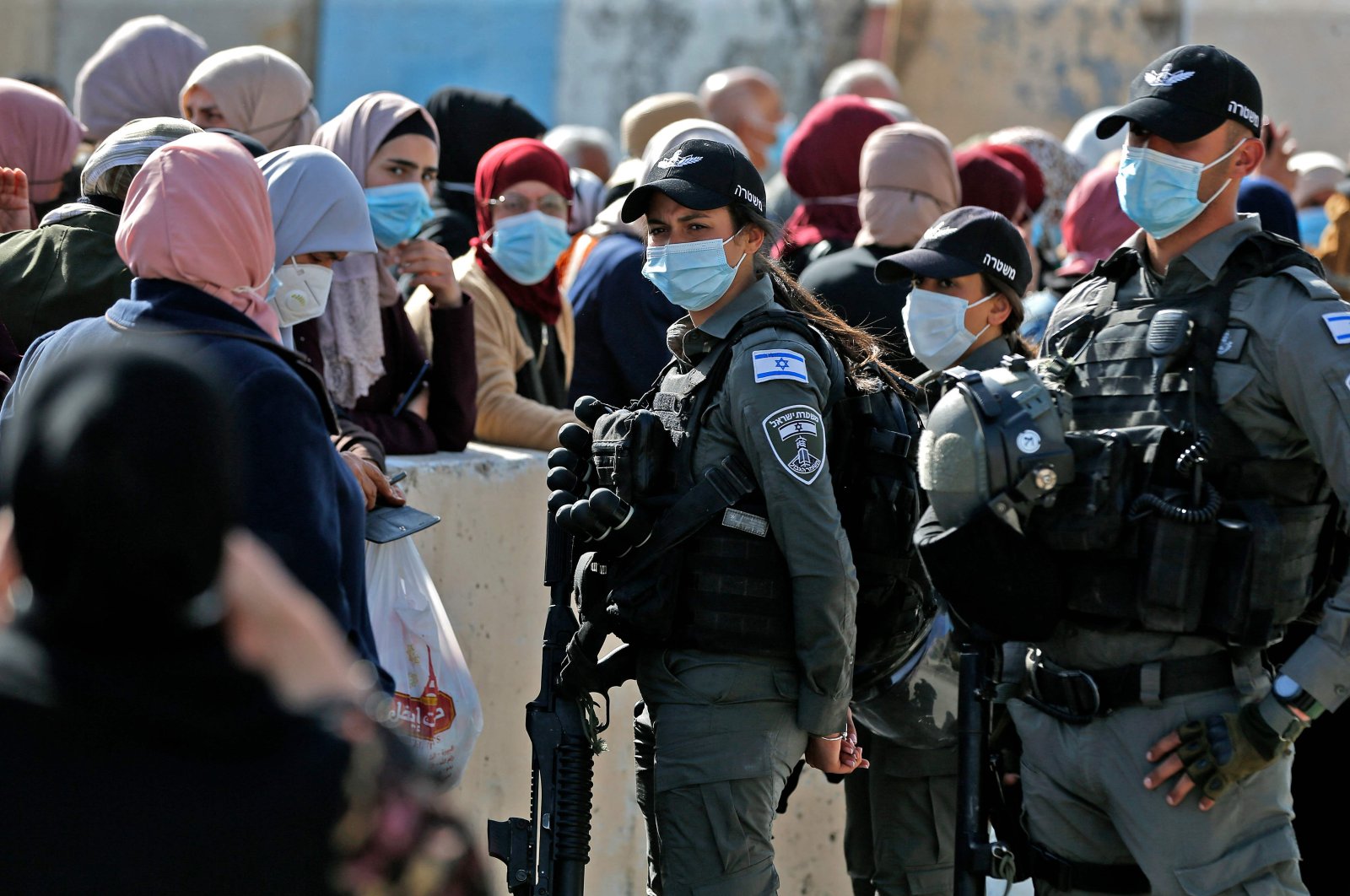 Members of the Israeli security forces man the Qalandia checkpoint near the West Bank town of Ramallah, as Palestinian women wait to enter Jerusalem to attend the first Friday prayers of the Muslim fasting month of Ramadan at the Al-Aqsa Mosque, on April 16, 2021. (AFP Photo)
by Agencies Apr 16, 2021 3:39 pm
RECOMMENDED

Israeli authorities restricted tens of thousands of Palestinians on Friday from entering the historical Al-Aqsa Mosque in Jerusalem on the first Friday of the Muslim holy month of Ramadan, arguing that only those who have received a COVID-19 vaccine may visit the holy site, even though there are not enough doses available.

Israel first allowed hundreds of Palestinians from the occupied West Bank with special permits to enter Jerusalem. But it also stipulated that those who want to perform the prayers must have taken the COVID-19 vaccine, which prevented thousands from participating in the prayers.

COGAT, Israel's military body that administers the West Bank, said 10,000 vaccinated Palestinians had been issued permits this year to enter Jerusalem for prayers. Police shut down roads around Jerusalem as busses loaded with pilgrims drove in. Inside Al-Aqsa mosque, Palestinian men and women sat on the carpeted floor, reading the Quran. As the prayers ended, worshippers walked out of the holy compound with folded prayer rugs slung over their shoulders.

There is an insufficient quantity of vaccines available in the West Bank as vaccination is limited to those with chronic diseases and those over age 60, according to the Palestinian Health Ministry.

Earlier this week, Palestinians accused Israel of breaking into four mosque minarets and cutting wires to prevent the call for prayers from being broadcast on loudspeakers.

Abu Sway of the Waqf said the action came after Islamic officials refused to turn off loudspeakers Wednesday during a memorial for fallen Israelis at the adjacent Western Wall. Israeli police did not comment on the accusation. Jordan, custodian of Islamic sites in Jerusalem, condemned what it called Israel's "blatant" violation of the status quo and accused it of provocation.

"We were blocked from entering Jerusalem and praying at Al-Aqsa,” Palestinian resident Samya Abdel-Aziz told Anadolu Agency (AA), adding: "Israel invokes the coronavirus vaccine to limit worshipers from entering Al-Aqsa and emptying it in a step to control it.”

"We uphold our right to the mosque and we demand international and human rights intervention to deter the occupying state (Israel)," she said.

Sheikh Azzam al-Khatib, head of the Waqf Islamic affairs council, told Agence France-Presse (AFP) an estimated 70,000 worshippers came in from Jerusalem, the Israeli-occupied West Bank and from Arab communities inside Israel. Last Ramadan, "they (Israeli authorities) did not allow anyone to enter Al-Aqsa except for me," he said.

In the Gaza Strip, Israel did not allow residents to head to Al-Aqsa Mosque for prayer.

For years, worshipping at Al-Aqsa has been limited to residents of occupied East Jerusalem and Arab cities and towns in Israel. Al-Aqsa Mosque is the world's third-holiest site for Muslims. Jews call the area the Temple Mount, claiming it was the site of two Jewish temples in ancient times.