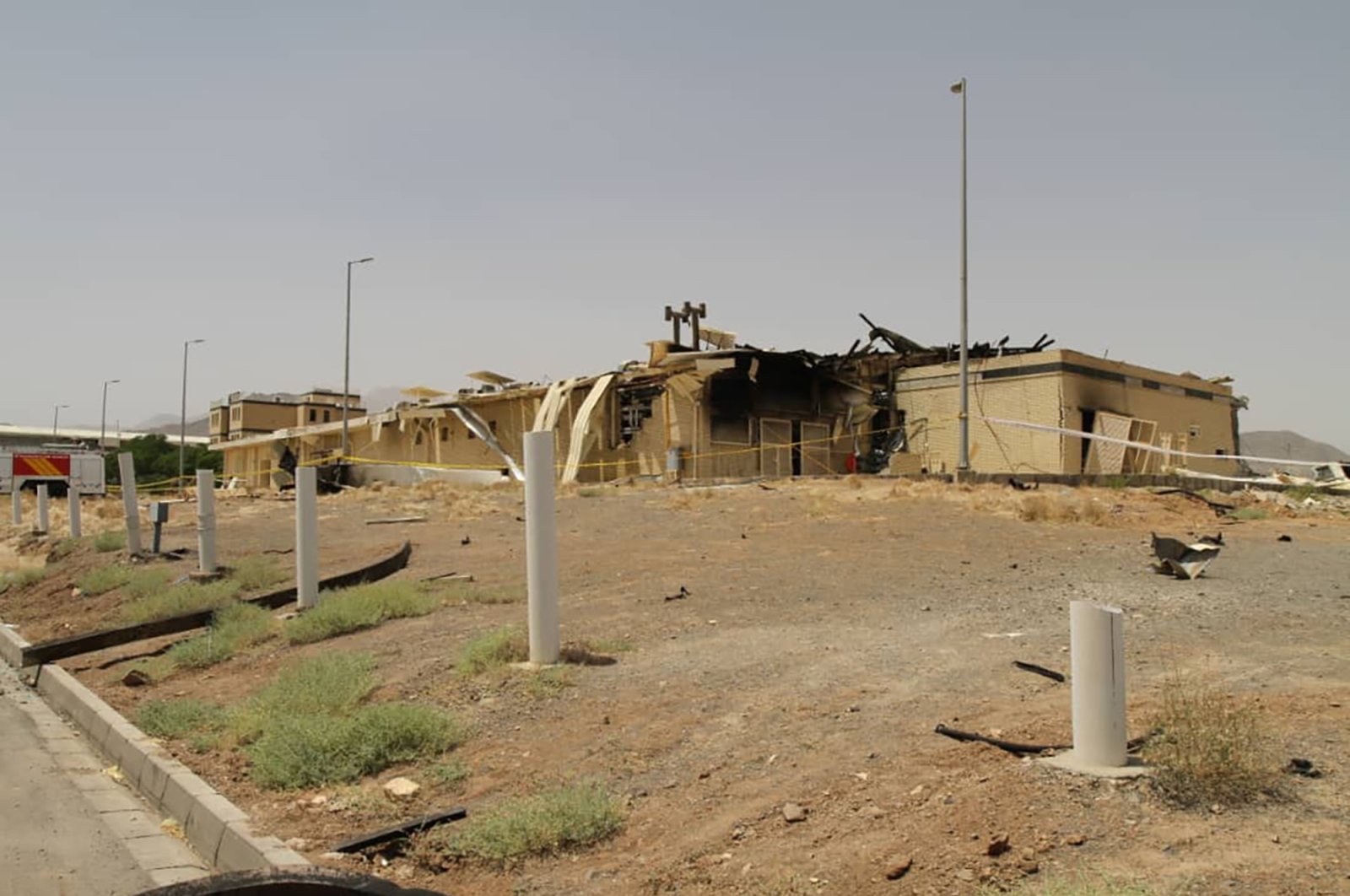 Security tape rings a building after it was damaged by a fire at the Natanz uranium enrichment facility, some 200 miles (322 kilometers) south of the capital Tehran, Iran July 2, 2020, July 2, 2020. (AP via release by the Atomic Energy Organization of Iran)
by Associated Press Jun 11, 2021 9:20 am
RECOMMENDED

The outgoing chief of Israel's Mossad intelligence service has offered the closest acknowledgment yet that his country was behind recent attacks targeting Iran's nuclear program and a military scientist.

The comments by Yossi Cohen, speaking to Israel's Channel 12 investigative program “Uvda” in a segment aired Thursday night, offered an extraordinary debriefing by the head of the typically secretive agency in what appears to be the final days of Prime Minister Benjamin Netanyahu's rule.

It also gave a clear warning to other scientists in Iran's nuclear program that they too could become targets for assassination even as diplomats in Vienna try to negotiate terms to try to salvage its atomic accord with world powers.

“If the scientist is willing to change career and will not hurt us anymore, than yes, sometimes we offer them" a way out, Cohen said.

Among the attacks that have targetted Iran, none have struck deeper than two explosions over the last year at its Natanz nuclear facility, where centrifuges enrich uranium from an underground hall designed to protect them from airstrikes.

In July 2020, a mysterious explosion tore apart Natanz's advanced centrifuge assembly, which Iran later blamed on Israel. Then in April of this year, another blast tore apart one of its underground enrichment halls.

Discussing Natanz, the interviewer asked Cohen where he would take them if they could travel there, he said “to the cellar" where “the centrifuges used to spin.”

“It doesn't look like it used to look,” he added.

Cohen did not directly claim the attacks, but he specificity offered the closest acknowledgment yet of an Israeli hand in the attacks. The interviewer, journalist Ilana Dayan, also seemingly offered a detailed description in a voiceover of how Israel snuck the explosives into Natanz's underground halls.

“The man who was responsible for these explosions, it becomes clear, made sure to supply to the Iranians the marble foundation on which the centrifuges are placed,” Dayan said. "As they install this foundation within the Natanz facility, they have no idea that it already includes an enormous amount of explosives.”

They also discussed the November killing of Mohsen Fakhrizadeh, an Iranian scientist who began Tehran's military nuclear program decades ago. U.S. intelligence agencies and the International Atomic Energy Agency (IAEA) believe Iran abandoned that organized effort at seeking a nuclear weapon in 2003. Iran has long maintained its program is peaceful.

While Cohen on camera doesn't claim the killing, Dayan in the segment described Cohen as having "personally signed off on the entire campaign.” Dayan also described how a remotely operated machine gun fixed to a pickup truck killed Fakhrizadeh and later self-destructed.

Cohen described an Israeli effort to dissuade Iranian scientists from taking part in the program, which had seen some abandon their work after being warned, even indirectly, by Israel. Asked by the interviewer if the scientists understood the implications if they didn't stop, Cohen said, “They see their friends.”

They also talked about Israel's operation seizing archival documents from Iran's military nuclear program. Dayan said 20 agents, none Israelis, seized material from 32 safes, then scanned and transmitted a large portion of the documents. Cohen confirmed that Mossad received most of the material before it was physically taken out of Iran.

Cohen defended Netanyahu's decision to go public with the results of the operation, going against a long-standing practice of secrecy involving Mossad activities.

“It was important to us that the world will see this, but this thing should also resonate with the Iranian leadership, to tell them, ‘Dear friends: One, you have been infiltrated. Two, we see you ... Three, the era of ... lies is over,'” Cohen said.

Media in Israel operate under a decades-old policy that requires journalists to clear stories involving security matters through military censors. That Cohen's remarks apparently cleared the censors suggests Israel wanted to issue a new warning to Iran amid the Vienna nuclear negotiations.

Iran has repeatedly complained about Israel's attacks, with Iran's ambassador to the IAEA, Kazem Gharibabadi, warning as recently as Thursday that the incidents “not only will be responded to decisively, but also certainly leave no option for Iran but to reconsider its transparency measures and cooperation policy.”

Iran's mission to the United Nations did not immediately respond to a request for comment over the comments by Cohen, who was replaced by former operative David Barnea.

Cohen in the interview acknowledged he might one day seek the prime minister's office himself.