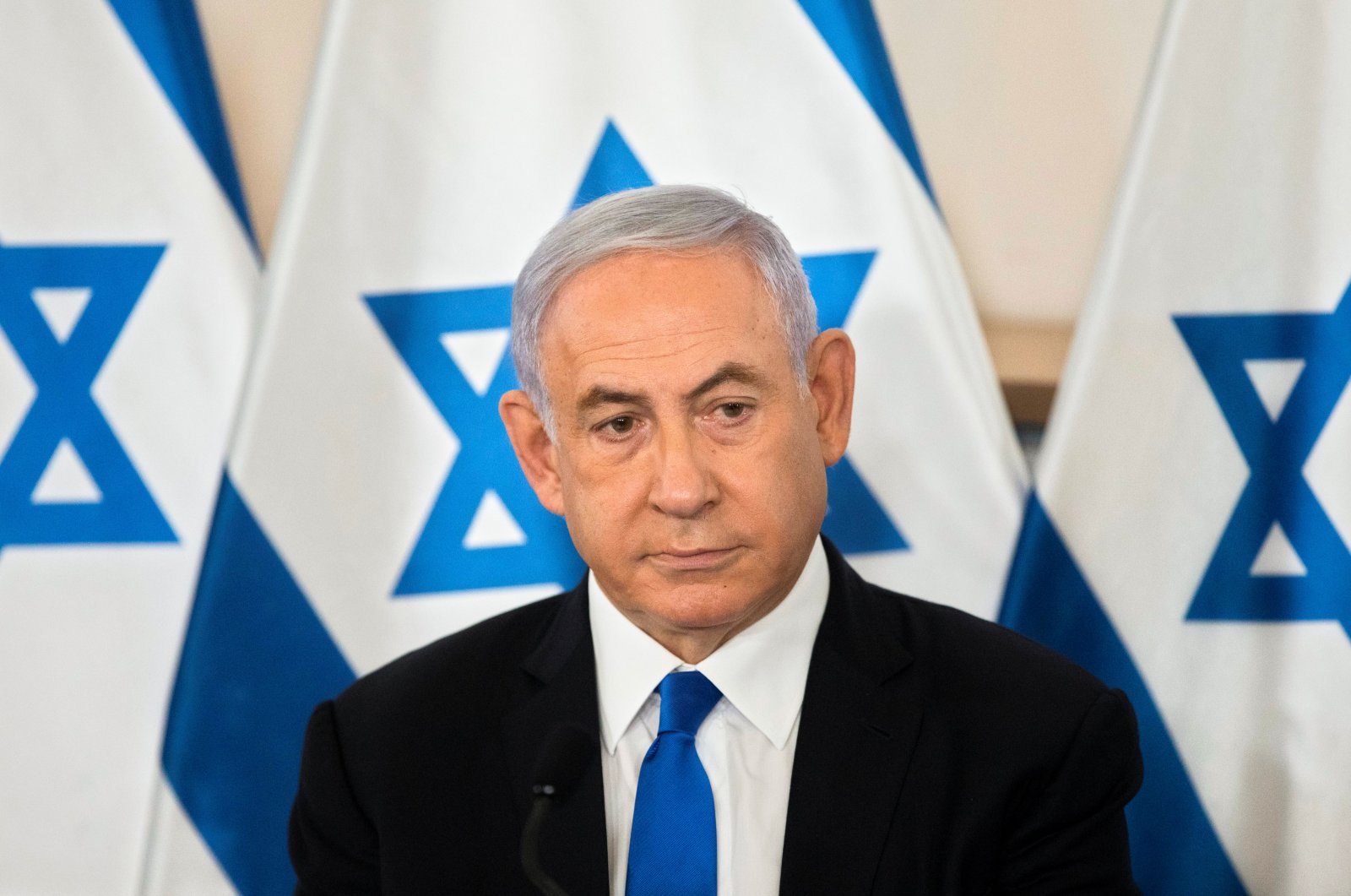 Israeli Prime Minister Benjamin Netanyahu looks on during a briefing to ambassadors to Israel at a military base in Tel Aviv, Israel, May 19, 2021. (Sebastian Scheiner / Pool via Reuters)
by Daily Sabah with AP May 19, 2021 9:21 pm
RECOMMENDED

Israeli Prime Minister Benjamin Netanyahu vowed Wednesday to press ahead with a fierce military offensive in the Gaza Strip, which has left scores of Palestinian civilians including children dead, pushing back against calls from the United States to wind down the operation.

Netanyahu's tough comments marked the first public rift between the two otherwise close allies since the fighting began last week and could complicate international efforts to reach a cease-fire.

Israel continued to indiscriminately pound targets in Gaza with airstrikes, while Palestinian resistance group Hamas bombarded Israel with rocket fire throughout the day. In another sign of potential escalation, a rocket barrage was also fired from Lebanon into northern Israel.

After a visit to military headquarters, Netanyahu said he appreciated “the support of the American president,” but he said Israel would push ahead to return “calm and security” to Israeli citizens.

He said he was “determined to continue this operation until its aim is met.”

Netanyahu's remarks came after even its most staunch ally, the U.S., called for a de-escalation of the conflict as President Joe Biden told the Israeli premier that he expected "a significant de-escalation today on the path to a cease-fire,” the White House said.

Biden had previously avoided pressing Israel more directly and publicly for a cease-fire with Gaza's Hamas. But pressure has been building for Biden to intervene more forcefully as other diplomatic efforts gather strength.

Egyptian negotiators have also been working to halt the fighting, and an Egyptian diplomat said top officials were waiting for Israel’s response to a cease-fire offer. The diplomat spoke on condition of anonymity in line with regulations. Meanwhile, German Foreign Minister Heiko Maas said he would fly to the region Thursday for talks with Israelis and Palestinians.

Israel’s Foreign Ministry said the foreign ministers of Slovakia and the Czech Republic would also arrive in Israel Thursday, and that the diplomats were invited by Foreign Minister Gabi Ashkenazi “to express their solidarity and support” for Israel.

Earlier in the day, the Israeli military said it was widening its strikes on targets in southern Gaza. At least nine civilians were killed by Israeli airstrikes on Wednesday in the Gaza Strip.

The current round of fighting between Israel and Hamas began May 10, when the resistance group fired long-range rockets toward Jerusalem after days of clashes between Palestinian protesters and Israeli police at the Al-Aqsa Mosque compound, a flashpoint site sacred to Jews and Muslims. Heavy-handed police tactics at the compound and the forced eviction of dozens of Palestinian families by Jewish settlers had inflamed tensions.

Since then, Israel has launched hundreds of airstrikes that it says have targeted Hamas’ infrastructure.

At least 227 Palestinian civilians have been killed, including 64 children and 38 women, with 1,620 people wounded, according to the Gaza Health Ministry, which does not break the numbers down into fighters and civilians. Hamas and Islamic Jihad say at least 20 of their fighters have been killed, while Israel says the number is at least 130. Some 58,000 Palestinians have been forced to flee their homes due to Israel's indiscriminate bombing.

Twelve people in Israel, including a 5-year-old boy, a 16-year-old girl and a soldier, have also been killed.

In Gaza, one of the Israeli airstrikes destroyed the home of an extended family.

Residents surveyed the piles of bricks, concrete and other debris that had once been the home to 40 members of al-Astal family in the southern Gaza town of Khan Younis.

Ahmed al-Astal, a university professor, described a scene of panic, with men, women and children racing out of the building.

“We had just gotten down to the street, breathless, when the devastating bombardment came,” he said. “They left nothing but destruction, the children’s cries filling the street ... This is happening, and there is no one to help us.”

Another strike in nearby Deir al-Balah killed a man, his wife and their 2-year-old daughter, witnesses said. Iyad Salha, a brother of the man who was killed, said the family had just sat down for lunch when the missile hit.

Among those killed Wednesday were a reporter for Hamas-run Al-Aqsa radio and two people who died when warning missiles crashed into their apartment.

The Israeli military said it was striking a tunnel network in southern Gaza, with 52 aircraft hitting 40 underground targets.

Since the fighting began, Gaza’s infrastructure, already weakened by a 14-year blockade illegally imposed by Israel, has rapidly deteriorated. Medical supplies, water and fuel for electricity are running low in the territory, on which Israel and Egypt imposed the blockade after Hamas seized power in 2007.

Israeli attacks have damaged at least 18 hospitals and clinics and destroyed one health facility, the World Health Organization said. Nearly half of all essential drugs have run out.

Among the buildings leveled by Israeli airstrikes was one housing The Associated Press' Gaza office and those of other media outlets.

Netanyahu has alleged that Hamas military intelligence was operating in the building. Secretary of State Antony Blinken said Tuesday that Israel had given the U.S. information about the bombing, without elaborating.

The AP has called for an independent investigation. The news organization's president, Gary Pruitt, has said the AP had no indication Hamas was present in the building.

The fighting, the worst since a 2014 war between Israel and Hamas, has ignited protests around the world and inspired Palestinians in Israel and the occupied territories to call a general strike Tuesday. It was a rare collective action that spanned boundaries central to decades of failed peace efforts. Israel captured the West Bank, East Jerusalem and Gaza in the 1967 Six-Day War, territories the Palestinians want for their future state.