Israel eases some restrictions on Gaza Strip amid unrest 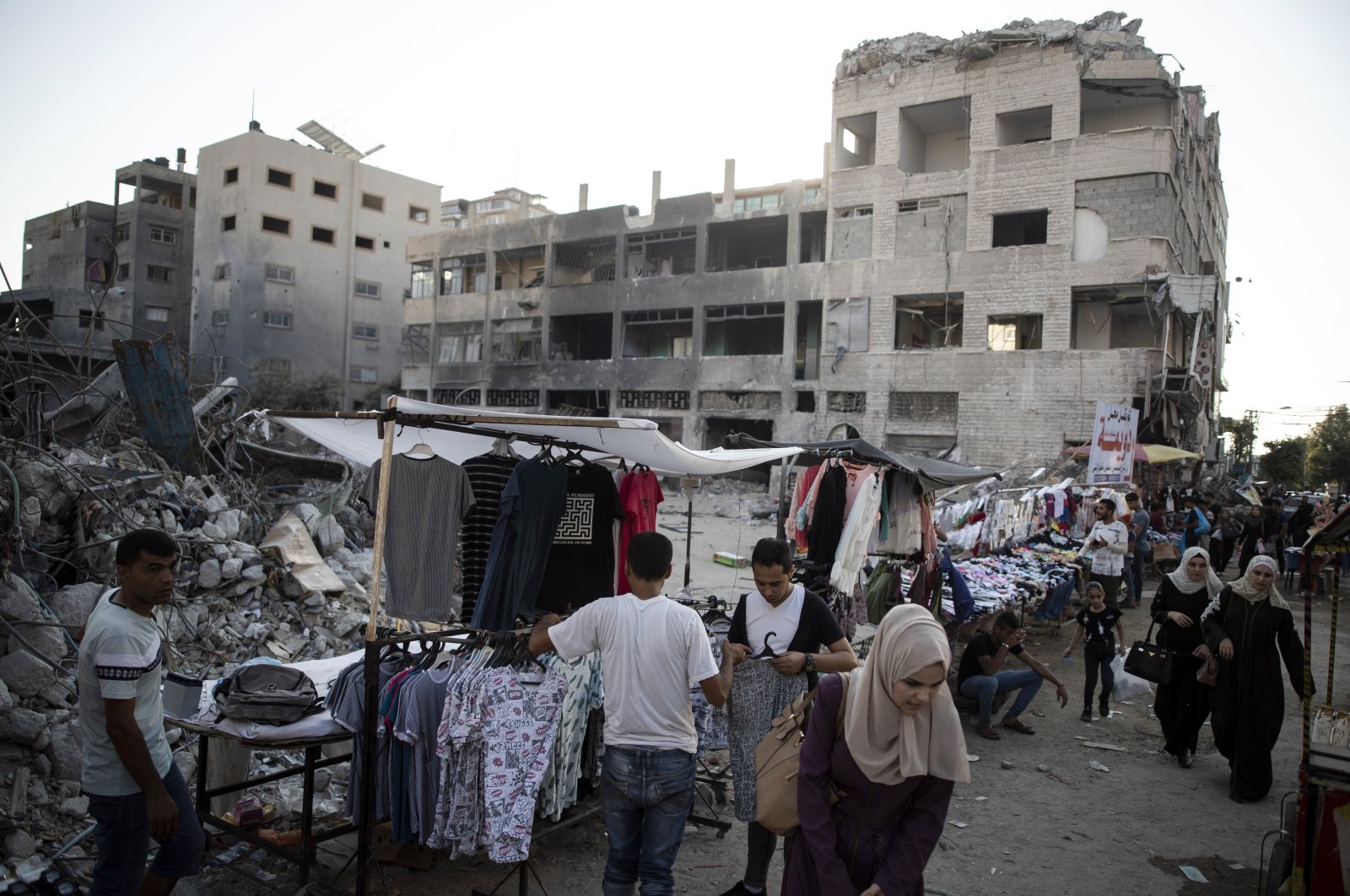 Palestinian street vendors display clothes for sale next to the rubble of destroyed buildings that were hit by Israeli airstrikes in Gaza City, Palestine, July 18, 2021. (AP Photo)
by Agencies
Sep 01, 2021 8:59 am

Israel said Wednesday it would expand Gaza's fishing zone, increase its water supply and allow more Palestinian traders and goods to enter Israel, even as violence persisted on the border with Israeli forces assaulting Palestinians across occupied territories.

"It has been decided to expand the fishing zone in the Gaza Strip to 15 nautical miles, as well as to completely open the Kerem Shalom Crossing, for the passage of equipment and goods," read a statement from COGAT, the Israeli military body responsible for civilian affairs in the occupied Palestinian territories. "In addition, the water supply to the Gaza Strip will be increased by additional 5 million cubic meters," it added, according to remarks carried by Agence France-Presse (AFP).

It said the number of Gazan merchants with permits to pass through the Erez Crossing would be increased from 2,000 to 7,000.

In May, Israel and Hamas, the Palestinian resistance group, reached a truce following 11 days of the deadliest fighting in years. Although the Israeli army has been maintaining airstrikes in Gaza, claiming that the attacks were in response to incendiary balloons that have continued to fly from the Palestinian territory, Tel Aviv began expanding the fishing zone off Gaza in July, with COGAT letting traders and goods from Gaza into the country for the first time in over a year beginning Aug. 15.

Less than a week later, on Aug. 21, clashes accompanying a demonstration on the Gaza border wounded around 40 people. Two Palestinians, including a 12-year-old boy and a 32-year-old man, have been killed from Israeli gunfire during recent protests along the border.

The border incident was a return to the marches of 2018, when Gazans began a protest movement demanding an end to Israel's blockade and the right of Palestinians to return to lands they fled or were expelled from when the Jewish state was founded. Critics say the closure amounts to collective punishment.

Near-nightly clashes have taken place since. The Israeli army said that on Tuesday night, "hundreds of rioters and demonstrators" gathered at the fence where "rioters" threw "explosive devices and burning tires" and the army responded with live rounds. COGAT stressed that the "civilian measures" were "conditional upon the continued preservation of the region's security stability for the long term." Israel has maintained a tight blockade on the territory since 2007, the year Hamas took power.

The blockade, which restricts the movement of goods and people in and out of Gaza, has devastated Gaza’s economy. Israel and Hamas have fought four wars since 2008, and Israel has tightened the blockade since the latest fighting in May.

Gisha, an Israeli human rights group that has pushed for an end to the closure, called Tuesday's move "crucial but insufficient, especially given the scope of the damage in Gaza, as well as Israel's legal and moral obligations towards residents of the strip.”

"The situation in Gaza is not simply a humanitarian crisis that can be managed via narrow humanitarian gestures,” Gisha said. "Any meaningful attempt at resolving this dire situation requires much more expansive opening of the strip, underpinned by a broader political process."

The United Nations' special envoy for the Israeli-Palestinian conflict urged the parties on Monday to hold additional rounds of high-level talks following a meeting between Israeli Defense Minister Benny Gantz and Palestinian President Mahmoud Abbas. Gantz and Abbas met in Ramallah in an exceptionally rare sit-down on Sunday that marked the first official meeting between the Palestinian Authority (PA) and Israeli government since 2014.

"I hope that such contacts can result in bringing the parties in a position to advance unresolved issues, including political ones and those related to the implementation of agreements made by the parties," he told the Security Council, as quoted by Anadolu Agency (AA).

Wennesland continued to raise alarm over the PA's "dire financial situation," which he said may "affect all Palestinians."

"It is critical that the PA be empowered to exercise its responsibilities throughout the Occupied Palestinian Territory, including on reconstruction in the Gaza Strip," he said.