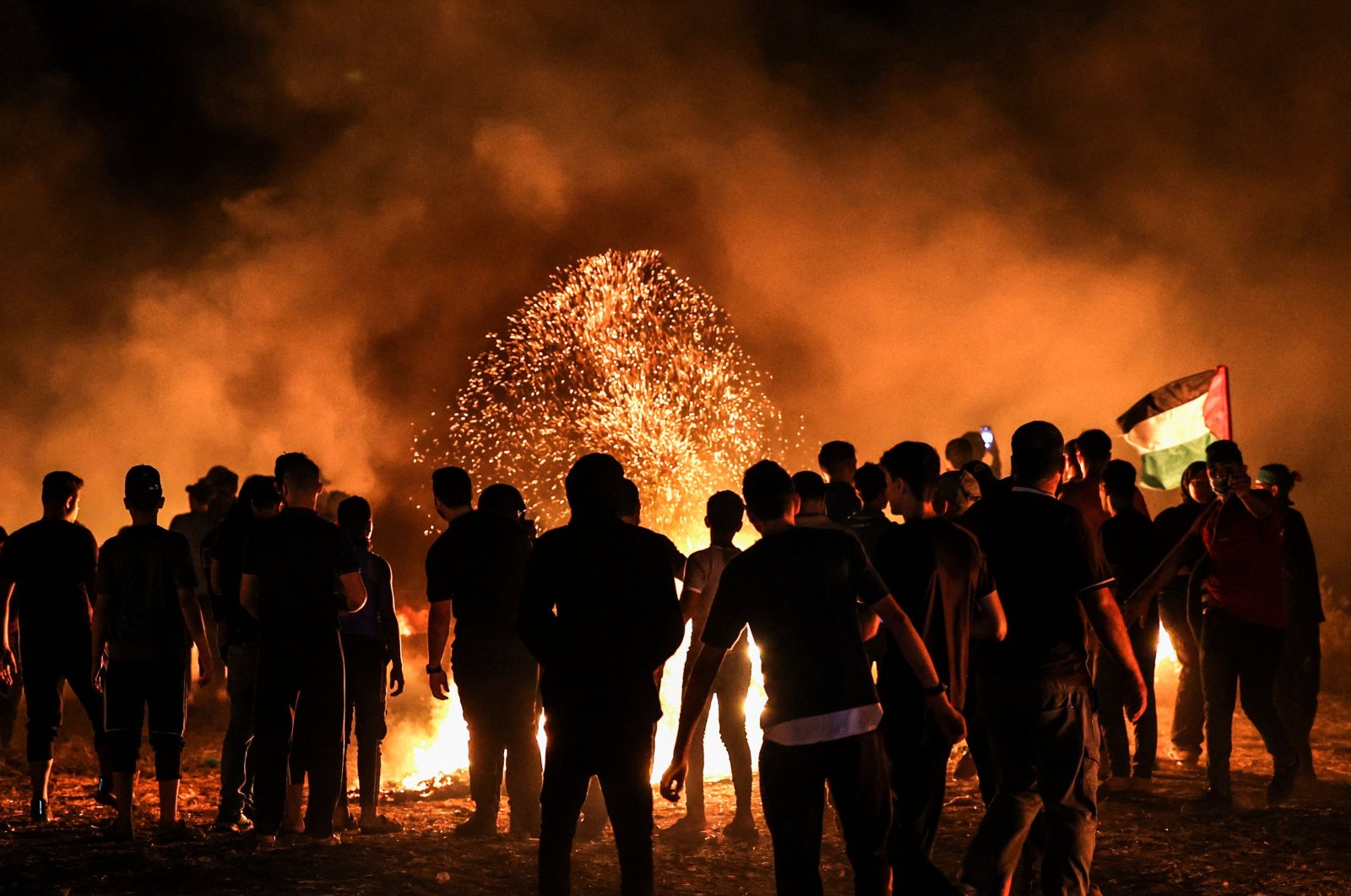 The Israeli air force attacked two sites in the Gaza Strip on Sunday in response to incendiary balloons launched from the besieged Palestinian enclave following a wave of protests against the continued blockade of the enclave.

According to the Israeli army, hundreds of Palestinians gathered on Sunday on the border between Israel and the Gaza Strip during the night. The Palestinians burned tires, to which the Israeli troops responded with “riot dispersal means.”

The latest escalation came as Israel and Egypt continued to relax restrictions on commerce and travel imposed on the Gaza Strip, largely cut off by both countries since Palestinian resistance group Hamas took power in the enclave in 2007.

Israeli "fighter jets struck a Hamas military compound used for manufacturing weapons and training as well as an entrance to a terrorist tunnel adjacent to Jabalia," the Israeli army said. "The strikes were in response to Hamas launching incendiary balloons into Israeli territory and the violent riots that took place yesterday," it said in a statement.

Speaking in Washington, where he had met with U.S. President Joe Biden, Israeli Prime Minister Naftali Bennett said he held Gaza's rulers Hamas responsible for any unrest from the Palestinian enclave.

"As I have already said, our actions in Gaza will serve our interests," he told reporters before boarding a plane back to Israel. "As far as I'm concerned, the address (of those responsible) has been and remains Hamas."

Following airstrikes, Hamas called for piling pressure on Israel to end its yearslong blockade on the Gaza Strip.

"We call on all to assume their responsibility and pressure the (Israeli) occupation to end its unjust blockade," Hamas spokesperson Fawzi Barhoum said in a statement, according to remarks carried by Anadolu Agency (AA). He warned that "peace and stability will not be realized as long as the Palestinian people don’t have a free and dignified life."

The Hamas spokesperson held Israel responsible for the humanitarian crisis in Gaza as a result of the Israeli siege.

"The Palestinian people won't accept the Israeli policies or any compromise of their national rights,” he said.

On Saturday evening, two wildfires broke out in the Eshkol region near the Palestinian enclave, Israeli firefighters said. Protests erupted later in the day, with the Israeli army firing tear gas and stun grenades as Palestinians burned tires on the border between Gaza and Israel, an Agence France-Presse (AFP) reporter said.

The health ministry in Gaza said 11 Palestinians had been hurt in the clashes, three of them by live fire. Hours earlier, Gazans laid to rest Omar Hassan Abu al-Nile, 12, who died of his wounds a week after being shot by Israeli forces during border clashes.

In 2018, Gazans began a protest movement demanding an end to Israel's blockade and the right for Palestinians to return to lands they fled from or were expelled from when the Jewish state was founded in 1948.

The often violent weekly demonstrations sputtered as Israel killed some 350 Palestinians in the territory over the past year. Hamas and Israel fought a devastating 11-day conflict in May, the worst between the two sides in years, which ended with an informal truce.

On Sunday, Egypt reopened the Rafah crossing with the Gaza Strip to allow Palestinians to exit, after having partially reopened on Thursday for travel into Gaza. Rafah, Gaza's only gateway to the outside world not controlled by Israel, was shuttered on Monday by Egypt. Egypt gave no reason for the move, but Palestinian sources in Gaza said it was over the rise in border violence with Israel.

Home to more than 2 million people, the Gaza Strip has been reeling under a crippling Israeli siege since 2007, badly affecting livelihoods in the seaside enclave.