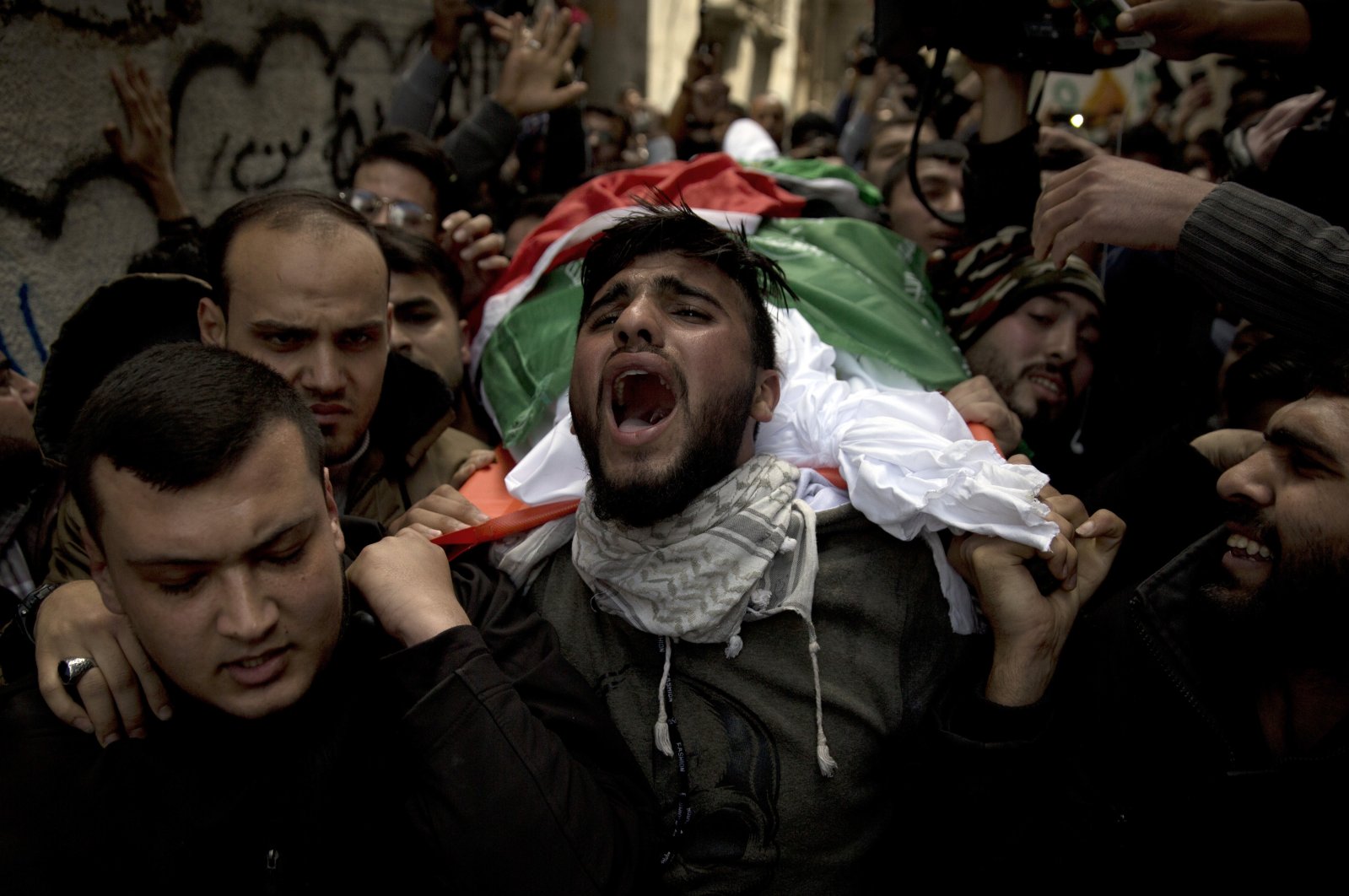 Palestinians carry the body of Tamir Abu al-Khair, 17, who was shot and killed by Israeli troops during a protest next to the Israeli border, eastern Gaza Strip, out of the family home during his funeral in Gaza City, Palestine, March 31, 2019. (AP Photo)
by ASSOCIATED PRESS Dec 02, 2021 9:11 am
RECOMMENDED

Rights groups said Thursday that Israel had failed to investigate shootings that killed more than 200 Palestinians and wounded thousands at violent protests along the Gaza frontier in recent years, strengthening the case for the International Criminal Court (ICC) to intervene.

Beginning in March 2018, Gaza activists organized weekly protests that were initially aimed at highlighting the plight of Palestinian refugees from what is now Israel, who make up three-fourths of Gaza's population of more than 2 million people.

But Hamas soon co-opted the protests and used them to push for the easing of the Israeli-Egyptian blockade imposed on the territory when it seized power from rival Palestinian forces in 2007.

Every week for around 18 months, thousands of Palestinians gathered at different points along the frontier, often after being bused there by Hamas. Groups of protesters burned tires, hurled stones and firebombs, and tried to breach the security fence.

Israeli snipers fired live ammunition, rubber-coated bullets and tear gas from sand berms on the other side in what Israel said was self-defense, to prevent thousands of Palestinians from rushing into Israel.

Israeli fire killed at least 215 Palestinians, most of them unarmed, including 47 people under the age of 18 and two women, according to Gaza's Al-Mezan Center for Human Rights. Hundreds of others were seriously wounded in the demonstrations, which wound down in late 2019. Many were far from the border fence when they were shot. An Israeli soldier was killed by a Palestinian sniper in 2018 and several others were wounded.

A report released Thursday by the Israeli rights group B'Tselem and the Gaza-based Palestinian Center for Human Rights (PCHR) said the military failed to investigate orders issued by senior commanders and took virtually no action against any soldiers.

As of April, out of 143 cases transferred to military prosecutors by an Israeli fact-finding mechanism, 95 were closed with no further action. Only one – the killing of a 14-year-old Palestinian – led to an indictment, with the remainder still pending, the report said. It cited figures obtained from the Israeli military through a freedom of information request.

The indicted soldier was convicted of "abuse of authority to the point of endangering life or health" in a plea bargain and sentenced to one month of community service, the report said.

That's after more than 13,000 Palestinians were wounded over some 18 months of protests, including more than 8,000 hit by live fire. At least 155 required amputation, the report said. It said the military's fact-finding mechanism only reviewed 234 cases in which Palestinians were killed, including some fatalities unrelated to the demonstrations.

The Israeli military issued a statement saying it carried out the investigations in a "thorough and in-depth manner" and filed indictments in two incidents in which soldiers were convicted and sentenced to "imprisonment during military service, probation and demotion."

It said other cases are still pending "due to the complexity of the events and the need for an in-depth examination." It said "dozens of incidents have been handled" since B'Tselem obtained its figures, which the military said were "outdated."

ICC launched an investigation earlier this year into potential war crimes committed by Israel and Palestinian militants in Gaza since 2014, when the two sides fought their third of four wars since Hamas seized power.

Israel has rejected the investigation, saying the court is biased against it and that Israel's justice system is capable of conducting its own investigations that meet international standards. It says its security forces make every effort to avoid civilian casualties and investigate alleged abuses.

Israel is not a party to the ICC, but Israeli officials could be subject to arrest in other countries if it hands down warrants. Israel could potentially fend off the probe by proving it has launched credible investigations of its own.

B'Tselem and the PCHR say Israel has failed to meet those requirements. Its investigations "consist entirely of the military investigating itself and have not examined the unlawful open-fire policy regulations handed down to security forces or the policies implemented during the protests," they said.

"Instead, they focus exclusively on lower-ranking soldiers and on the question of whether they acted contrary to these illegal orders."

Yuval Shany, a senior fellow at the Israel Democracy Institute and a member of the Hebrew University of Jerusalem Faculty of Law, said Israel could be vulnerable to ICC action over its response to the protests, but that the bar is relatively low for a country to prove it has investigated itself.

"It's certainly not about actually prosecuting anyone. It's really about genuinely investigating the incidents," he said. That's for prosecutors to determine, and it's unclear whether Israel will cooperate with the court to try to prove its case.

There's also the question of whether the prosecutors view Israel's response to the protests as a law enforcement action or as an armed conflict with Hamas.

Israel has said Hamas activists were among the protesters, justifying its open-fire regulations in the context of long-running hostilities with the group.

"In the context of an armed conflict, you have greater latitude in applying lethal force toward militants," Shany said. "If this is a law enforcement operation, then you have to basically use more restraint."