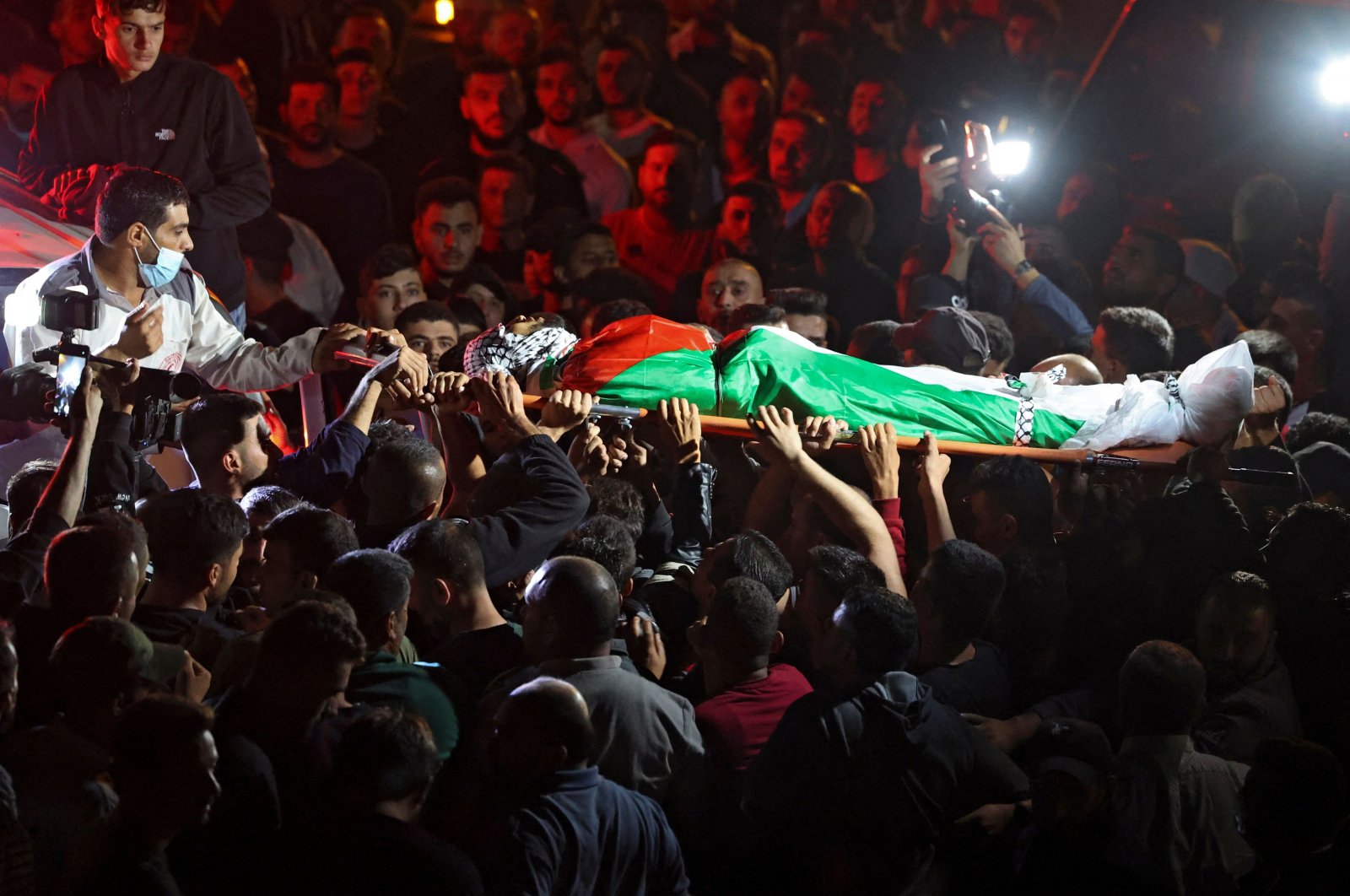 Mourners carry the body of Mohammed Khabisa, a Palestinian who was shot dead by Israeli troops, during his funeral in the village of Beita, the occupied West Bank, Palestine, Sept. 24, 2021. (AFP Photo)
by DAILY SABAH WITH AGENCIES Sep 26, 2021 10:20 am

At least four Palestinians were killed and five others wounded amid clashes that broke out after Israeli forces made arrests in various parts of the occupied West Bank.

According to a report by the Israeli daily Haaretz, gunfire was exchanged in five different locations in the West Bank in the Burqin, Jenin, Qabatiya, Kafr Dan and Kafr Bidu areas. The report also noted that the Israeli forces were making preparations for retaliatory rocket fire from Gaza in protest of the Palestinian deaths.

The shootouts marked the most serious violence between Israel and Hamas since an 11-day Gaza war in May and threatened to raise tensions along the Israeli border with the coastal enclave and in the West Bank.

Palestinian President Mahmoud Abbas, whose Fatah party lost control of Gaza to Hamas in 2007, accused Israel in a statement of "field executions against our people." Hamas called on Palestinians in the West Bank "to escalate resistance against the occupier in all areas" after the raids. A Hamas spokesperson said the four men belonged to the group.

An Israeli military spokesperson said troops carried out five raids in the West Bank "in order to stop" a Hamas cell from operating. It said that three Palestinians were killed in crossfire in the village of Biddu, southeast of Ramallah.

The Palestinian Health Ministry said a Palestinian was shot dead near the northern West Bank city of Jenin and three others, who were identified by their families as Ahmad Zahran, Mahmoud Hmaidan and Zakariya Badwan, were killed in Biddu, north of Jerusalem. The official Palestinian news agency WAFA identified 22-year-old Osama Soboh who was also killed during clashes surrounding an arrest in the northern West Bank village of Burqin, near Jenin. The Palestine Red Crescent ambulance service said four other Palestinians were wounded.

According to Zahran's family, Israeli forces pursued him for several weeks, including during previous army raids on their home and arrests and interrogations of family members, local media reported. Another martyr, Badwan, was reportedly working at the Palestinian Museum in the town of Birzeit near Ramallah. The museum's management said it “received the news with utter shock and immense sadness.”

“We remember our dear Zakariya for his amiable character, friendliness, and his ever smiling and cheerful face,” it said in a social media post, adding that the door of the museum will be closed on Sunday “in mourning of the martyr Zakariya and the martyrs of Palestine who were killed at dawn today.”

Israel recently reopened a crossing with the occupied West Bank for the first time since six prisoners tunneled out of a nearby Israeli prison, a rare escape that triggered a massive search before they were all recaptured.

The Israeli military body that oversees civilian affairs in the West Bank said the Jalameh crossing into the northern West Bank would be open for the first time since Sept. 6, when the prisoners escaped.

Six prisoners tunneled out of Gilboa prison in northern Israel through a shaft in the floor of their bathroom in the biggest jailbreak of its kind in decades. They later split up into groups of two, and the final pair were apprehended over the weekend in the occupied West Bank town of Jenin.

The incident marked an embarrassing security breach for Israel and sparked a massive search in northern Israel and the occupied West Bank. Lawyers for two of the prisoners said they were beaten during their arrest. Palestinians consider prisoners held by Israel to be heroes of their national cause, and many celebrated the escape on social media.

Israeli Prime Minister Naftali Bennett said in a statement that Israeli security forces in the West Bank moved against Hamas operatives "that were about to execute terror attacks in the very immediate future.” He said the soldiers in the field "acted as expected of them” and said his government gave them full support.

Israel captured the West Bank in the 1967 Middle East war and in the decades since has established dozens of settlements where nearly 500,000 settlers reside. The Palestinians seek the West Bank as part of their future state and view the settlements as a major obstacle to resolving the conflict.