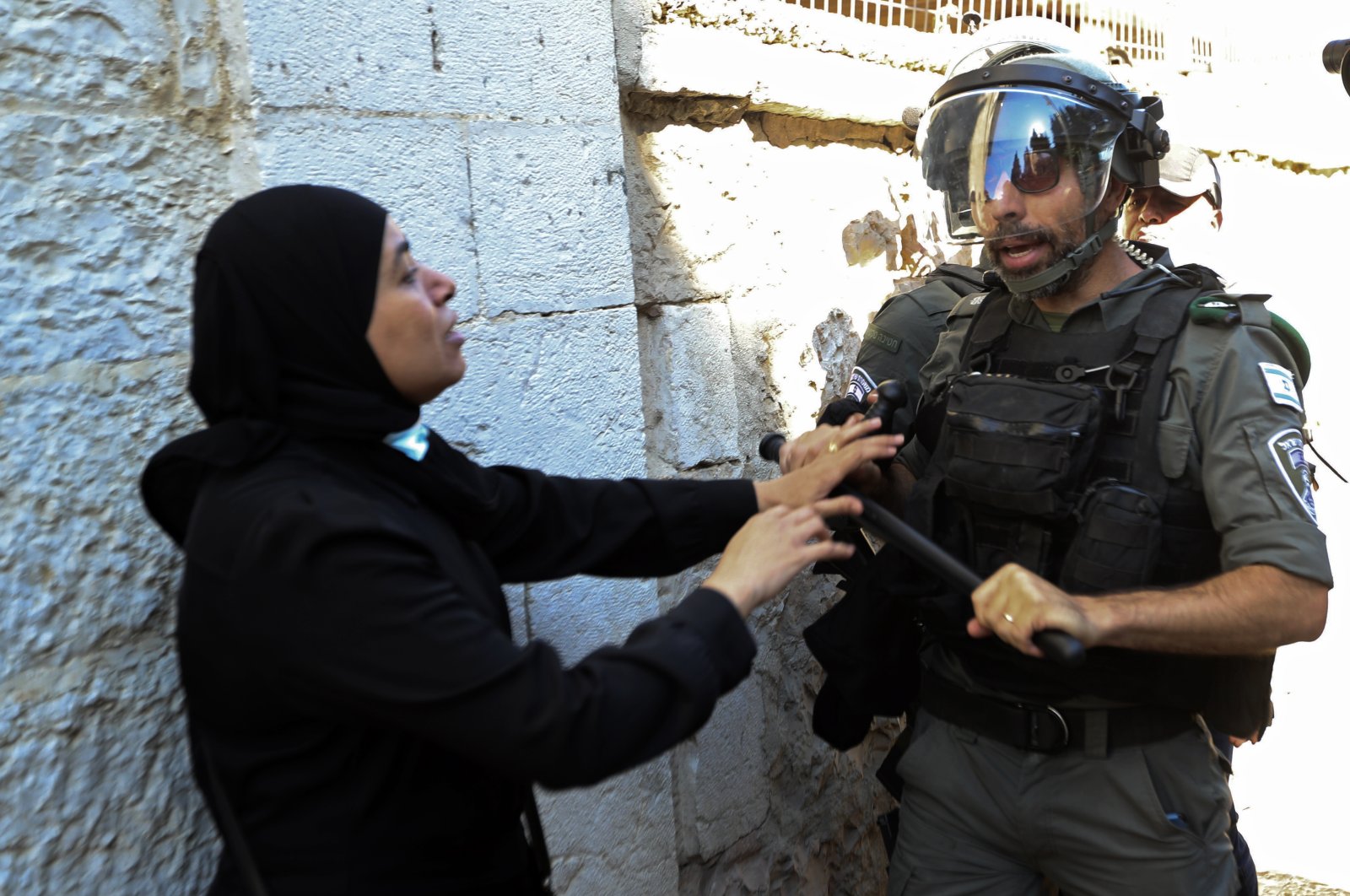 An Israeli police officer and a Palestinian woman scuffle during clashes that erupted ahead of a planned march by Jewish ultranationalists through East Jerusalem, outside Jerusalem's Old City, Tuesday, June 15, 2021. (AP Photo)
by ASSOCIATED PRESS Jun 16, 2021 4:46 pm
RECOMMENDED

The Israeli military says it is curbing its controversial nightly raids of Palestinian homes in the occupied West Bank that were carried out in order to gather information about homes and their inhabitants.

The military has in the past defended the practice, known as "intelligence mapping,” as a necessary measure to counter militant groups. But human rights groups say the policy served only to intimidate civilians. Under the practice, soldiers would rouse families in the middle of the night to document the dimensions and inhabitants of homes in the occupied territory.

Rights groups said the raids, conducted in homes where no one was suspected of illegal activities, served no strategic purpose and caused deep psychological trauma.

The change in policy came half a year after Yesh Din, Physicians for Human Rights Israel, and Breaking the Silence, three Israeli activist groups, published a report on what they described as "arbitrary invasions” of private Palestinian homes.

They said the practice "effectively serves as a means to oppress and intimidate the Palestinian population and increase control over it.” Israel captured the West Bank in the 1967 Mideast war. While the internationally recognized Palestinian Authority (PA) administers autonomous zones within the territory, Israel retains overall control and frequently conducts military raids even in Palestinian-controlled areas.

Today, almost 3 million Palestinians live in the occupied West Bank, according to official Palestinian figures, alongside nearly half a million Israeli settlers.

The Palestinians seek the entire West Bank as the heartland of an independent state, along with the Gaza Strip and East Jerusalem. Israel says the West Bank is disputed territory whose fate should be resolved through negotiations. Most of the international community considers the West Bank occupied territory and Israeli settlements to be illegal and obstacles to peace.

In a letter to Yesh Din on Tuesday, the army said its raids "were not random operations" and were "intended for an operational-intelligence purpose.” It said there were strict guidelines for such operations "in order to minimize the damage and disturbance to the residents’ quality of life.”

Nonetheless, it said the raids would be halted "except in exceptional circumstances.”

"Home invasions are inherent to the apartheid regime in place in the West Bank and we will continue to expose and challenge this and other practices until human rights are respected for all,” he said.

Breaking the Silence Executive Director Avner Gvaryahu said that it was "an important outcome” of the groups' report, "but fundamentally this is not going to bring an end to the occupation or (end) harm to Palestinians.”

The announcement came less than a month after widespread unrest in the occupied West Bank, East Jerusalem and within Israeli cities during May’s 11-day war between the Israeli military and Gaza ruler's Hamas. The conflict erupted after days of Israeli assault of Palestinians in occupied territories as well as forced eviction of families in East Jerusalem's neighborhood Sheikh Jarrah. Israel launched offensive campaign against Gaza Strip, killing more than 250 people, including children and women and wounded nearly 2,000. Thousands of Palestinians left without shelter and hundreds of buildings were destroyed.