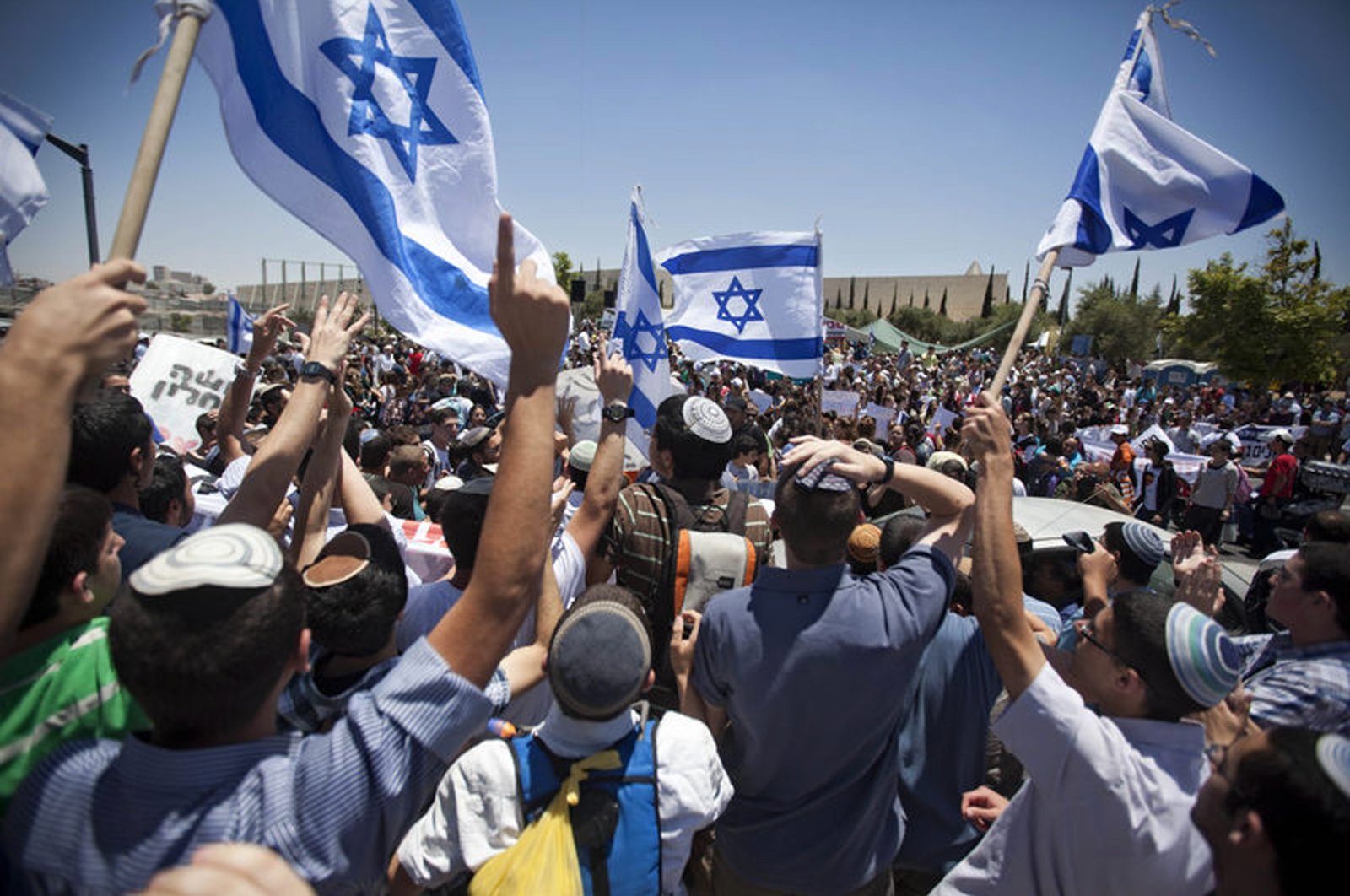 Israeli settlers wave flags during a protest outside the Supreme Court against the proposed decision to evacuate an occupied West Bank outpost in the Ulpana neighborhood, West Jerusalem, Israel, June 6, 2012. (AP Photo)
by DAILY SABAH WITH AA Jul 14, 2021 8:36 am
RECOMMENDED

Former Israeli soldiers who were stationed in the occupied West Bank have demanded that Israel’s defense and internal security ministers put a stop to settlers' violence against Palestinians.

According to a report on Israeli Army Radio, around 100 former Israeli soldiers, who have just completed their military service, sent a letter to Defense Minister Benny Gantz and Internal Security Minister Omer Bar-Lev about their experiences in the occupied West Bank.

Calling for action "against the phenomenon of settler violence,” the former soldiers said the responsibility for countering the violence of Israeli settlers rests with Gantz and Bar-Lev.

The violence perpetrated by the settlers against Palestinians has increased with the implicit support of the Israeli state for years, the letter said. "We are the ones serving there and we have personally seen how that violence happened on the field," wrote the former soldiers.

The phenomenon of settler violence intensified over the past year, evident as "damaging private property, stone throwing, physical violence against Palestinians and attacks on activists and (Israeli) security forces” the letter added.

"We were sent to defend them (Israeli settlers), but we had no means to withstand them," it said.

According to data from the Israeli Defense Ministry, a total of 370 incidents of violence perpetrated by Israeli settlers in the occupied West Bank were reported in 2020, 42 of them against Israeli police and soldiers.

Israeli and Palestinian estimates indicate that there are about 650,000 settlers in the occupied West Bank, including occupied Jerusalem, living in 164 settlements and 116 outposts. Under international law, all Israeli settlements in the occupied territories are considered illegal.

Facing mounting pressure from the international community, which opposes the illegal occupation of Palestinian territories, Israel said the evictions are a private real estate dispute and accused Hamas of using the issue to incite violence.

The settler movement enjoys strong support from the Israeli government and the right-wing parties that dominate Israeli politics. The settlers have benefitted from Israeli policies going back to 1967 that have encouraged the expansion of settlements in the occupied West Bank and East Jerusalem while severely restricting the growth of Palestinian communities.

Even with the arrival of a new government headed by Prime Minister Naftali Bennet, Israel has maintained its offensive campaign against Palestinians. Media reports frequently cite incidents across East Jerusalem and the occupied territories. Israel arrested thousands of Palestinians under its policy of administrative detention, which allows Israeli authorities to extend the detention of a prisoner without charge or trial.

According to institutions dealing with prisoners’ affairs, around 5,300 Palestinian detainees are being held in Israeli prisons, including 520 administrative detainees.