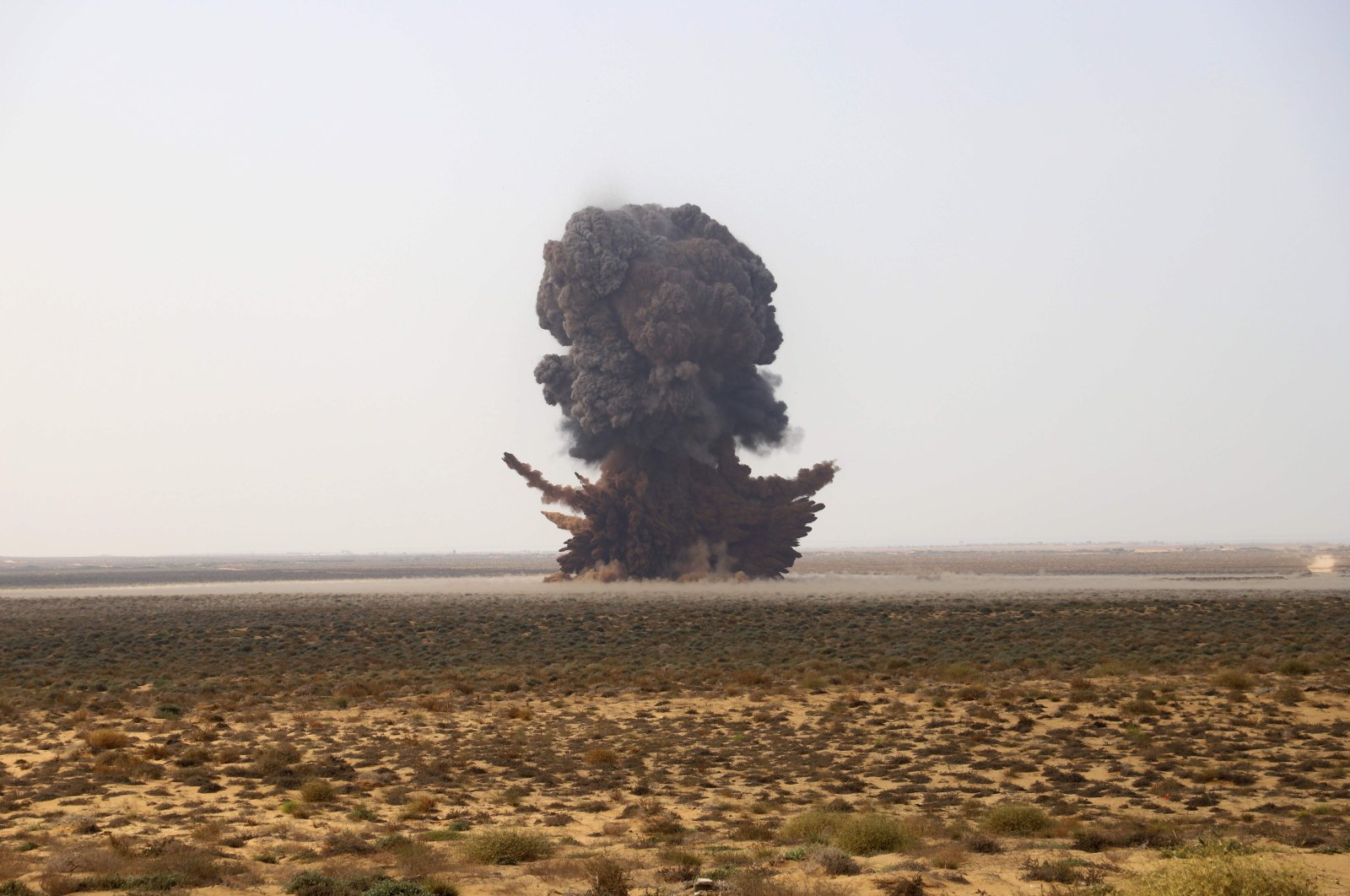 A joint Saudi-backed Sudanese-Yemeni military experts force removes and deactivates some 5,000 landmines which they said were planted by the Iran-aligned Houthi rebels in Yemen's northern coastal town of Midi, located in conflict-ridden Hajjah governorate near the border with Saudi Arabia on the Red Sea on Jan. 30, 2021. (AFP Photo)
by Agencies
Jan 30, 2021 9:26 pm

Italy has joined a growing number of countries blocking arms exports to Saudi Arabia and the United Arab Emirates (UAE) over their involvement in the Yemen war with the recent move making an 18-month temporary suspension permanent.

"Today I am announcing that the government has revoked the authorizations underway for the export of missiles and aircraft bombs to Saudi Arabia and the United Arab Emirates," Foreign Minister Luigi Di Maio said in a statement Friday.

"(This is) an act that we considered due, a clear message of peace coming from our country. For us, respect for human rights is an unbreakable commitment," he said.

Humanitarian groups hailed the decision as "historic," as it will determine a complete blockade on weapons sales to the Gulf countries.

The Italian Peace and Disarmament Network, a coalition of organizations campaigning against Italy's weapons sales, said the move would stop the supply of at least 12,700 bombs, according to remarks carried by the Anadolu Agency (AA).

In 2018, Italian Prime Minister Giuseppe Conte had pledged his government wanted to end arms sales to Saudi Arabia because of its involvement in Yemen and the murder of journalist Jamal Khashoggi.

"We are very satisfied,” said Democratic Party's lawmaker Lia Quartapelle, commenting on the move. "The network against the use of weapons and Catholic associations have turned the spotlight on violations of human rights in Yemen for a while.”

Earlier this week, U.S. President Joe Biden also issued a temporary pause to arms sales to Saudi Arabia and the UAE as his administration reviewed the exports. The move came as the Biden administration also designated Houthis a terrorist group despite calls against it over its possible humanitarian consequences.

"This common vision helps us improve a new dialogue with the U.S. to manage the relationships in the Mediterranean in a more balanced way,” Quartapelle said.

The United Nations describes Yemen's war – a conflict seen as a proxy war between Riyadh and Tehran – as the world's largest humanitarian crisis, with 80% of its people in need of aid due to chaos since 2015.

In 2019, several European Union countries froze arms sales to Saudi Arabia, which heads a military coalition fighting Iran-backed Shiite Houthi rebels in Yemen in a conflict that has killed tens of thousands of people.

The Italian decision came just as former Prime Minister Matteo Renzi, who plunged Italy's government into a political crisis recently by pulling his Italia Viva Party from the ruling coalition led by Giuseppe Conte, flew to Saudi Arabia to speak at an investment forum.

In Riyadh, he spoke at the Future Investment Initiative (FII) – dubbed "Davos in the desert" – in an apparently pre-recorded video with Mohammed bin Salman (MBS), the crown prince of Saudi Arabia.

Video footage published online showed Renzi praising the "great" prince, also known as MBS, saying: "Saudi could be a place for a new Renaissance for the future."

The visit sparked controversy in Italy, as the blocked sales were part of the total export of 20,000 missiles worth more than 400 million euros agreed in 2016 by the center-left government led by Renzi, a longstanding foe of Di Maio.

Italian newspaper Domani, which broke the story on Renzi's Saudi engagement, said he receives $80,000 a year for being on the advisory board of the FII.

"Senator Renzi does nothing different from what other international leaders do," a lawmaker from his party, Ettore Rosato, told reporters.

"(He) went to make a cultural contribution," he added.