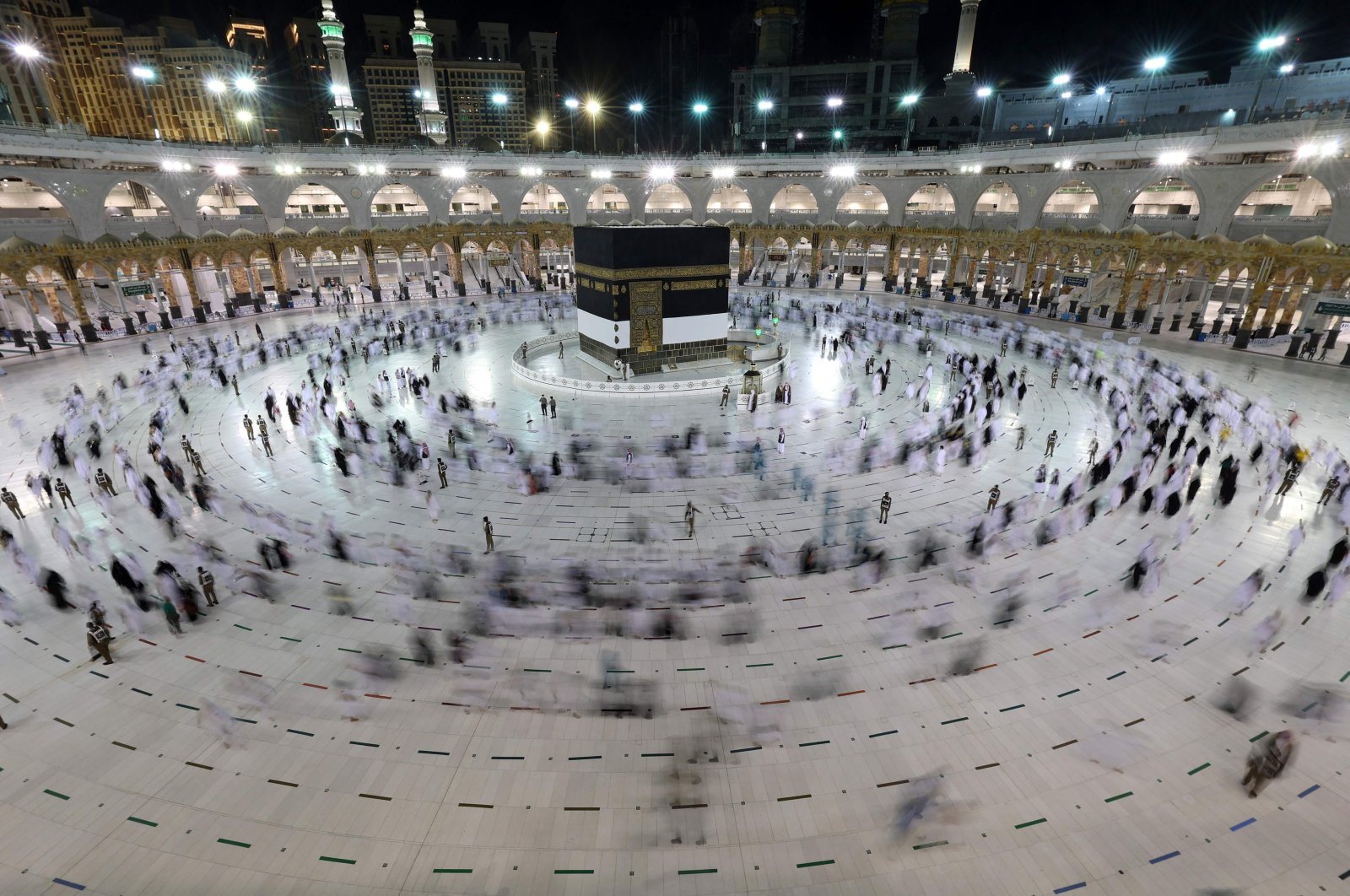 Hajj pilgrims streamed out of the holy city of Mecca Sunday, launching the rituals of the great pilgrimage that Saudi Arabia is holding in a scaled-down form for a second year to ward off the coronavirus pandemic.

Saudi Arabia is allowing only 60,000 fully vaccinated citizens and residents of the kingdom to take part, far from the vast crowds that descend on Mecca in normal times, when the ritual draws some 2.5 million pilgrims.

Since Saturday, groups of pilgrims have been performing the "tawaf" at Mecca's Grand Mosque, circling the Kaaba, a large cubic structure draped in golden-embroidered black cloth toward which Muslims around the world pray. After that, pilgrims have been making their way to the Valley of Mina, where they will spend the night.

"46,000 pilgrims have arrived in Mina," Deputy Minister of Hajj and Umrah Abdelfattah bin Suleiman Mashat told Agence France-Presse (AFP) Sunday morning. "The number of women participating in the hajj this year exceeds 40%," he added. Mina sits in a narrow valley surrounded by rocky mountains and is transformed each year into a vast encampment for pilgrims.

"Public health teams are monitoring the health status of pilgrims around the clock upon their arrival in Mecca," said Sari Asiri, director of the hajj and umrah department at the health ministry. Anyone found to be infected would be taken to isolation facilities, he added.

On the high point of the hajj, worshippers will Monday climb Mount Arafat. Also known as the "Mount of Mercy," it is the site where it is believed that the Prophet Muhammed delivered his final sermon. Worshippers will undertake hours of prayers and recitals from the Quran. After descending the following day, they will gather pebbles and perform the symbolic "stoning of the devil."

The hajj, usually one of the world's largest annual religious gatherings, is one of the five pillars of Islam and must be undertaken by all Muslims with the means at least once in their lives.

This year's pilgrimage is larger than the pared-down version staged in 2020 but drastically smaller than in normal times, creating resentment among Muslims abroad who are barred once again.

Participants were chosen from more than 558,000 applicants through an online vetting system, with the event confined to fully vaccinated adults aged 18-65 with no chronic illnesses, according to the hajj ministry. "I thank God that we received approval to come, even though we did not expect it because of the small number of pilgrims," said Abdulaziz bin Mahmoud, an 18-year-old Saudi.

Saddaf Ghafour, a 40-year-old Pakistani woman traveling with her friend, was among the increasing number of women making the pilgrimage without a male guardian, which was a requirement until recently. "It is a privilege to perform hajj among a very limited number of pilgrims," she said.

Saudi Arabia has so far recorded more than 507,000 COVID-19 infections, including over 8,000 deaths. Some 20 million vaccine doses have been administered in the country of over 34 million people.

The hajj, which typically packs large crowds into congested religious sites, is potentially a super-spreader event for the virus. But the hajj ministry has said it is working on the "highest levels of health precautions" in light of the pandemic and the emergence of new variants. Pilgrims are being divided into groups of just 20 "to restrict any exposure to only those 20, limiting the spread of infection," ministry undersecretary Mohammad al-Bijawi said.

Aside from strict social distancing measures, authorities have introduced a "smart hajj card" to allow contact-free access to camps, hotels and the buses that ferry pilgrims around religious sites.

The hajj went ahead last year on the smallest scale in modern history. Authorities initially said only 1,000 pilgrims would be allowed, although local media said up to 10,000 eventually took part. No infections were reported as authorities set up multiple health facilities, mobile clinics and ambulances to cater for the pilgrims, who were taken to the religious sites in small batches.