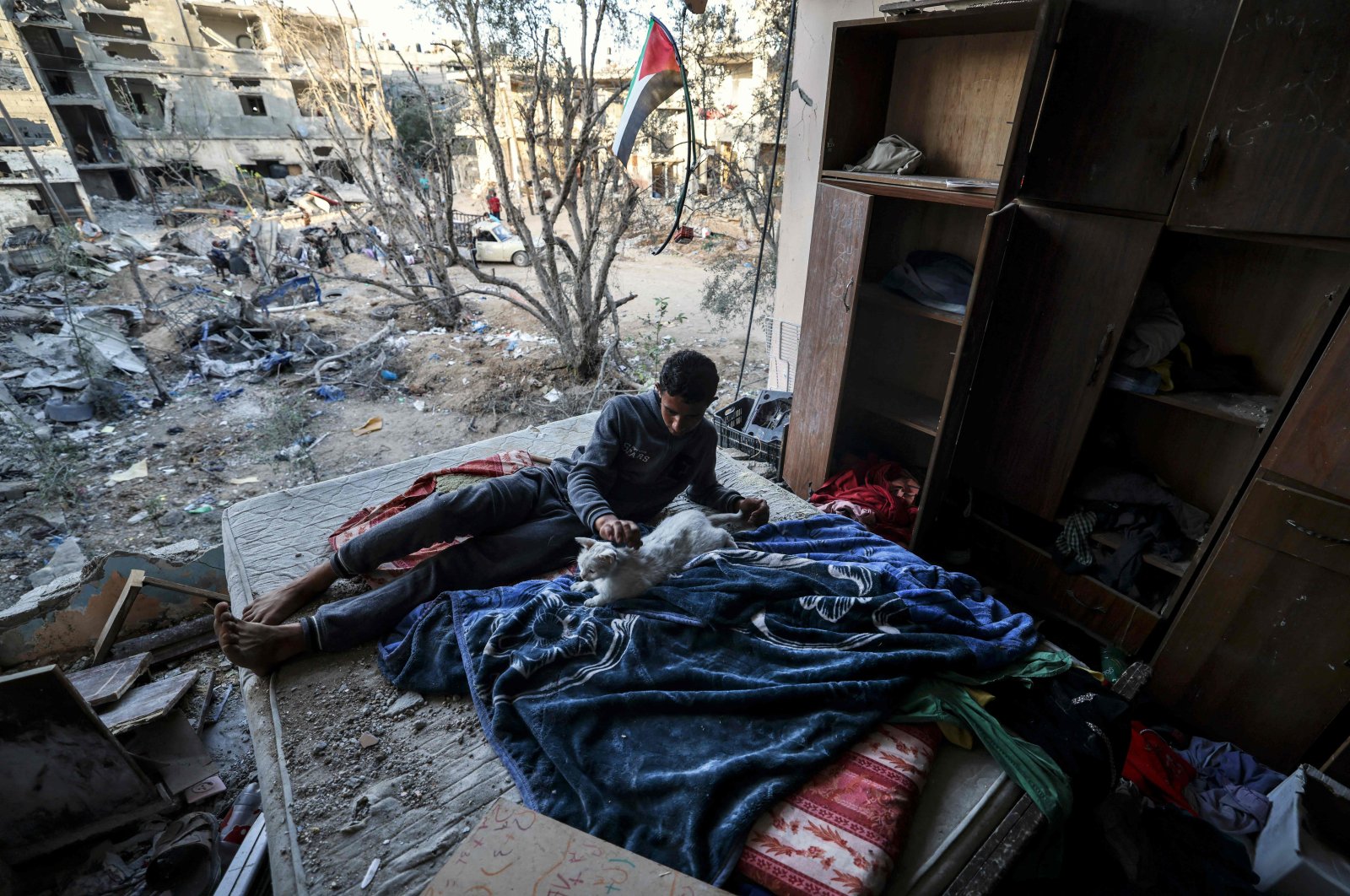 A young Palestinian pets a cat in a building heavily damaged during recent Israeli strikes more than a week after a cease-fire brought an end to 11 days of hostilities between Israel and Gaza rulers Hamas, Beit Hanun, northern Gaza Strip, June 1, 2021. (AFP Photo)
by DAILY SABAH WITH AGENCIES Jun 03, 2021 11:00 am
RECOMMENDED

Left without shelter and supplies due to a blockade and the 11 days of the Israeli offensive, Palestinians are facing "staggering health needs" in the occupied territories, the World Health Organization (WHO) warned Wednesday.

"WHO is scaling up its response to provide health aid for almost 200,000 people in need across the occupied Palestinian Territories (OPT)," which includes the West Bank, WHO's Eastern Mediterranean regional office said in a statement.

"The situation is volatile. WHO remains concerned ... and calls for unhindered access for humanitarian and development-related essential supplies and staff into Gaza and referral of patients out of Gaza whenever needed," warned the WHO's Rik Peeperkorn.

United Nations and Red Cross officials visited the besieged Gaza Strip to see the devastation wrought by Israel's bombardment, including damage to homes, educational centers, hospitals and other critical infrastructure.

"Over 77,000 people were internally displaced and around 30 health facilities have been damaged" in the hostilities, the WHO statement said, adding that the conflict triggered further displacements and exacerbated a protracted humanitarian crisis.

The offensive campaign in the Gaza Strip started in early May when Israeli forces assaulted Palestinian worshippers in Al-Aqsa Mosque during the holy month of Ramadan. It also forced the expulsion of Palestinian families from their homes in East Jerusalem's Sheikh Jarrah neighborhood. Days after clashes with Palestinians across occupied territories Israel launched airstrikes on Gaza, killing more than 250 people, including 69 children and wounded over 2,000 others.

The International Committee of the Red Cross’ (ICRC) head urged Israelis and Palestinians Wednesday to find a political solution, saying that it is "really heart-breaking to see and to hear about the people who paid the ultimate cost of this escalation."

"Women, children, civilians who were living safely in their apartments and were caught in this rubble that we see behind us,” Robert Mardini told Reuters after his first visit to Gaza in four years. “I hope this is the last time I am coming to witness yet again the results and the humanitarian impact of yet again another cycle of violence and escalation.”

He asserted that political leadership is needed on all sides to avoid that "people yet again are in the line of fire because of yet again another round of escalation."

“Political leadership to find a sustainable solution that is more sustainable than what we have been witnessing over the past decade and more,” he said. When asked if he would discuss the prospects for a new prisoner swap deal in the region, Mardini said the ICRC is ready to help the parties if the deal is concluded.

“We have repeatedly offered our services as a neutral intermediary, so we will be renewing this offer yet again,” he said.

Israel has enforced a land and sea blockade on Gaza since Palestinian resistance group Hamas seized control in 2007 of the impoverished and densely populated territory that is home to about 2 million Palestinians. Egypt's heavily secured Rafah crossing is Gaza's only passage to the outside world not controlled by Israel.

"Palestinians' lives are deteriorating; many of the people affected by the conflict are in urgent need of aid and face other health threats like COVID-19," WHO's Peeperkorn said.

The global health body said that as of May 31, "337,191 confirmed cases of COVID-19 and 3,765 deaths have been reported in OPT, with positive cases increasing in Gaza in recent weeks." It said that last month it launched an appeal for $7 million to help shore up its health operations in the Palestinian territories, but had only received $2.3 million.

Israel's recent attacks on Gaza destroyed 1,800 homes and partially destroyed at least 14,300 more, forcing tens of thousands of Palestinians to take refuge in U.N.-administered schools. The blasts also damaged 74 public buildings, including local municipalities, according to figures released by the Gaza Ministry of Information.