New Israeli coalition hurries to get rid of PM Netanyahu 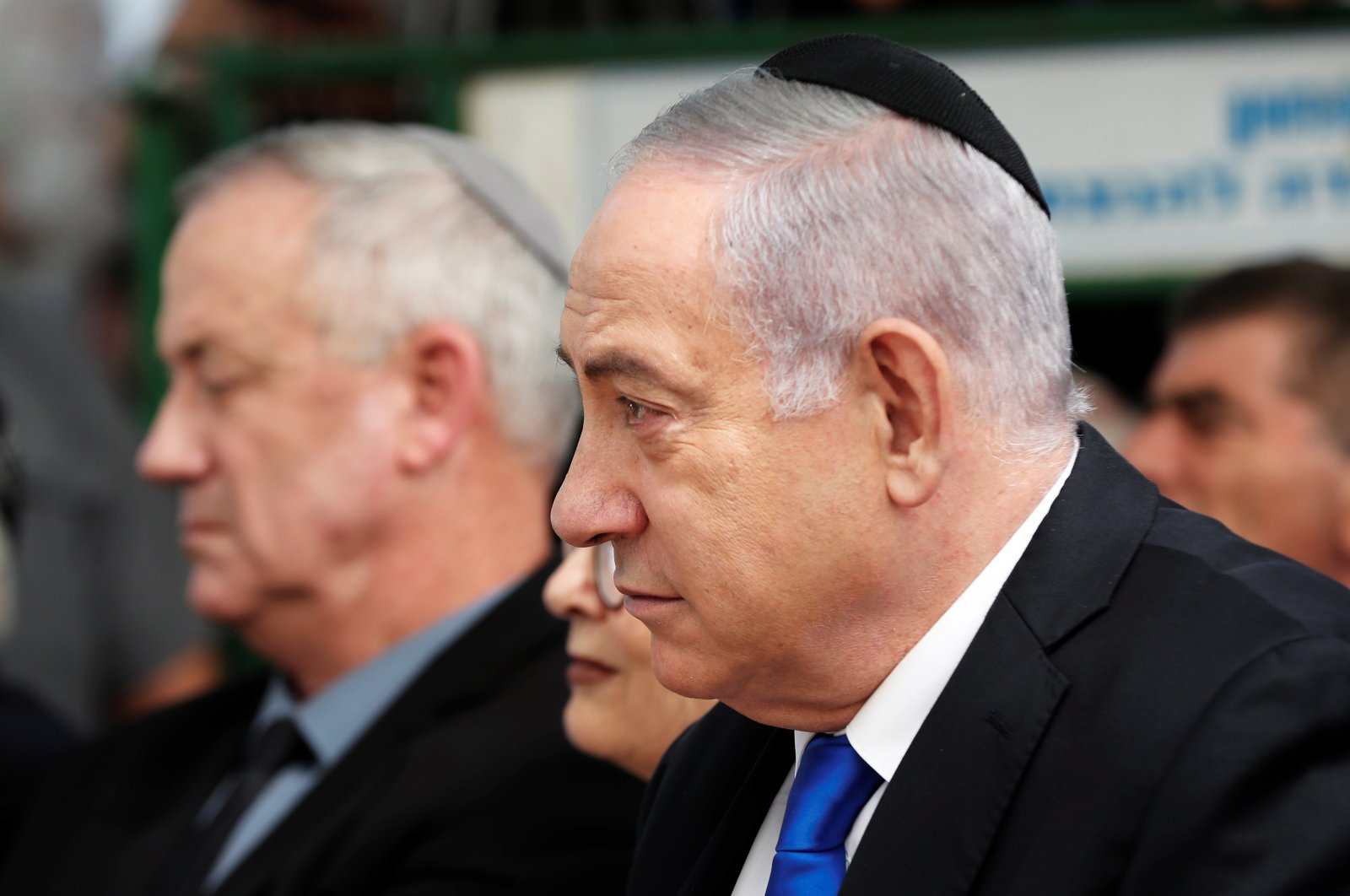 Israeli Prime Minister Benjamin Netanyahu looks on as he sits next to Benny Gantz, leader of Blue and White party, during a memorial ceremony for late Israeli President Shimon Peres, at Mount Herzl in Jerusalem, Israel, Sep. 19, 2019. (Reuters Photo)
by DAILY SABAH WITH AGENCIES Jun 03, 2021 12:55 pm

Opponents of Israeli Prime Minister Benjamin Netanyahu have pushed for a quick vote to end his record 12-year rule, seeking to thwart what is expected to be a frantic onslaught by the prime minister and his allies to undermine the newly announced coalition

Israel's future coalition government on Thursday pushed for a quick vote to end Prime Minister Benjamin Netanyahu's record-setting rule, seeking to be sworn in by parliament as early as Monday.

The new phase of political warfare began just hours after opposition leader Yair Lapid and his main coalition partner, Naftali Bennett – an ideological odd couple – declared they had reached a deal to link a majority of the Knesset and form a new government.

Netanyahu, facing the prospect of an end to his 12-year run as premier, said on Twitter "all legislators elected by votes from the right must oppose this dangerous left-wing government."

It was the first public pushback by Netanyahu, who heads the right-wing Likud party. Lapid's announcement came about 35 minutes before a Wednesday night deadline that he had succeeded in forming a governing coalition.

The announcement triggered a complex process likely to stretch over the next week, giving Netanyahu time to try to pressure coalition members ideologically aligned with him to quit the group. Now the question was whether the coalition of 61 votes would hold together through a vote of the 120-member Knesset – and who would preside over that vote.

Netanyahu supporters have demonstrated and launched vicious social media campaigns, repeating the message Netanyahu has been sending over the past week as the new coalition coalesced. One factor is in Netanyahu’s favor: The parliament speaker is an ally who could use his position to delay the vote and give Netanyahu more time to sabotage the coalition. Factions around the leader of Future Party, Lapid, meanwhile are trying to replace parliamentary speaker Yariv Levin, according to Deutsche Presse-Agentur (DPA).

The prime minister and his allies called a meeting later in the day to plan their next steps, and it was unclear whether his opponents could name a new parliament speaker to preside over a Knesset vote required to confirm the new government. If it goes through, Lapid and a diverse array of partners that span the Israeli political spectrum will end Netanyahu’s record-setting but divisive 12-year rule.

On Wednesday evening, the former opposition leader Lapid informed President Reuven Rivlin that he formed a coalition with eight parties from all political camps.

"I am honored to inform you that I have succeeded in forming a government," Lapid told Rivlin in an email.

Under the agreement, Lapid and Bennett will split the job of prime minister in a rotation. Bennett, a former ally of Netanyahu, is to serve the first two years, while Lapid is to serve the final two years – though it is far from certain their fragile coalition will last that long. Initially, it was said that the necessary vote and swearing-in ceremony in parliament would probably take place on June 14.

A source involved in the coalition talks said the proposed new government would try to retain consensus by avoiding hot-button ideological issues such as whether to annex or cede the occupied West Bank territory that Palestinians want for a state. Bennett has said that the creation of an independent Palestine would be suicide for Israel. He made annexation of parts of the territory that Israel captured in the 1967 Middle East war a major feature of his political platform but following through on that with the broad new coalition looked to be politically unfeasible.

During his tenure as prime minister, Netanyahu has been an often polarizing figure at home and abroad. He has said a Bennett-Lapid coalition would endanger Israel's security – an allusion to efforts to curb Iran's nuclear program and managing the Palestinian issue.

Political analysts have widely expected Netanyahu to try to pick off what one described as "low-hanging fruit," seizing upon Yamina members who are unhappy about joining forces with Arab and leftist lawmakers.

Tamar Zandberg, a Meretz legislator, acknowledged the difficulties in getting the alliance that her party joined off the ground, according to Reuters.

"The coalition's test ... is to be sworn in – that won't be without rough patches and problems," she said on Army Radio on Thursday.

Netanyahu controls 30 seats in the 120-member Knesset, almost twice as many as Lapid's Yesh Atid party, and he is allied with at least three other religious and nationalist parties.

Netanyahu, desperate to remain in office while he fights corruption charges, is expected to do everything possible in the coming days to prevent the new coalition from taking power. If he fails, he will be pushed into the opposition. The agreement capped a March 23 election in which neither Likud nor its allies nor their opponents won a majority in the legislature. It was Israel's fourth national ballot in two years.

The deal comes at a tumultuous time for Israel, which launched an 11-day airstrike campaign against Palestinian resistance group Hamas in the Gaza Strip last month. The offensive campaign in the Gaza Strip started in early May when Israeli forces assaulted Palestinian worshippers in Al-Aqsa Mosque during the holy month of Ramadan. It also forced the expulsion of Palestinian families from their homes in East Jerusalem's Sheikh Jarrah neighborhood. Days after clashes with Palestinians across occupied territories Israel launched airstrikes on Gaza, killing more than 250 people, including 69 children and wounded over 2,000 others. The country is also emerging from a coronavirus crisis that caused deep economic damage and exposed tensions between the secular majority and the ultra-Orthodox minority.