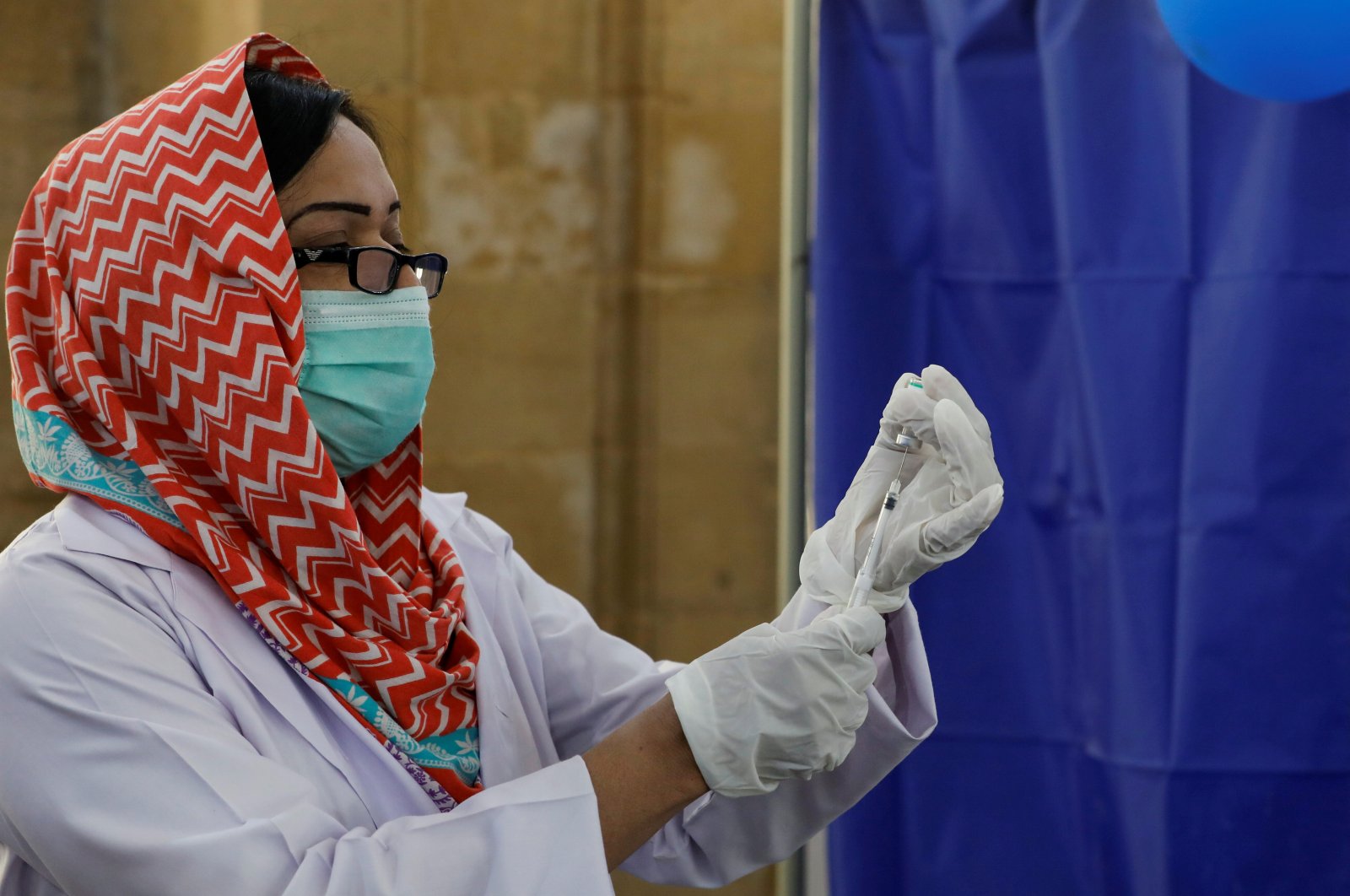 A paramedic prepares a dose of Sinopharm's coronavirus disease (COVID-19) vaccine before administering it to a health worker at a vaccination center in Karachi, Pakistan, Feb. 11, 2021. (REUTERS/Akhtar Soomro)
by REUTERS Feb 12, 2021 12:16 am
RECOMMENDED

Pakistan's stalled coronavirus vaccine drive will get a boost from private enterprise after Islamabad altered its drug guidelines to both allow the inoculations to be imported and exempt them from price caps, Reuters revealed.

The documents the news agency reviewed show the National Health Services, Regulations and Coordination division of the health ministry had sought a special cabinet exemption to allow for such imports while excluding the imported vaccines from the strict price cap regime that is typically applied to all drug sales within the country.

The documents show the cabinet of Prime Minister Imran Khan has approved the proposal, which also sought suspension of some related regulations for six months to let the private sector determine the maximum price caps.

Health Minister Faisal Sultan confirmed the cabinet decision to Reuters, saying it was an "approval of the principle that private sector can import" and drive the pricing due to "the non-availability of a reference price."

The Drug Regulatory Authority of Pakistan didn't respond to a request for comment.

The decision is significant as Pakistan, a nation of 220 million, has yet to secure substantive volumes of vaccines from any company and only this month launched a vaccination drive with 500,000 doses of Sinopharm's vaccine donated by long-time ally China.

Frontline health workers are being given the shots on priority.

Sultan said that Pakistan still planned to inoculate its population for free and only a "small minority" who wished to pay for the shots would have that option in the open market.

"Only those who wish to get it via private sector will pay anything," he said. "Personally, my assessment is that when the vaccines are available and we have market competition, that will automatically set the prices."

Pakistan, which has recorded more than 550,000 cases but limited its COVID-19 deaths to just over 12,000 deaths through its targeted-lockdown strategy, is still largely reliant on the GAVI/WHO COVAX vaccine initiative that is aiming to provide 337 million shots to poorer nations.

Pakistan has yet to receive any of the 17 million doses it is expected to get through the COVAX initiative allotment.

Sultan said last month the country could receive "in the range of tens of millions" of a CanSino Biologics vaccine under an agreement with the Chinese firm.

But there remains no clarity on a timeline.

Experts have questioned the decision to allow commercial imports and no price caps.

The doctor leading the CanSinoBIO trial at Islamabad’s Shifa Hospital, Ejaz A. Khan, called on authorities to review the move as the government's procurement for public use seemed inadequate.

"Not setting a price limit for the private sector opens up the market for misuse," he told Reuters.

The government's decision revolves around a rationale of not being able to find any reference price.

"No information was available; about import prices of vaccines from different sources," says the document, adding: "In view of the above factual position, it might not be possible to fix a maximum retail price."

"We will continue monitoring the prices and obviously we will see their procurement price to see if there is any over-pricing, and the government always retains the right to intervene if there is any predatory practice."

Nasim Salahuddin, the head of the department of infectious diseases at Karachi's Indus Hospital, questioned the need to involve the private sector at this stage, pointing out that there had been a slow uptake in administering already available vaccines since the drive started on Feb 3.

According to government records, only 27,228 health care workers have so far been vaccinated.

Sinopharm, AstraZeneca and Sputnik V are the only three candidates to be approved for emergency use in Pakistan.