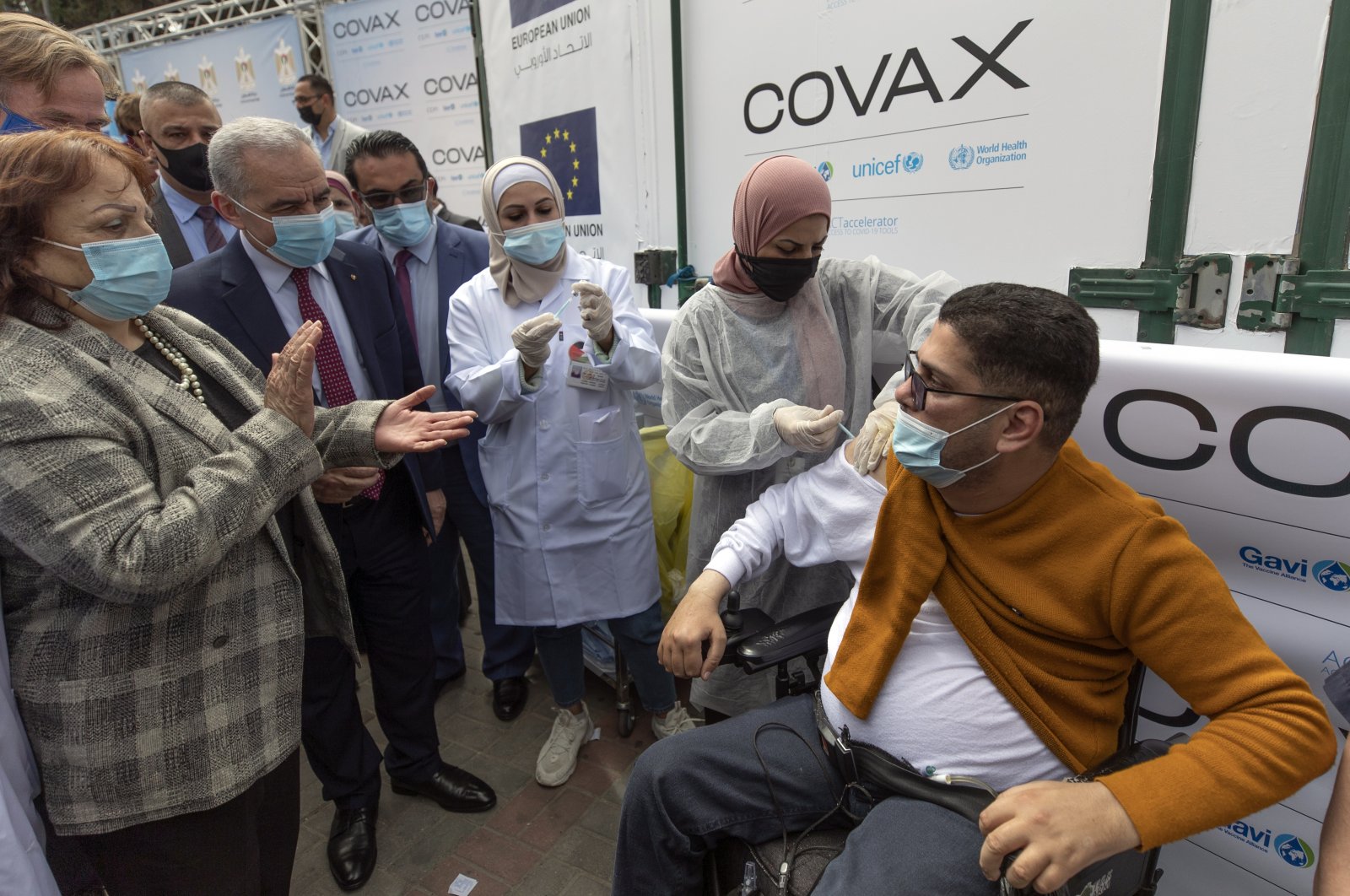 Health Minister Mai Alkaila (L) and Palestinian Prime Minister Mohammad Ishtayeh (2nd L) watch as a man receives a shot of the Pfizer COVID-19 vaccine during a campaign to vaccinate frontline workers, those over 75, cancer patients and medical personnel, at the health ministry in the West Bank city of Ramallah, March 21, 2021. (AP Photo)
by ASSOCIATED PRESS Mar 21, 2021 5:17 pm
RECOMMENDED

The Palestinian Ministry of Health began administering the first doses of coronavirus vaccine as part of the global COVAX initiative to health workers and the elderly in the occupied West Bank and Gaza Strip on Sunday.

The World Health Organization (WHO) and its partners running the United Nations COVAX program delivered 61,400 vaccines to the Palestinian Authority (PA) on Wednesday, whereas 21,300 were shipped to the blockaded, Hamas-controlled Gaza Strip.

The vaccine shipment is a boost to the West Bank, where the PA has struggled to obtain vaccines as the infection rate surged in recent weeks. Until now it had only secured 10,000 doses of Russia’s Sputnik V vaccine and 2,000 shots from Israel for the roughly 3 million Palestinians living in the West Bank. By contrast, Gaza, which has been under Israeli-Egyptian blockade since Hamas took control of the area in 2007, has received more than 80,000 vaccines.

Most of them were of the Russian variety and have come from a rival of President Mahmoud Abbas based in the United Arab Emirates (UAE).

Mohammed Dahlan, who has been living in Abu Dhabi since falling out with Abbas in 2011, has secured the delivery of 60,000 shots to Gaza and promised more, embarrassing Abbas ahead of Palestinian elections planned in May.

In the West Bank, Palestinian Prime Minister Mohammad Shtayyeh said the vaccines would go to medical workers and older people.

"We are here to start the preventive vaccination drive for our people against the coronavirus,” he said.

Even with the arrival of the vaccines, the Palestinian areas lag far behind Israel, which has vaccinated some 80% of its adult population.

The disparity has drawn attention to the inequities in the global distribution of vaccines between rich and poor countries. U.N. officials and human rights groups have said Israel is an occupying power with a responsibility for vaccinating the Palestinian population.

Israel says that under interim peace accords, it has no such responsibility. But in recent weeks, it has inoculated over 100,000 Palestinian laborers in the West Bank who have permits to work inside Israel and its West Bank settlements.

The Pfizer-BioNTech and AstraZeneca vaccines are the first distributed by COVAX in the Palestinian territories. At a Gaza City clinic, five WHO workers and five local medical workers were the first to be inoculated with COVAX-donated doses.

"We are very proud to be here today with our esteemed colleagues” to promote the first arrival of vaccines through COVAX, said Sacha Bootsma, head of WHO’s Gaza office, who received the first shot of vaccine at the event.

But major countries, including France, Italy and Germany, have begun using the vaccine again, and Palestinian authorities have approved its use. Bootsma noted that both vaccines "have been validated by WHO globally through very lengthy and stringent process.”

Dr. Majdi Dhair, a health ministry official, said only 11,200 of Gaza's 2 million residents have been inoculated so far, saying the turnout "started to grow” a month after the rollout of vaccines. Bootsma said the limited number of vaccines in Gaza prevents a mass vaccination campaign.

The Gaza Strip has seen at least 58,000 confirmed cases of COVID-19 since August and 582 deaths. The West Bank has reported nearly 163,000 COVID-19 cases and 1,824 deaths. In recent weeks, Hamas authorities governing the territory have eased almost all coronavirus restrictions, despite warnings from health officials. Bootsma criticized the move.

"The COVID-19 pandemic is not over yet. We are all still at risk of becoming infected, especially now that the government has eased all the restrictions," she said.