Thousands of Palestinians rally to celebrate cease-fire in Gaza 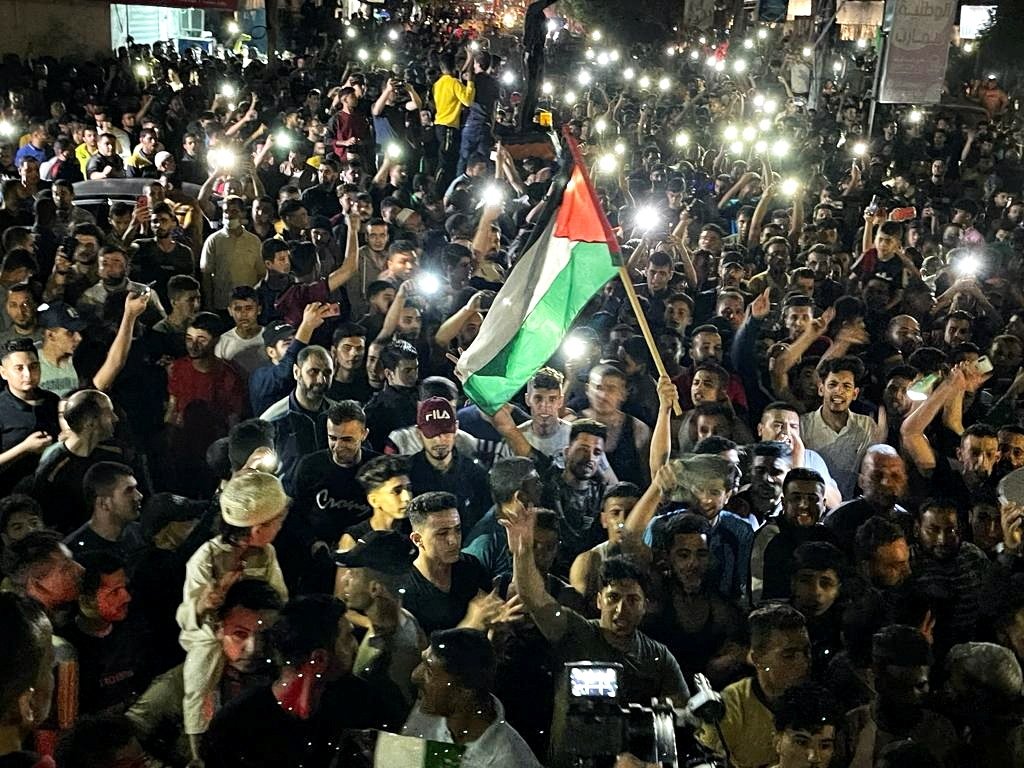 Palestinians celebrate in the streets following a cease-fire, in the southern Gaza Strip, Palestine, May 21, 2021. (Reuters Photo)
by DAILY SABAH WITH AGENCIES May 21, 2021 11:19 am

Thousands of people in the Gaza Strip and across the occupied Palestinian territory took to the streets to celebrate the cease-fire between Tel Aviv and Hamas, with many viewing it as a costly but clear victory for Palestinian resistance groups over Israel.

The 11-day war left more than 200 dead – the vast majority Palestinians – and brought widespread devastation to the already impoverished Hamas-ruled Gaza Strip. The truce faces an early test on Friday when tens of thousands of Palestinians attend weekly prayers at the Al-Aqsa Mosque complex in East Jerusalem, a flashpoint holy site revered by Jews and Muslims.

Young men waved Palestinian and Hamas flags, passed out sweets, honked horns and set off fireworks. Spontaneous celebrations also broke out in East Jerusalem and across the occupied West Bank. An open-air market in Gaza City that was closed throughout the war reopened and shoppers could be seen stocking up on fresh tomatoes, cabbage and watermelons. Workers in orange traffic vests swept up rubble from the surrounding roads.

"Life will return, because this is not the first war, and it will not be the last war,” said shop owner Ashraf Abu Mohammad. "The heart is in pain, there have been disasters, families wiped from the civil registry, and this saddens us. But this is our fate in this land, to remain patient.”

Thousands in Gaza Strip and occupied Palestinian territories take to streets to celebrate cease-fire, with many viewing it as costly but clear victory for Palestinian resistance groups over Israelhttps://t.co/aCa1JTE5ga pic.twitter.com/tf6rompK8Z

A reporter from Qatar-based Al-Jazeera said Palestinians in the Gaza Strip poured out onto the streets as soon as the cease-fire came into effect, cheering, "God is Great."

“And for them today, it’s considered actually the first day of the Eid al-Fitr religious festival since the aggression started before the last day of Ramadan and they didn’t really get to celebrate Eid,” Youmna al-Sayed reported.

The mood was more somber in Israel, where Prime Minister Benjamin Netanyahu faced angry accusations from his right-wing base that he had halted the war too soon. Like the three previous wars between the bitter enemies, the latest round of fighting ended inconclusively. Israel claimed to have inflicted heavy damage on Hamas with hundreds of bruising airstrikes, but once again was unable to halt the rockets.

Gideon Saar, a former ally who now leads a small party opposed to the prime minister, called the cease-fire "embarrassing.” Itamar Ben Gvir, head of the far-right Jewish Power party, tweeted that the cease-fire was "a grave surrender.”

Despite the horrifying toll, the war took on countless Palestinian families who lost loved ones, homes and businesses, Hamas claimed victory. It now faces the daunting challenge of rebuilding in a territory already suffering from high unemployment and the coronavirus outbreak.

The cease-fire was brokered by neighboring Egypt in the early hours of Friday right after the United Nations General Assembly (UNGA) held its special session discussing the horrors perpetrated in the Palestinian territories. During the meeting, U.N. Secretary-General Antonio Guterres said Thursday he was "deeply shocked" by the continued air and artillery bombardment by Israeli Defense Forces (IDF) in the Gaza Strip and called for an immediate cease-fire in the Palestinian enclave.

"I am deeply shocked by the continued air and artillery bombardment by the Israeli Defence Forces in Gaza," Guterres said during the UNGA's special session, urging a cease-fire between Israel and Palestinian resistance group Hamas. "If there is hell on earth, it is the lives of children in Gaza." Guterres called on all members of the international community “to do everything in their power to enable the parties to step back from the brink.”

Palestinian Foreign Minister Riyad al-Maliki told the UNGA that Israel "is targeting families as they sleep to sow the seeds of terror among our people." He said Tel Aviv is "occupying our land" and "persecuting" Palestinians. Qatari Foreign Minister Sheikh Mohammed bin Abdulrahman Al Thani and his Turkish counterpart Mevlüt Çavuşoğlu also voiced strong support for the Palestinian people and denounced Israel's brutality and aggression.

Al Thani said the continuing Israeli settlement activity in Palestine has taken on a scale that can be described as "ethnic cleansing of Palestinian people." He called Israeli attacks on residential areas, media and medical facilities in Gaza a "flagrant violation of international law."

Meanwhile, Çavuşoğlu reiterated that Turkey will not remain silent in the face of "unspeakable atrocities and brutality" in Palestine.

"A tragedy has been taking place in Palestine for many years. A heart-breaking tragedy is continuing before our eyes," Çavuşoğlu said. "Through repetition, the perpetrators of this tragedy want us to become insensitive to these outrageous crimes, the oppression of the Palestinian people, and violations of their basic human rights and freedoms," he added. Çavuşoğlu asserted that acts of Israeli aggression "amount to war crimes."

Earlier, the United States pressed Israel to wind down the offensive. Netanyahu announced that Israel had accepted the proposal late Thursday while emphasizing that "the reality on the ground will determine the future of the campaign.”

U.S. Secretary of State Antony Blinken plans to visit the region in the coming days "to discuss recovery efforts and working together to build better futures for Israelis and Palestinians,” the State Department said.

The tensions between Israel and Palestinians started in East Jerusalem during the Muslim holy month of Ramadan and spread to Gaza due to Israeli assaults on worshippers in the Al-Aqsa Mosque complex and the neighborhood of Sheikh Jarrah. Since the start of fighting on May 10, at least 232 Palestinians have been killed, including 65 children and 39 women, with 1,900 people wounded, according to the Gaza Health Ministry.

The U.S., Israel’s closest and most important ally, initially backed what it said was Israel’s right to self-defense against rocket fire. But as the fighting dragged on and the death toll mounted, the Americans pressured Israel to stop the offensive. In a rare public rift, Netanyahu on Wednesday briefly rebuffed a public call from President Joe Biden to wind things down, appearing determined to inflict maximum damage on Hamas in a war that could help save his political career. But late Thursday, Netanyahu’s office announced the cease-fire agreement.

In Washington, Biden hailed the cease-fire but was criticized by fellow Democrats for not speaking out more forcefully against Israeli actions. He also pledged humanitarian and reconstruction aid for Gaza. Biden, appearing briefly at the White House after news of the cease-fire agreement, promised to replenish Israel's Iron Dome missile defense system.

"We remain committed to work with the United Nations and other international stakeholders to provide rapid humanitarian assistance and to marshal international support for the people in Gaza and in the Gaza reconstruction efforts," Biden said.

Since the fighting began, Gaza’s infrastructure, already weakened by a 14-year blockade, has rapidly deteriorated, and airstrikes have damaged schools and health centers. Medical supplies, water and fuel for electricity are running low in the territory, on which Israel and Egypt imposed the blockade after Hamas seized power from the Palestinian Authority (PA) in 2007.

Standing in the midst of the ruins of a bombed house, reporter al-Sayed said the displaced families had already returned from U.N.-administered schools where they had taken refuge “because of the very bad humanitarian conditions” they faced there.

“There was no water, no electricity and they went there taking nothing with them,” she said. “But these people now in these circumstances are compounded by the crisis of the very high poverty and unemployment rates in the Gaza Strip, as well as the restrictions in regards to the reconstruction materials that are allowed to enter the Strip. They have no alternative but to wait for the funding of the construction of their homes again.”

Global leaders welcomed the deal but urged that the causes of the conflict be addressed. In a Twitter post German Foreign Minister Heiko Maas said, “good that there is now a cease-fire," but “now we have to deal with the causes, rebuild trust and find a solution to the Middle East conflict."

The president of the European Commission, Ursula von der Leyen, joined the chorus of leaders welcoming the cease-fire deal.

"EU stands ready to fully support Israeli and Palestinian authorities in these efforts," Borrell said. French Foreign Minister Jean-Yves Le Drian asserted that the cease-fire between Israel and Hamas highlights the need for a political solution to the crisis and France is determined to play role in this regard.

Palestinian Prime Minister Mohammad Shtayyeh on Friday praised international efforts to stop Israeli aggression in Gaza, including Egypt's peace initiative, according to Palestine's official news agency, WAFA. Israel committed horrible crimes, including killings, intimidation and genocide in the last 11 days, he said, according to Anadolu Agency (AA). He said Palestine would apply to the International Criminal Court (ICC) to file a case against Israel over the crimes.

Israel occupied East Jerusalem, along with the West Bank and Gaza – territories the Palestinians want for their future state – in the 1967 Arab-Israeli war. Israel annexed East Jerusalem in a move that has not been recognized internationally and views the entire city as its capital. The Palestinians view East Jerusalem – which includes major holy sites for Jews, Christians and Muslims – as their capital, and its fate lies at the heart of the Israeli-Palestinian conflict and has triggered serious violence in the past.