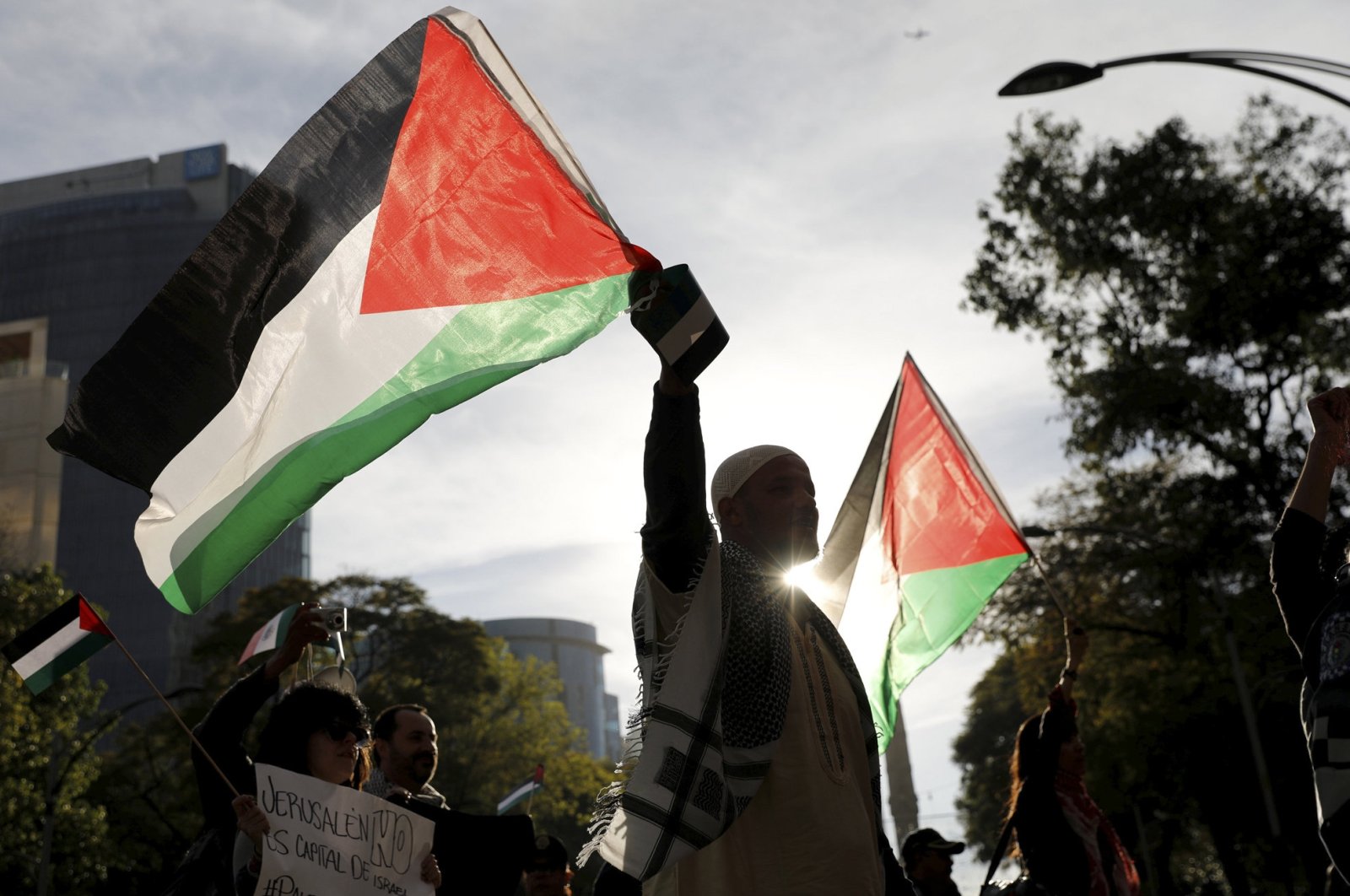 A man holds a Palestinian flag next to supporters of Palestine while demonstrating against U.S. President Donald Trump's recognition of Jerusalem as Israel's capital, outside the U.S embassy in Mexico City, Mexico, Dec. 25, 2017. (Reuters Photo)
by DAILY SABAH WITH AGENCIES Mar 24, 2021 12:33 pm

The United Nations, United States, Russia and the European Union met virtually Tuesday to discuss relaunching their long-stalled efforts to get Israel and the Palestinians to negotiate a two-state solution to the decades-old conflict.

A brief statement from the four Middle East mediators, known as the Quartet, said envoys discussed returning "to meaningful negotiations that will lead to a two-state solution, including tangible steps to advance freedom, security and prosperity for Palestinians and Israelis, which is important in its own right," The Associated Press (AP) reported.

There have been no substantive peace talks between Israel and the Palestinians since 2014, and the two sides are fiercely divided over the core issues of the conflict.

The U.N. sent out the statement on the Quartet discussion after polls closed in Tuesday’s Israeli election. Exit polls indicated there was no clear winner, leaving Prime Minister Benjamin Netanyahu’s fate uncertain and signaling continued political deadlock in Israel. With more than 85% of the vote counted by Wednesday morning, Netanyahu's Likud party and it's ultra-Orthodox and far-right allies fell short of a 61-seat majority – even if the Yamina party of Netanyahu ally-turned-critic Naftali Bennett were to join a Netanyahu-led government.

Bennett has refused to endorse either side. At the same time, a small Arab party emerged as a potential kingmaker on Wednesday morning after the latest count indicated it would cross the threshold to get into parliament. Like Bennett, the head of the Ra'am party, Mansour Abbas, has not ruled out joining either camp. The initial results showed the country as deeply divided as ever, with an array of small sectarian parties dominating the parliament.

The results also signaled a continuing shift of the Israeli electorate toward the right wing, which supports occupied West Bank settlements and opposes concessions in peace talks with the Palestinians.

During the campaign, Netanyahu emphasized Israel’s highly successful coronavirus vaccination drive. He moved aggressively to secure enough vaccines for Israel’s 9.3 million people, and in three months the country has inoculated some 80% of its adult population. He also tried to portray himself as a global statesperson, pointing to the four diplomatic accords he reached with Arab countries last year. Recently, Netanyahu also vowed to start flights from Tel Aviv to Mecca if he wins.

In late January, Guterres said there were "reasons to hope” for progress toward ending the Israeli-Palestinian conflict after years of inaction. He said the U.N. would explore all initiatives to facilitate "a true peace process” based on the two-state solution.

Clearly referring to the former U.S. administration, without naming then-President Donald Trump, Guterres said "we were completely locked down in a situation in which there was no progress visible.”

The Trump administration provided unprecedented support to Israel, recognizing Jerusalem as Israel’s capital, moving the U.S. Embassy from Tel Aviv, slashing financial assistance for the Palestinians and reversing course on the illegitimacy of Israeli settlements on land claimed by the Palestinians.

For more than three decades, the Palestinians have sought an independent state in the occupied West Bank, Gaza and East Jerusalem, territories seized by Israel in the 1967 war. Israel withdrew from Gaza in 2005 but imposed a crippling blockade when the Palestinian group Hamas seized power from Palestinian President Mahmoud Abbas’ forces in 2007.

Israel has annexed East Jerusalem – a step that is not internationally recognized – and has said it has no intention of dismantling any of its West Bank settlements, which the United Nations says are illegal under international humanitarian law.

The peace plan unveiled by Trump in February 2020 envisioned a disjointed Palestinian state that turned over key parts of the West Bank to Israel, siding with Israel on key contentious issues including borders and the status of Jerusalem and Jewish settlements. It was vehemently rejected by the Palestinians.

Soon after U.S. President Joe Biden was inaugurated on Jan. 20, his administration announced that it was restoring relations with the Palestinians and renewing aid to Palestinian refugees, a reversal of Trump’s cutoff and a key element of its new support for a two-state solution.

Guterres made clear in January that Biden’s more even-handed approach opened the possibility of Quartet meetings previously blocked by the U.S., as well as broader peace efforts.

The Quartet was established in 2002 and has been criticized for its failure to get either Israel or the Palestinian Authority (PA) to change their policies and negotiate an end to their conflict. Tuesday’s statement by the Quartet envoys did not mention any future steps. It did say the envoys discussed "the situation on the ground, in particular the COVID-19 pandemic, the unsustainable disparity in economic development between Israelis and Palestinians, and the need for the parties to refrain from unilateral actions that make a two-state solution more difficult to achieve.”

Hundreds of Palestinians have been killed in recent years as they opposed the blockade, which Israel justifies on security grounds. The Israeli raids came shortly after Netanyahu visited the southern city of Beersheba to try to garner voter support.