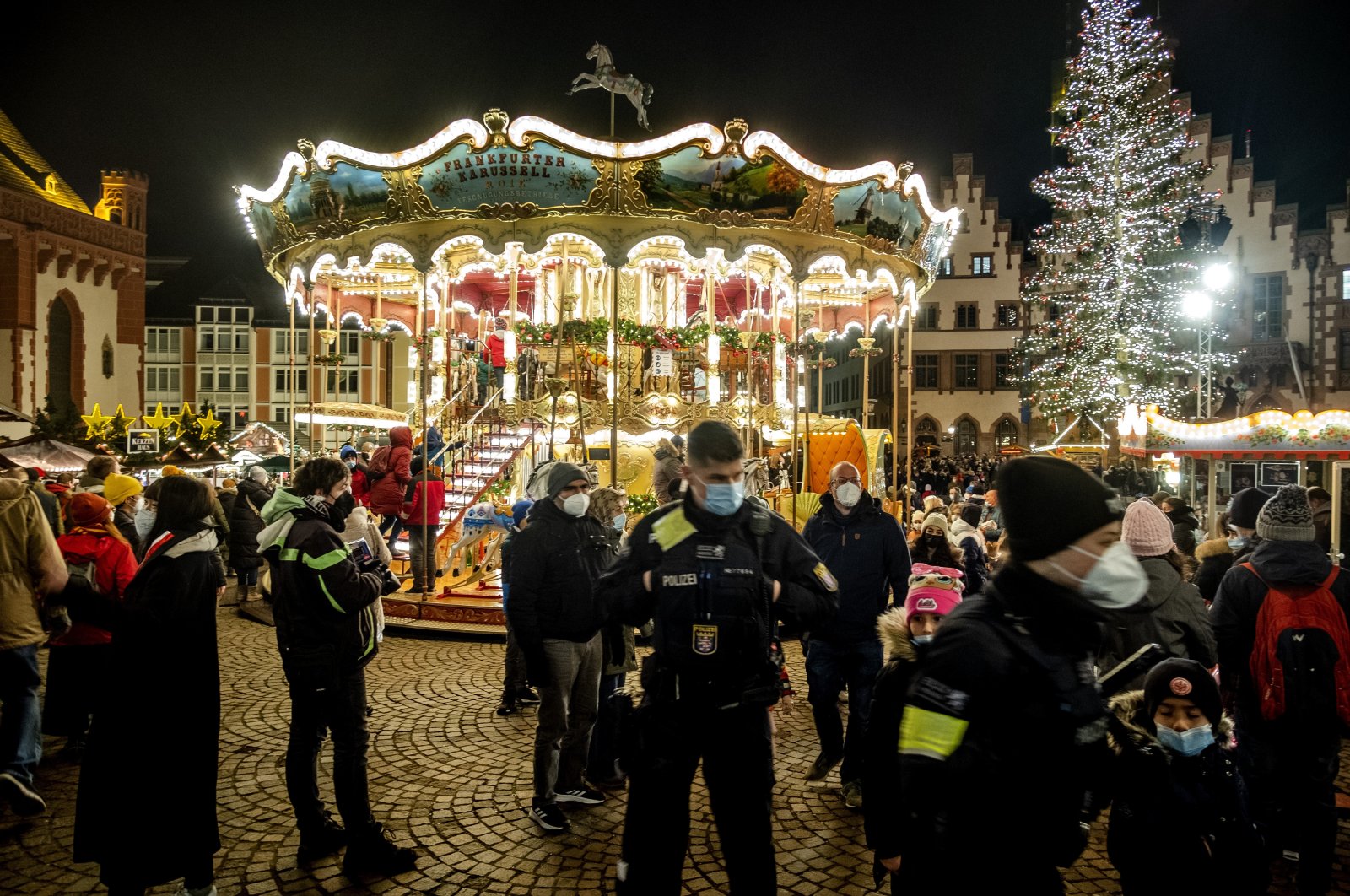 December has been overshadowed by the rapidly spreading omicron COVID-19 surge, with leading European states imposing new rules ahead of winter. Still, gathering for Christmas will be much easier than a year ago in many other places around the world

Omicron's rise has heralded another pandemic-tinged Christmas for billions, with Santa's arrival and longed-for family reunions overshadowed by the prospect of yet more COVID-19 restrictions.

Festive jokes about reindeer having "herd immunity" and millions isolating "Home Alone" may be wearing thin, but the emergence of the ultra-infectious omicron variant means the pandemic isn't going anywhere.

For a second straight year, surging infections have complicated yuletide plans from Sydney to Seville.

In Bethlehem – the city Christians believe was Jesus' birthplace – hoteliers expecting an influx of tourists have been disappointed. After a near-total pandemic lockdown last year, Israel's borders are again closed.

This year, like last, midnight mass in the city on Christmas Eve will be reserved for a small circle of people by invitation only.

In Europe, governments are reimposing misery-inducing safety measures that are draining the fun from Christmas for many. The Netherlands is back in lockdown while Spain and Italy have made wearing masks compulsory outdoors.

And with the United Kingdom recording a record high number of COVID-19 infections on Thursday, British Prime Minister Boris Johnson suggested getting a vaccine booster shot as a Christmas gift for relatives.

On Thursday Italy reimposed the mandatory wearing of face masks in outdoor spaces, with a higher grade version required for cinemas, theaters or on public transport.

"It's a difficult phase," said Health Minister Roberto Speranza, whose country has banned all celebrations and closed nightclubs until the end of January.

Greece said people must wear face masks both indoors and outside during Christmas and New Year's gatherings.

Spain's Catalonia was to reimpose a night-time curfew for a fortnight from Christmas Eve, while Scotland announced it would close nightclubs from next week, including on New Year's Eve.

Nationwide, Spain will reintroduce obligatory masks outdoors starting Friday, except for sporting activities, or when alone or with household members in mountainous or seaside settings.

Ecuador became the first country to make coronavirus vaccines obligatory for children as young as five, following the arrival of the omicron variant in the South American country. Vaccination is mandatory in Tajikistan, Turkmenistan, Indonesia, Micronesia and New Caledonia, for adults.

China locked down the northern city of Xi'an – home to the world-famous Terracotta Warriors – to stamp out a cluster of several hundred cases.

"I think it is necessary to have the lockdown," said a Xi'an resident, who wanted to be identified only as Yuan.

Omicron has not been reported in Xi'an, with only dozens of cases of the less infectious delta variant detected in the city of 13 million people in recent days. But the Chinese government, in pursuit of its zero-case strategy ahead of the Beijing Winter Olympics, has ordered all Xi'an residents to stay indoors. Only one person per household can go outside every two days to buy necessities, while nonessential businesses are closed.

February's Olympics are set to be the most restrictive mass sporting event since the pandemic began, with international spectators banned and all participants required to stay inside a closed-loop system.

Meanwhile, every other person in Germany is dissatisfied with the organization of the coronavirus vaccination campaign in the country, a survey released on Friday showed. Nineteen percent of respondents to a survey conducted by research institute YouGov on behalf of the Deutsche Presse-Agentur (dpa) said they were "very dissatisfied," and another 31% said they were "dissatisfied" with how the campaign has been conducted over the past 12 months.

Only 36% and 7% said they were "satisfied" and "very satisfied," respectively. A further 7% did not respond.

On Dec. 26, 2020, the first people in Germany were immunized against COVID-19. Officially, the vaccination campaign started throughout the European Union on Dec. 27.

Some 21.8 million people in Germany (26.3% of the population) have not yet been vaccinated.

German Chancellor Olaf Scholz wants to push vaccination over the Christmas holidays and into the new year. He has set a target of 80% of the population being vaccinated at least once by Jan. 7.

Scholz has also advocated that the Bundestag decide on a general vaccination requirement early next year.

According to the YouGov survey, 62% of people in Germany are in favor of such a step. Only 29% are against it, and 9% declined to answer.

Still, Christmas gatherings will be easier than a year ago in many other places around the world. Most Australians are allowed to travel interstate over the festive break for the first time in two years, bringing a touch of Christmas sparkle even as case numbers hit record highs.

"We've all witnessed the moving scenes of people at airports after months of separation," Sydney's Catholic Archbishop Anthony Fisher said in his Christmas message. "In such dark times, Christmas is a ray of light, a sliver of hope."

Millions of Americans are also on the move during the busy travel days before Christmas, even as COVID-19 infections with omicron surpass the peak of the delta wave and hospitals run out of space for patients.

However, thousands of them are set to face a grim holiday weekend, with major carrier United canceling 120 flights because infection numbers had impacted flight crews and other operations.

In one sign of people's darkened mood, one of the most popular shows on Netflix in the run-up to Christmas has been "The Unforgivable," a less-than-festive tale of a murderer released from prison and struggling to win redemption.

Books on identity and slavery topped the New York Times bestsellers and a profanity-laden rant about a bad break-up led the Spotify charts – beating even Mariah Carey's perennial Christmas hit "All I Want for Christmas Is You."

In Britain, Rage Against The Machine's distortion-laden "Killing In The Name" was voted the country's favorite Christmas No. 1 of all time.

But angst borne from a seemingly interminable crisis, long testing queues, canceled flights and close contact notifications will not prevent Santa from doing his rounds.

The hirsute spreader of holiday cheer has reportedly been cleared for travel in Canada's airspace after showing proof of vaccination and a pre-flight negative COVID-19 test, Ottawa's transport minister said.

Santa's flight crew – including reindeer Rudolph, whose "nose shone red and bright (but) made sure he had no COVID-19 symptoms before taking off" – have also been given the all clear.

And Australian authorities said they were working round the clock to ensure "Operation Present Drop" goes smoothly.

"Our air traffic controllers will be guiding Santa safely through Australian airspace, using our surveillance technology to track him twice every second to ensure we keep Santa and his reindeer safe, on time and on track to deliver presents," said aviation safety authority Airservices.

"He's cleared to fly at 500ft so he can skim the rooftops and deliver his presents quickly and quietly -- after all, his magical sleigh isn't your average aircraft."

Denmark discovered an illegal mink farm that had been operating despite a ban, after the country last year culled millions of the animals over fears they could carry coronavirus and jeopardize vaccine effectiveness.

But in some positive news, the U.S. Food and Drug Administration (FDA) authorized Merck's COVID-19 pill for high-risk adults, a day after giving the green light to a similar Pfizer product. The pill developed by Merck is taken within five days of symptom onset.

It has been shown to reduce COVID-19 hospitalizations and deaths by 30% among at-risk people, whereas Pfizer's pill reduced the same outcomes by almost 90%.

Pills that are available at pharmacies are likely to be much easier to access than synthetic antibody treatments, which require infusions at hospitals or specialized centers.

The United States has spent $5.3 billion procuring 10 million courses of the Pfizer treatment, according to the White House. But health authorities maintain that vaccines are still the best protection against any variant, and are encouraging booster shots.

AstraZeneca said Thursday that a third dose of its COVID-19 vaccine "significantly" lifted antibody levels against the omicron strain in a laboratory study.