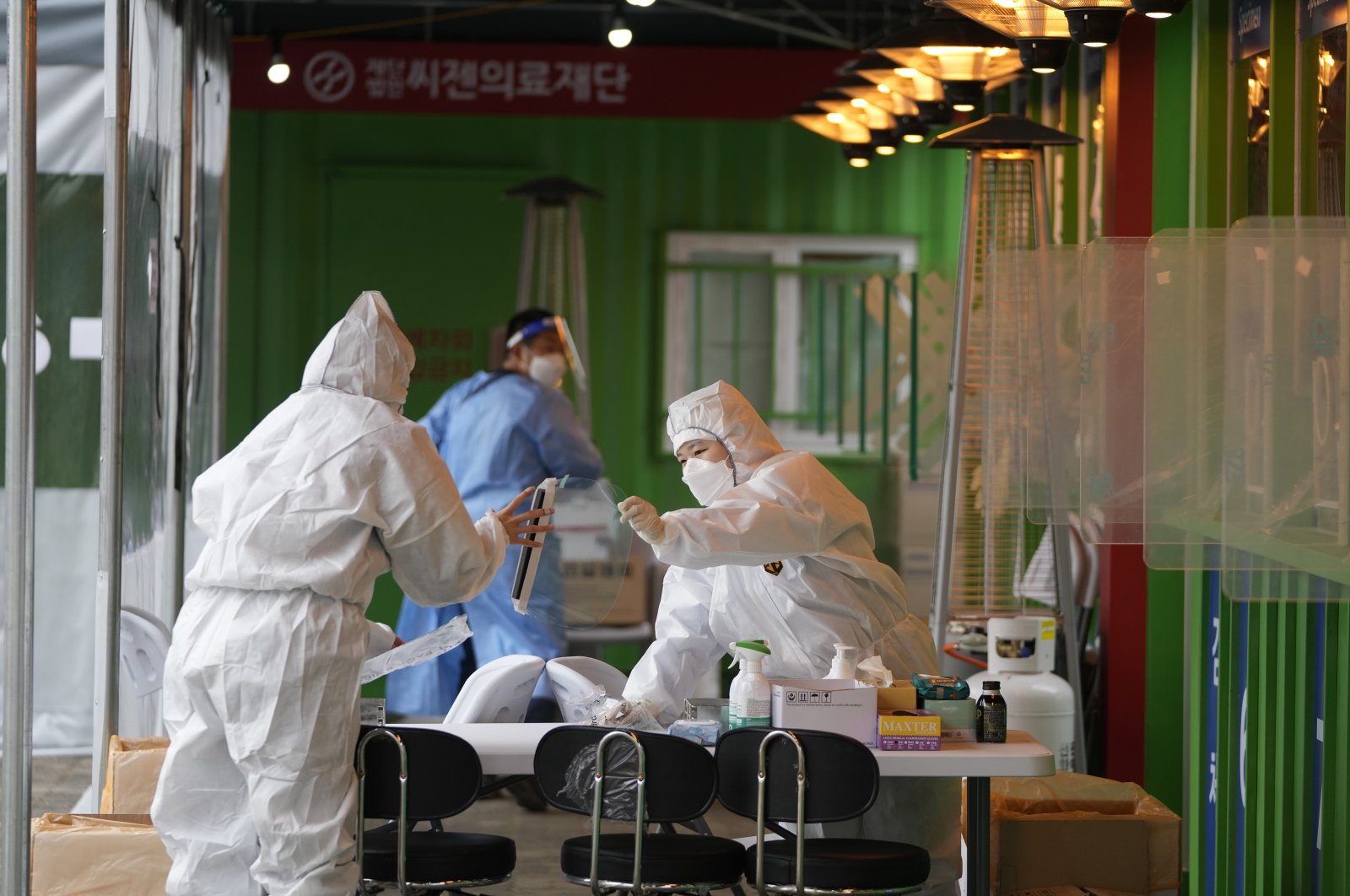 Backdropped by an 11% global rise in COVID-19 infections last week, the world's health agency declared that the risk posed by the omicron variant is still 'very high'

Omicron still poses a "very high" risk and could overwhelm health care systems, the World Health Organization (WHO) warned on Wednesday, as the highly transmissible coronavirus variant fuelled record outbreaks in many countries.

Case numbers have shot up 11% globally in the last week, forcing governments from China to Germany and France to find a difficult balance between anti-virus restrictions and the need to keep economies and societies open. The Netherlands and Switzerland said omicron had become the dominant strain in their countries, and while some studies suggested it causes milder COVID-19, the WHO urged caution.

"The overall risk related to the new variant of concern omicron remains very high," the U.N. health agency said in its COVID-19 weekly epidemiological update. "Consistent evidence shows that the omicron variant has a growth advantage over the delta variant with a doubling time of two to three days."

The WHO said early data from Britain, South Africa, and Denmark – which currently has the world's highest rate of infection per person – suggested there was a reduced risk of hospitalization for omicron compared with delta. But it added that further data was needed to understand omicron's severity.

And despite those studies, omicron's rapid growth "will still result in large numbers of hospitalizations, particularly amongst unvaccinated groups, and cause widespread disruption to health systems and other critical services," warned Catherine Smallwood, WHO Europe's COVID-19 incident manager, according to Agence France-Presse (AFP).

Europe was once again a hot spot for the pandemic, which is known to have claimed more than 5.4 million lives around the world. France, Britain, Greece and Portugal all reported record daily case numbers on Tuesday. France reported almost 180,000 infections over 24 hours.

To hold back the tide, many nations on the continent have brought back curbs with heavy economic and social consequences.

Contact restrictions were in place in Germany for the second year in a row heading into the New Year, as Europe's biggest economy shut nightclubs and forced sports competitions behind closed doors. It also limited private gatherings to 10 vaccinated people – or two households where any unvaccinated people are present.

Finland on Tuesday said it would bar unvaccinated foreign travelers from entering. Only residents, essential workers or diplomats will be exempt. The Nordic country, like Sweden, had begun requiring negative tests for incoming nonresident travelers from Tuesday, a day after Denmark applied the same measure.

But the Belgian government's plans to introduce further restrictions were thwarted as a court suspended an order closing entertainment venues. Prime Minister Alexander De Croo had announced the original measure on Dec. 22 as Belgium saw a sharp increase in the percentage of tests showing the omicron variant.

The COVID-19 spikes around the world have caused severe disruptions to travel over the holidays, with thousands of flights cancelled worldwide. They are also threatening sports events again.

England's top football league is grappling with record cases, the top American sports leagues have also been hit, as the United States battles a surge fueled by omicron, as well as large pockets of unvaccinated people and a lack of access to quick and easy testing.

The U.S. Centers for Disease Control (CDC) has halved the isolation period for asymptomatic cases to try and limit disruptions and mass labor shortages.

U.S. President Joe Biden said the country was generally well prepared, though some hospitals could be "overrun."

"I want to get rid of COVID-19 and quarantines," said teacher Robin Myers on Tuesday. "So that my kids can be normal again and see their friends and be out and be social."

Much of Asia has largely managed to keep omicron at bay even as the variant rages in other parts of the world, but the region that is home to most of the globe's population is bracing for what may be an inevitable surge.

Strict quarantine rules for arrivals and widespread mask wearing have helped slow the spread of the highly contagious variant in Asia. Countries such as Japan, South Korea and Thailand quickly reinstated entry and quarantine restrictions in recent weeks after relaxing them in the fall.

But cases are mounting, and experts say the next few months will be critical. Those fears have been amplified by doubts about the effectiveness of the Chinese-made vaccines used in China and much of the developing world.

"Once the pace picks up, its upsurge would be extremely fast," Dr. Shigeru Omi, a top medical adviser to Japan's government, told The Associated Press (AP).

In India, which has been getting back to normal after a devastating COVID-19 outbreak earlier this year, omicron is once again raising fears, with more than 700 cases reported in the country of nearly 1.4 billion people.

The capital, New Delhi, banned large gatherings for Christmas and new year celebrations, and many other states have announced new restrictions, including curfews and vaccination requirements at stores and restaurants.

At the crowded Chandni Chowk market in New Delhi, many people were shopping without masks this week. Cycle rickshaw driver Mahesh Kumar said he is afraid of passengers who don't wear masks.

"There are many people who don't believe in this disease. They think it doesn't exist. But I am very scared. I have children and a family," he said. "If something happens to me, who will take care of them?

Australia is already dealing with multiple COVID-19 surges, with a state leader saying Wednesday that "omicron is moving too quickly."

Australia's COVID-19 infection hit a new record on Wednesday and congested testing centers in the country's most populous state. The clash at test centers in New South Wales, home to Australia's largest city, Sydney, is partly attributed to the requirement of neighboring Queensland for out-of-state tourists to take negative PCR tests prior to arrival.

Queensland's so-called "tourist tests" came under heavy criticism from New South Wales after tourists filled its testing centers, delaying results by several days. Australia is gripped by a COVID-19 outbreak led by omicron, but authorities have ruled out a lockdown so far.

Elsewhere, Thailand has topped 700 cases, South Korea has more than 500 and Japan, over 300. China, which has some of the strictest virus controls in the world, has reported at least eight.

Only four cases have been reported in the Philippines, where people flocked to shopping malls ahead of Christmas and to Mass in the biggest Roman Catholic nation in Asia. Some hospitals have even begun dismantling COVID-19 wards in a move experts say could prove to be premature.

Japan managed to delay the spread of the new variant for about a month largely thanks to its reimposition of entry restrictions, mandatory COVID-19 tests for all arrivals and the isolation of all passengers on a flight if anyone tested positive for omicron. But the barrier was broken last week when the first locally transmitted cases were confirmed in the neighboring cities of Osaka and Kyoto. Experts are urging the government to prepare for an imminent wave of infections by increasing testing, speeding up booster shots and preparing more beds at hospitals.

"We want to believe the omicron cases could be mild, but its fast-paced infections could quickly multiply the number of patients and could still overwhelm hospitals," Omi said.

Taiwan, where wearing a face mask is near universal in major cities, has started to offer booster shots of the Moderna vaccine and is urging people get a third shot before an expected influx of people returning home for Lunar New Year at the end of January.

Preliminary research has shown that booster shots of the Pfizer, AstraZeneca and Moderna vaccines offer continued, though diminished, protection against omicron.

However, a Hong Kong University study that has yet to be published found that China's widely used Sinovac vaccine does not generate enough antibodies to protect against omicron, even with a booster shot, according to a university news release. Hong Kong offers both the Sinovac and Pfizer vaccines.

Sinovac did not respond to a request for comment. Chinese officials have said their vaccines are still effective.

"Our inactivated vaccines are still rather reliable and cover a range of antigens. Therefore, they won't be completely ineffective against omicron," Zhong Nanshan, a top government doctor, said at a public forum.

Some countries that relied on the Chinese vaccines are turning to others for boosters.

Thailand, which largely used Sinovac and Sinopharm, another Chinese vaccine, is offering booster shots of AstraZeneca or Pfizer. Indonesia, where Sinovac has been the mainstay of a campaign to vaccinate its 270 million residents, is offering a Moderna booster for health care workers. The government is also planning boosters for the general population in January, though it hasn't said which vaccine.

China's attitude toward the virus, omicron or not, is to stop transmission in its tracks, and the country appears to be getting even tougher with the approach of the Beijing Winter Olympics in February.

Officials locked down the city of Xi'an, a city and administrative area of 13 million people last week, amid a delta outbreak that has infected hundreds of people. On Monday, they ordered everyone to stay at home until another citywide round of testing was completed.

Residents complained on social media about the sudden ban. Many were relying on instant noodles and other packaged food. Some worried how they would get enough food in the coming days, especially fresh vegetables.

China quarantines those arriving from abroad for weeks, depending on the province, with three weeks being the most common.

How China's zero-COVID-19 policy will play out at the Olympics is a major question. Athletes and visitors will not be allowed to leave the Olympic zones, and those attending such as officials, journalists and venue staff will be tested every day.

To contain a deadly delta-driven surge in South Korea, the government this month restored its toughest distancing rules with a four-person limit on private gatherings and a 9 p.m. curfew on restaurants.

Health experts predict it's only a matter of time before omicron comes.

"Omicron has such a high transmission rate that it's too obvious that it'll become the dominant variant in South Korea at some point," said Jaehun Jung, a professor at Gachon University College of Medicine in South Korea.