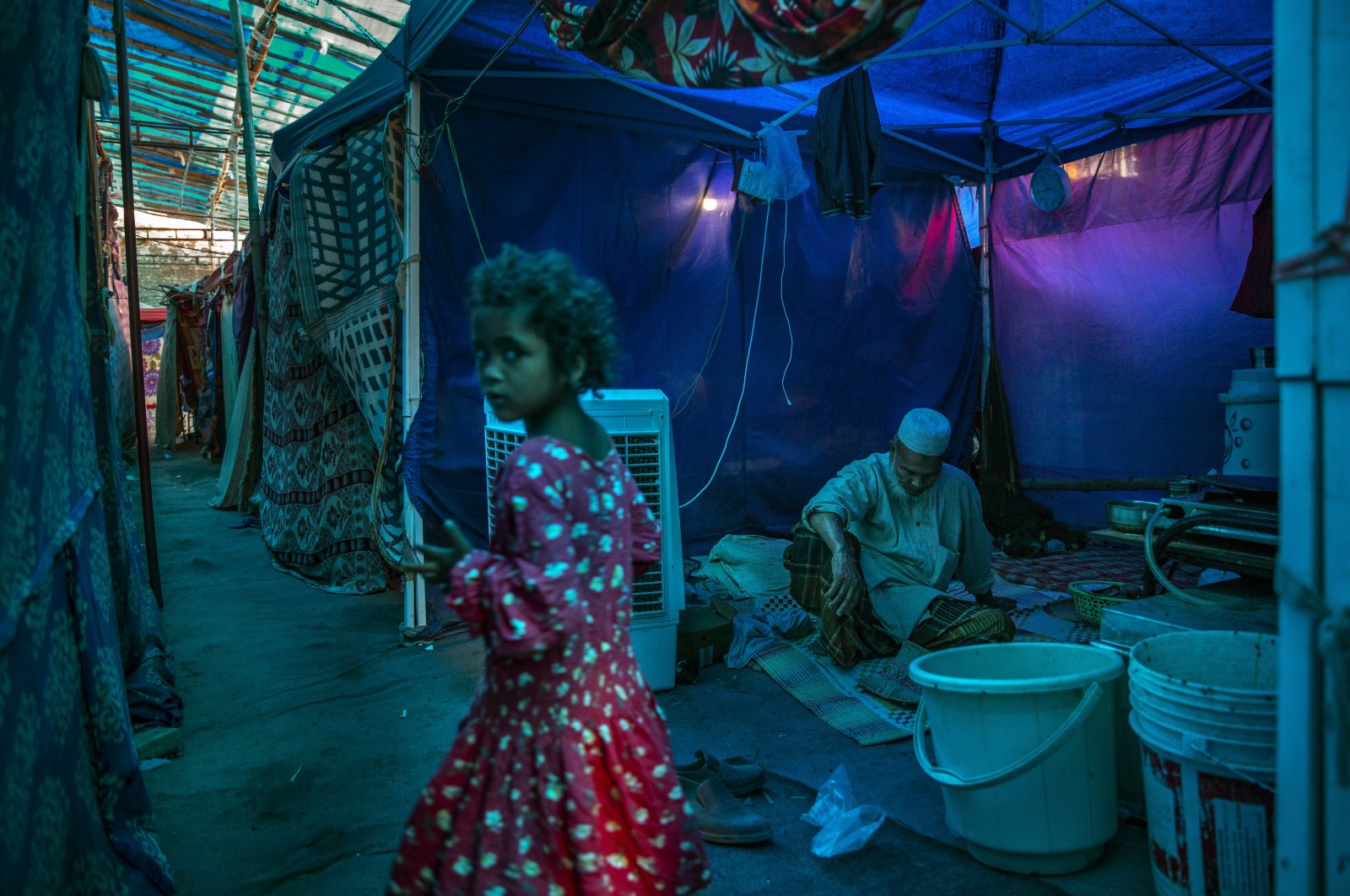 A young Rohingya refugee girl walks past an elderly man sitting inside a tent at a refugee camp alongside the banks of the Yamuna River on the southeastern border of New Delhi, India, July 1, 2021. (AP Photo)
by ASSOCIATED PRESS
Aug 02, 2021 2:10 pm

Refugees across the globe suffer from being left without essential COVID-19 vaccines, as the World Health Organization urges nations to prioritize immunizing asylum seekers, placing them in the second priority group for at-risk people

Salimullah, a Rohingya refugee, has been living in the Indian capital of New Delhi since he fled violence in Myanmar in 2013.

Stateless – and now homeless after a fire razed his camp – the 35-year-old lives in a tent with as many as 10 other people at a time. Before the pandemic, he ran a small business selling groceries from a shack. But that was closed during India's harsh, monthslong lockdown, and his savings are gone. He and his family have been surviving on donated food, but he has to return to work soon, despite the risk of getting COVID-19 and infecting others.

Although some refugees in India have begun getting vaccines, no one in his camp has received shots. Just over 7% of India's population is fully vaccinated and vaccine shortages have plagued the nation of almost 1.4 billion.

"The disease doesn’t discriminate. If we get infected, locals will also,” Salimullah said. It wasn’t supposed to be like this. For months the World Health Organization (WHO) urged countries to prioritize immunizing refugees, placing them in the second priority group for at-risk people, alongside those with serious health conditions.

That is because refugees inevitably live in crowded conditions where the virus can spread more easily, with little access to the most basic health care or even clean water, said Sajjad Malik director of the U.N. refugee agency’s division of resilience and solutions. "They are really living in difficult situations,” he said.

Over 160 countries included refugees in their plans, but these have been upended by supply shortages. According to the WHO, some 85% of vaccines have been administered by rich countries. In contrast, 85% of the world's 26 million refugees live in developing countries struggling to vaccinate even the most vulnerable, according to the U.N. refugee agency.

Some countries, like Bangladesh, pinned their hopes on COVAX, the global initiative aimed at vaccine equity. In February, it altered its original vaccination plan to include nearly one million Rohingya refugees in crowded camps on the country’s border with Myanmar. But so far, it has received only 100,620 doses – less than 1% of its allocated shots – from COVAX, leaving Rohingya refugees without. COVAX has not only faltered in Bangladesh.

Globally the initiative has delivered less than 8% of the 2 billion vaccine doses it had promised by the end of this year. Even in countries where refugee vaccination has started, supplies remain an issue.

In Uganda’s Bidi Bidi camp, less than 2% of 200,000 refugees have received a single shot of the AstraZeneca vaccine, with second doses in short supply after India stopped exporting them after its own cases exploded. Other obstacles ranging from language barriers to misinformation about vaccines are exacerbating the problem. Thomas Maliamungu, a South Sudanese refugee and teacher in Bidi Bidi, said he overcame his fears to get his first shot only after it was made mandatory for teachers.

"Based on the rumors on the ground, I never wanted it," he said. Some countries, like India, initially required documents like passports or other government identification, which many refugees lack, to register for vaccines.

Online registration was also a barrier for many without internet access. India started vaccinating people in January. Four months later documentation requirements were eased. The Chin community in New Delhi, a Christian minority who fled the violence in Myanmar, started getting shots in June. By then, India’s monstrous surge had already ripped through their crowded settlement, with entire families falling sick and dying. With the city’s health system collapsing, refugees struggled to get a hospital bed and private hospitals were charging around $4,000 for a few days, said James Fanai, president of the Chin Refugee Committee in Delhi.

"Getting oxygen was almost impossible,” he said.

Registration initiatives, like volunteers going to camps to help refugees sign up for vaccines, have sometimes fallen flat, said Miriam Alía Prieto, the vaccination and outbreak response adviser for Doctors Without Borders.

"Many aren’t in camps but living with relatives,” she said, noting refugee populations in Jordan and Lebanon. Due to the transient nature of some refugee populations, some countries in Europe are gravitating towards using the single-shot Johnson & Johnson vaccine for refugees.

Prieto said that Spain is waiting for these vaccines to arrive. Greece began a drive for those living in migrant camps and shelters in early June using Johnson & Johnson shots. Refugees are getting shots in EU countries, but the situation is worse in other parts of the continent, said Frido Herinckx, COVID-19 Operations Manager at the International Federation of the Red Cross and Red Crescent’s Regional Office for Europe.

For example, only some 1.5% of people in Armenia and 4.2% in Ukraine are fully vaccinated. In some countries, like Montenegro, the fear of arrest or deportation remains an obstacle and, he said, Red Cross volunteers are accompanying migrants, including refugees, to help them get shots while ensuring they were not arrested afterwards.

"So (it’s) keeping that firewall between ... the border guards and the health service,” he said. But even if vaccine supply increases there’s the issue of liability – the question of who is responsible in rare cases of serious side effects from the vaccine.

Humanitarian organizations can apply to distribute vaccines under the humanitarian buffer – a contingency mechanism set up by COVAX as a last resort. But doing so also means accepting liability for any serious side effects. Prieto said Doctors Without Borders wants to try to get vaccines from the manufacturers but does not want to assume liability.

Many vaccine makers have refused to ink deals for vaccines or ship them without that stipulation. Another obstacle, she said, is that sometimes a vaccine greenlit by WHO is not yet authorized by the host country, creating a mismatch between what vaccines are available and what can be used.

"We’re in this weird phase where there’s a drug being approved, but no one wants to take liability,” she said. As the virus continues to spread, the difficulties facing vaccinating refugee populations around the globe could spell disaster for host communities.

"The virus doesn’t distinguish between a national and a refugee. So, if you don’t protect and save your refugee population it becomes a public health issue,” Malik said.