6 killed by regime in Syria’s Idlib, Assad sworn in for 4th term 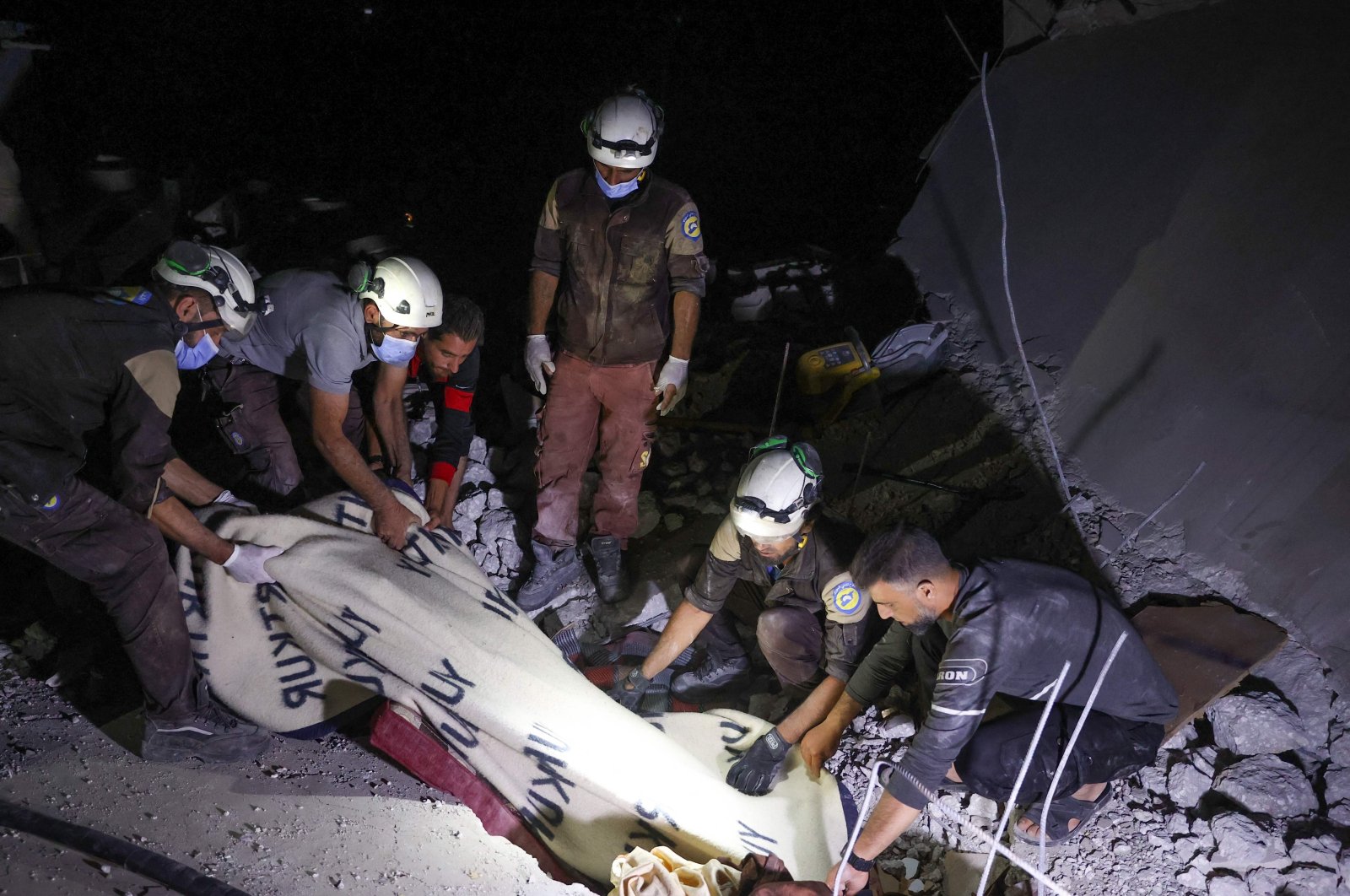 Members of the Syrian Civil Defence (White Helmets) cover the body of a woman with a blanket as they remove it from the rubble of a house hit by regime artillery fire in the village of Ehsim, in the last major opposition bastion of Idlib, northwest Syria, July 18, 2021. (AFP Photo)
by DAILY SABAH WITH AGENCIES Jul 18, 2021 11:31 am
RECOMMENDED

Six civilians, including two children, were killed in shelling by the Bashar Assad regime and its backers in Syria’s northwestern Idlib province Saturday as Assad was sworn in for a fourth seven-year term in the war-torn country.

Regime forces stationed in the Al-Hamidiya base in southeast Idlib violated the cease-fire by shelling a village with surface-to-surface missiles. According to the Syria Civil Defense, or White Helmets, an initial assessment of a village in the Jabal al-Zawiya province found that three women were also killed and several civilians injured in the attack.

Six civilians, including three children and one civil defense volunteer, have been killed in attacks by regime forces on the Sarja village since Friday.

UNICEF said 512 children were verified killed in fighting in Syria last year, the majority in the northwest where there are 1.7 million vulnerable children, many of whom have fled violence several times.

A Turkish-Russian cease-fire has largely been held in Idlib since March 2020, after halting the latest deadly regime offensive on the region of some 3 million people. But violations of that truce have increased in the south of the bastion in recent weeks.

Meanwhile, after winning 95% of the vote in an election dismissed abroad, Assad took office for a fourth term in Syria. It was the second presidential poll since the start of the decadelong civil war that has killed almost half a million people and battered the country's infrastructure. Assad, 55, was sworn in on Syria's constitution in the presence of more than 600 guests, including ministers, business people, academics and journalists, organizers said.

The elections "have proven the strength of popular legitimacy ... conferred on the state," Assad claimed in his inauguration speech. They "have discredited the declarations of Western officials on the legitimacy of the state," he said.

In power since 2000, his new term starts with a country still devastated by war and sliding deeper into a worsening economic crisis. Accused by European and the United States governments for most of the war’s atrocities, Assad has faced widening sanctions that also target his close aides and state institutions.

The United Nations estimates that more than 80% of Syrians live under the poverty line. The Syrian currency has been losing value, and basic services and resources are scarce or offered at exorbitant parallel market prices. Fighting has largely subsided, but parts of Syria remain out of regime control, and foreign troops and militias are deployed in different parts of the country.

Assad claimed that Syrian money stuck in Lebanese banks – which he estimated at between $40-60 billion – was a bigger challenge than the sanctions. Lebanon is facing its own economic crisis. That deprives Syria of funds, he said and pressures the Syrian pound, now trading at around 3,000 to the dollar, compared to 47 pounds to the dollar at the start of the war.

Assad is supported by Iran and Russia, which sent troops and assistance that have propped him up throughout the war. U.N.-led talks to end the conflict have failed to make any progress.

Buoyed by military victories, Assad called on Syrians in exile to return home, saying they were “misled by the illusion” of a rebellion against his rule.

After the swearing-in, Assad met with visiting Chinese Foreign Minister Wang Yi, who arrived in Damascus earlier Saturday, the most senior Chinese official to visit Damascus in years. Assad thanked China for its support. Both sides discussed Syria possibly taking part in China's "Belt and Road" infrastructure and trade initiative.

Nearly half of Syria’s prewar population is either displaced or living in neighboring countries or Europe as refugees. The war has left nearly half a million killed, tens of thousands missing and devastated the country's infrastructure.

The conflict that began in 2011 started after the regime cracked down on peaceful protests, turning the opposition against the decadeslong rule of the Assad family into an armed rebellion. Assad took over in 2000 after the death of his father Hafez, who seized power in 1970 in a bloodless military coup.

The May election had no independent monitors. Assad won 95.1% of the vote with symbolic competition from two candidates.