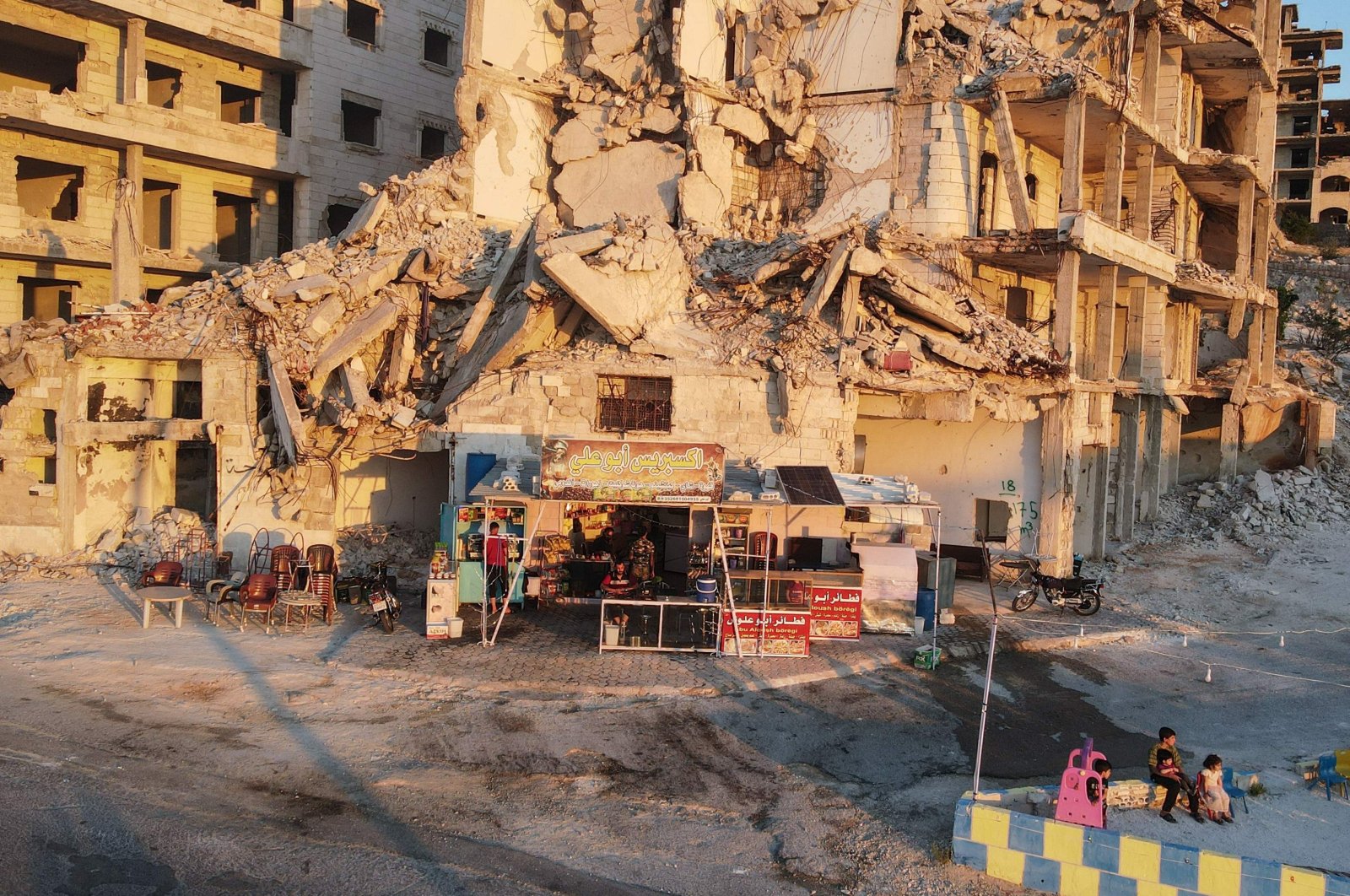 Children gather in the playground in front of Abu Ali's cafe, set up on the ground floor of a building heavily damaged during the civil war, in the Jabal al-Arbain hiltop residential area, in the Syrian town of Ariha in the opposition-held northwestern Syrian Idlib province, July 11, 2021. (AFP Photo)
by DAILY SABAH WITH AGENCIES Jul 12, 2021 9:25 am

Civilians in Idlib breathed a sigh of relief when the last border crossing enabling humanitarian aid to come into northwest Syria was not shut; however, the Syrian regime seems set on cracking down on already vulnerable civilians, increasing its attacks on a daily basis

Another child was killed in an attack by the Bashar Assad regime in Syria’s northwestern Idlib province on Monday, while two were injured as the regime continues its violations of a ceasefire struck last year.

Regime forces stationed in the Jurin area of northwestern Hama violated the cease-fire by shelling the villages of Hmeimat, Qalidin, Zaqqum and Qastun.

One girl was killed in the attack, while two other children were injured and taken to nearby hospitals.

Just a day ago, regime forces fired shells at the Maghara and al-Bara villages in Idlib, local sources stated.

The Syrian Network for Human Rights (SNHR) on the same day condemned the attack, saying: “Attacks of this nature spread terror and panic among civilians, leading them to flee their lands and homes in an attempt to reach safety, and forcibly displacing them, with the number of internally displaced persons within Syria currently standing at approximately 6.5 million Syrian citizens in total.”

It urged the international community to put pressure on the regime and its allies “to force them to compensate the displaced victims, rehabilitate homes and vital centers, (and) support the process of political transition.”

The renewed attacks came after the United Nations Security Council last week renewed a resolution for the use of the Bab al-Hawa border gate from Turkey into Syria’s opposition-held northwest.

U.N. officials on Sunday published a joint statement welcoming the renewal of Security Council authorization for cross-border assistance to north-west Syria, as it will continue to offer a lifeline to millions of people.”

According to the U.N., the crisis in Syria is today even more critical than ever as an economic collapse has left more than 13 million people in need of humanitarian assistance.

“We underline the humanitarian nature and necessity of accessing people in need through cross-border and cross-line mechanisms, and we take this opportunity to express our commitment to work with all parties to ensure that cross-line missions are authorized and sustained,” the statement said.

“A large-scale U.N. crossborder response remains essential to meet the urgent and growing needs in northwest Syria. While the cross-border and cross-line missions are crucial complementary efforts to reach those in need,” it underlined further, highlighting that only a political solution can resolve the crisis in Syria.

The U.N. called on all parties to find a resolution to the ongoing conflict.

Most recently, Turkey on late Friday welcomed the U.N. Security Council’s decision to extend the resolution on cross-border humanitarian aid to Syria.

Almost a million people have fled the Assad regime’s offensive on the last opposition bastion since December 2019 with many seeking refuge in overcrowded tent camps near the Turkish border. Upon the Assad regime's attack, Turkey launched Operation Spring Shield. After, the surge of violence decreased following a Turkey-Russia brokered cease-fire in the region.

UNICEF said 512 children were verified killed in Syria last year. The majority of thoses deaths were in the northwest where there are 1.7 million vulnerable children, many of whom have fled violence several times.

However, the Syrian regime has consistently violated the terms of the cease-fire, launching frequent attacks inside the de-escalation zone.

Around 2.4 million people of the northwestern Idlib province’s 3 million population need humanitarian aid, according to the U.N.

It says some 1,000 trucks have passed through the crossing every month over the past year, carrying in vital COVID-19 vaccines, hospital equipment and medicine for diabetes, tuberculosis and leishmaniasis.

The Security Council approved four border crossings when deliveries began in 2014, three years after the start of the Syrian conflict. But in January 2020, Russia used its veto threat in the council to limit aid deliveries to two border crossings, and in July 2020, its veto threat cut another. So today, aid can only be delivered through the Bab al-Hawa crossing from Turkey to Syria’s opposition-held northwest.

Over the past decade, around half a million people have been killed, and more than 12 million had to flee their homes.