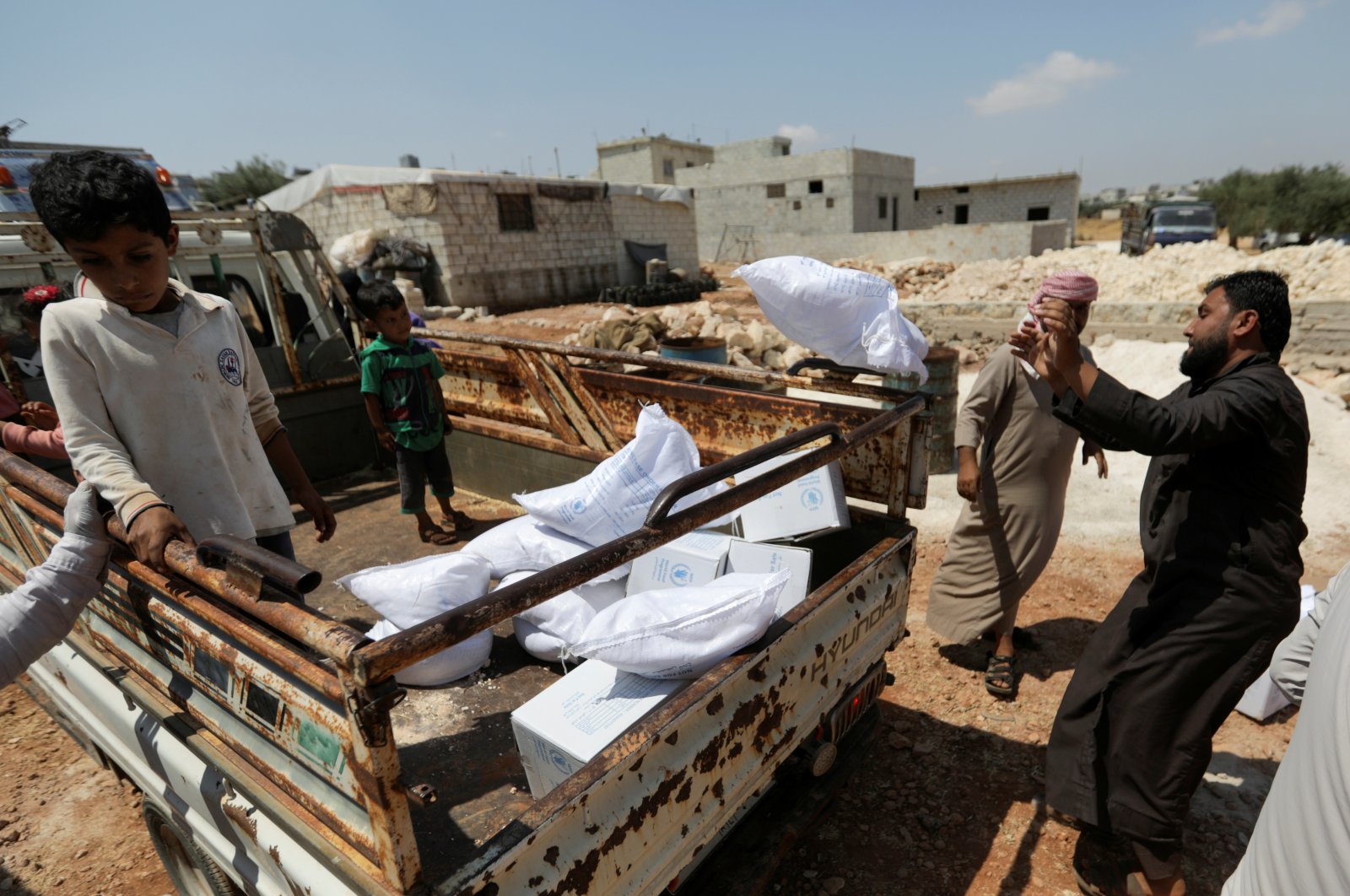 An internally displaced Syrian boy stands next to boxes of humanitarian aid at the back of a truck in the opposition-held Idlib, Syria, June 9, 2021. (Reuters Photo)
by REUTERS Jun 17, 2021 9:51 pm

War-torn Syria is on the brink of starvation as millions are now food insecure due to dire food shortages in the country and are in desperate need of international aid.

Hussein Mahmoud, a displaced farmer from Syria's Hama province who now lives in a camp in northern Idlib, divides the basic items in a food basket he receives monthly amongst his wife and 13 children.

By mid-month, the bread, rice, lentils and other essentials he gets as aid are nearly scarce but Mahmoud now fears this little support that has provided a lifeline for his family might end.

Millions of people living in northwest Syria, many of them displaced from elsewhere in the country's decadelong conflict, face Mahmoud's fate should the United Nations fail to approve an extension to cross-border humanitarian operations this July.

Access for cross-border aid from Turkey was reduced last year to just one crossing point after opposition from Russia and China – permanent Security Council members – to renewing other crossings. A new showdown is likely next month when the operation's mandate must be renewed.

Idlib province, Syria's last rebel stronghold, is home to around 3 million people, more than half of whom depend on food aid.

All of that filters through the Bab al-Hawa crossing where currently around 1,000 U.N. trucks enter a month through Turkey.

"Right now there is a plan for if no renewal happens and alongside our partner the World Food Programme (WFP) we are stockpiling for three months until the end of September," said Bassil al-Dirri, Idlib area manager for the Turkish Humanitarian Relief Association (IYD).

"But after that there will be nothing."

Russia, Bashar Assad regime's ally, has advocated ending all cross-border aid to Syria, arguing it undermines Syria’s sovereignty despite several reports that it hinders humanitarian aid to areas not under its control.

Should that happen, U.N. coordinated aid would have to reroute operations through Damascus.

"I ask all the humanitarians in the world to stand up against Russia to not make this happen," said Abdelsalam al-Youssef, director of Teh displaced camp in northern Idlib.

"There will be a humanitarian catastrophe if it does," he said as he attended a rally on the issue in the camp.

Some in Idlib warn of looming price rises should basic items grow scarce as demand for staples like bread and rice increases and supply remains limited.

"Traditional trade routes can't cope with the needs of the market ... so from an economic perspective, there will be an insane increase in prices," Dirri said.

"We are talking about basic items for each family, not luxuries... no family can go on living without them," he said.

Food prices in Syria have jumped by more than 200% in the last year alone, a March assessment by the WFP found.

The study found that a record 12.4 million Syrians, more than 60% of the population, suffer from food insecurity and hunger, double the number of 2018.

Some of the country's poorest and most desperate, having abandoned homes and land to flee war, live in Idlib's squalid camps like Mahmoud.

His family's fate and millions of others now hangs on the July 10 decision.

"We are asking God first and then the authorities to please make this continue for us," he said.