China advocates for extension of cross-border aid into Syria 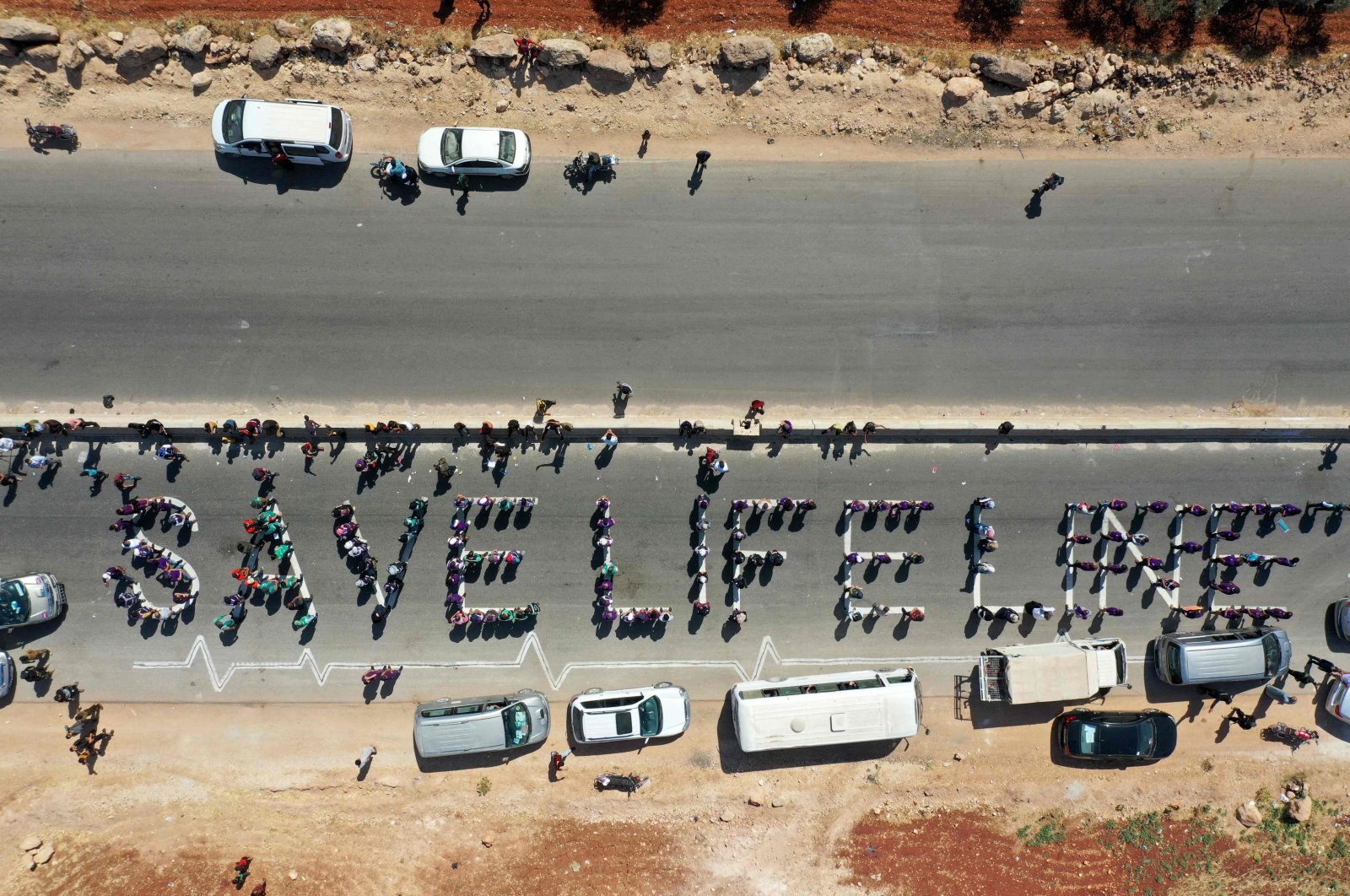 A human chain is formed by workers from the civil society, humanitarian aid and medical and rescue services in a vigil calling for maintaining a U.N. resolution authorizing the passage of humanitarian aid into Syria's opposition-held northwestern province of Idlib, July 2, 2021 (AFP Photo)
by DAILY SABAH WITH AGENCIES Jul 07, 2021 9:25 am

Russia, a permanent UN Security Council member equipped with the power to veto and a staunch ally of the Damascus regime, may block the renewal of a vital border crossing to Syria. While China, another security council member, supports extending the UN resolution

China, which last year vetoed a United Nations resolution on border crossings into Syria, stated on Tuesday that it supports extending humanitarian aid deliveries to the war-torn country and wants to tackle the impact of Western sanctions.

Chinese Ambassador Zhang Jun told reporters after closed briefings to the council and a discussion among members on a draft resolution to continue cross-border deliveries that he hopes “with more diplomatic efforts we can find a solution” – not just on cross-border aid.

His comments came as the 15 council nations have just days left before the mandate for cross-border aid expires.

“For China, definitely we want to see a solution concerning unilateral sanctions, concerning cross-lines, concerning the transparency of the cross-border. Not just talking about cross-border but about the general situation in Syria,” Zhang said.

In early July 2020, China and Russia vetoed a U.N. resolution that would have maintained two border crossing points from Turkey to deliver humanitarian aid to Syria’s mainly rebel-held northwest. Days later, under pressure from both countries, the council authorized the delivery of aid through just one of those crossings, Bab al-Hawa. The one-year mandate for using that crossing expires Saturday.

U.S. Ambassador Linda Thomas-Greenfield warned after Tuesday’s council meeting that Bab al-Hawa “is a lifeline to millions of people” in northwestern Syria’s Idlib region and if the crossing is closed, “I think the repercussions are obvious: people will starve to death.”

Echoing U.N. Secretary-General Antonio Guterres, many Western diplomats and humanitarian groups working in Syria, Thomas-Greenfield said there is no substitute for delivering U.N. aid across borders from other countries rather than moving aid across conflict lines within Syria.

“Cross-line aid alone cannot meet the needs of the Syrians – needs that have only risen in the past year with COVID,” she said.

“We have offered to support expanding cross-line aid, and we will continue to do so in good faith,” she said. “In fact, we have put forward a serious and credible proposal to expand humanitarian assistance across Syria – including cross-line and cross-border, including urgent COVID relief – to meet the urgent needs of the Syrian people.”

Responding to a question about the comments from China’s ambassador and whether the U.S. is prepared to offer any concessions on sanctions, Thomas-Greenfield replied: “This is not a discussion about sanctions. It’s a question of humanitarian needs.”

The ambassador, who visited Bab al-Hawa last month, said the U.S. sanctions target only Bashar Assad’s regime, while U.S. humanitarian assistance is for all Syrians, in both regime-controlled and opposition-held areas.

During the debate over the cross-border resolution a year ago, Russia raised the issue of U.S. and European Union sanctions on its close ally Syria and their negative impact on Syria’s humanitarian situation. The U.S. and EU vehemently objected to the allegations, insisting their sanctions provide humanitarian exemptions.

Two weeks ago, Russian Ambassador Vassily Nebenzia told the Security Council that aid moving across conflict lines within Syria “is the only legitimate option for a humanitarian operation to deliver assistance.” He accused Western nations of wasting the past year that could have been used “to find a seamless and constructive solution and an optimal balance of Idlib’s procurement through both Bab al-Hawa and domestic channels.”

Nebenzia also said U.S. and EU sanctions put “a heavy burden” on every Syrian, saying: “You blow the whistle regarding humanitarian access while pretending that the problem of Syria’s suffocation with sanctions does not exist.”

The council is now negotiating a draft resolution proposed by Ireland and Norway that would maintain the Bab al-Hawa crossing and reopen the Al-Yaroubiya border crossing from Iraq to Syria’s northeast.

French Ambassador Nicolas De Riviere, the current council president, warned that if humanitarian aid deliveries are allowed only across conflict lines – and not from neighboring countries – Western nations that provide 92% of humanitarian relief will stop the funding.

According to de Riviere, since the beginning of the year, 50 percent of requests to deliver humanitarian aid across front lines have been rejected by the Syrian regime.

Before the sit-down, Irish ambassador to the U.N. Geraldine Byrne Nason told reporters "we're hoping to see a successful renewal" of the cross-border aid mechanism, and warned of a potential "humanitarian catastrophe."

"We understand its politically sensitive, we're making a purely humanitarian case," she said.

Norway's U.N. envoy Mona Juul said it was "incredibly important" to get the "maximum" assistance into Syria.

"It's a lot at stake, it's really a life and death issue for so many," she added.

Robert S. Ford, a senior fellow at the Washington-based Middle East Institute, said in a briefing circulated Tuesday that “Moscow’s key consideration ahead of the vote is its relationship with Ankara.” He said the Turkish government, which supports the Syrian opposition, wants to avoid an enormous refugee rush from northwest Syria if the cross-border operation ends.

Russia has been cooperating with Turkey in the Astana process aimed at ending the fighting in Syria while it plays on “Turkish dissatisfaction with American policy to weaken NATO unity,” Ford said.

“The Russians are considering the cost of an aid veto that would encourage the Turks to move farther and faster toward a rapprochement with the United States,” he said.

Ford said Russia might accept an extension of cross-border aid deliveries “in return for reductions in Western sanctions,” clamping down on armed opposition groups in northwest Syria, and launching aid convoys from Damascus to Idlib.

Russia skipped Tuesday's talks on whether to extend approval for cross-border aid access into Syria, diplomats told Reuters, though it was said that they were still separately engaging with key members. Russia's U.N. mission did not immediately respond to a request for comment.

"The cross border aid operation has been the safest and most reliable way of getting aid to people," Mark Cutts, U.N. deputy regional humanitarian coordinator for the Syria crisis, told an event at the United Nations in New York, organized by Canada, the Dominican Republic, the Netherlands, Qatar and Turkey.

"In the last year we've been delivering an average of just over 1,000 trucks a month of aid into northwest Syria. It's absolutely vital now that we keep this aid operation going," Cutts said.

He further tweeted on Tuesday that "Syrian families who have been displaced time and again are dependent on humanitarian assistance. Don’t take their lifeline away."

Around 2.4 million people of the northwestern Idlib province’s 3 million population need humanitarian aid, according to the U.N.

Nongovernmental organizations (NGOs) have warned that rerouting such supplies through regime-held territory could lead to disaster. There is currently no agreement between the U.N. and Damascus to authorize U.N. aid deliveries to the northwest from inside Syria.