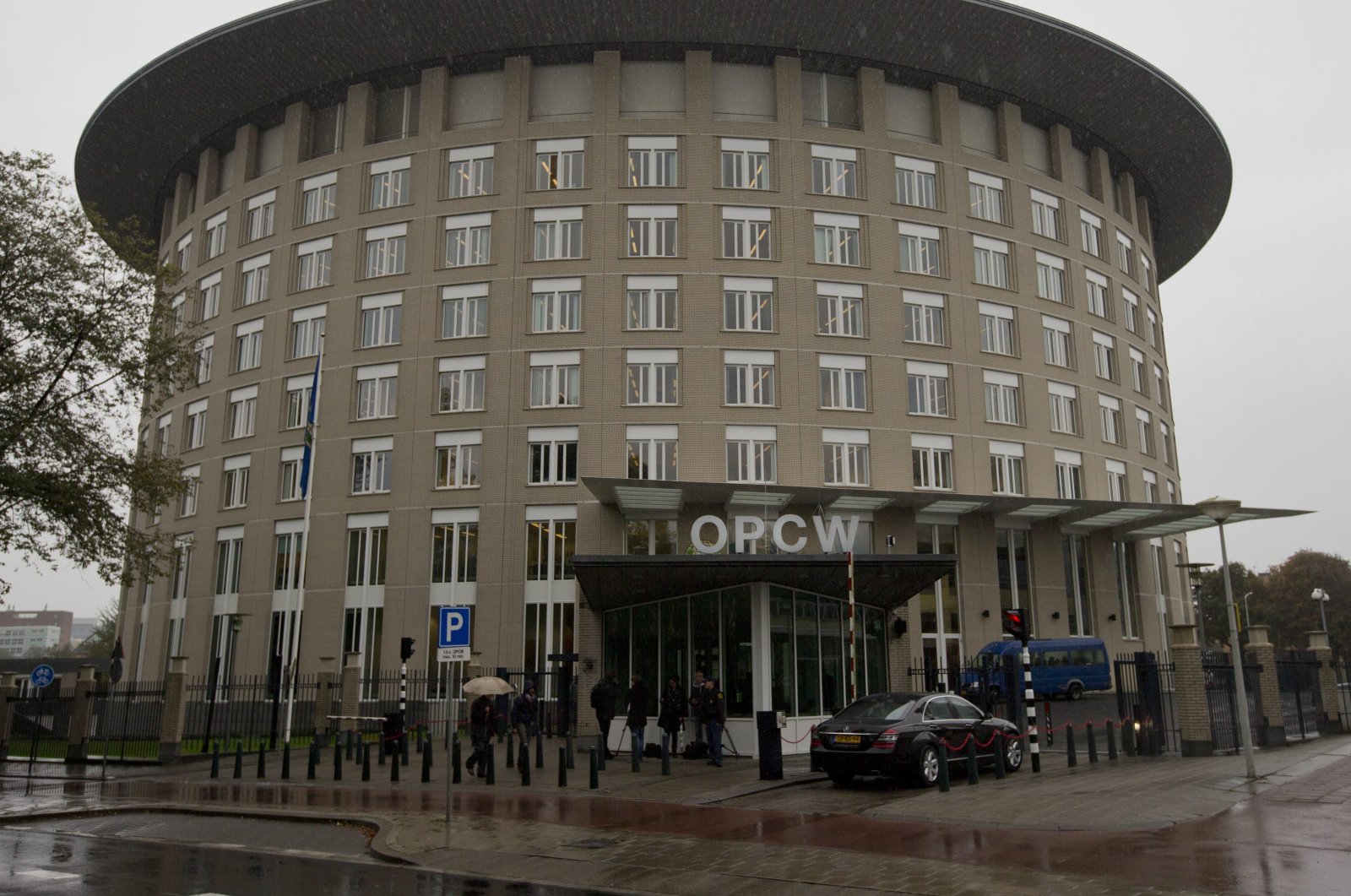 Exterior view of the headquarters of the world's chemical watchdog OPCW, in The Hague, Netherlands, Friday, Oct. 11, 2013. (AP Photo)
by DAILY SABAH WITH AGENCIES Apr 22, 2021 9:41 am
RECOMMENDED

The European Union and the United States late Wednesday hailed the Organization for the Prohibition of Chemical Weapons (OPCW)'s decision to suspend the rights and privileges of the Bashar Assad regime, over its use of chemical weapons in Syria.

"The European Union welcomes the Decision adopted today by the 25th Conference of the States Parties to the Chemical Weapons Convention (CWC) suspending the voting rights and privileges of the Syrian Arab Republic due to its failure to comply with the Convention," said the EU foreign policy chief Josep Borrell in a statement.

Calling the decision a strong message by the international community against impunity for the use of chemical weapons, he said that the convention is a key instrument of the global non-proliferation and disarmament architecture.

Borrell added that the bloc has strongly condemned the use of chemical weapons by the Assad regime forces in Latamneh in March 2017 and Saraqib in February 2018.

The OPCW determined that the regime used chemical weapons in Latamneh in March 2017 and in Saraqib in February 2018.

He urged the Assad regime to reveal the full extent of its chemical weapons program and return to full compliance with the convention.

He also stressed the EU and its members will continue to work at the national and international levels addressing chemical weapons attacks and other atrocity crimes committed by the regime.

The U.S. also lauded the vote among member states at the global chemical weapons watchdog that removed the Syrian regime's voting rights in response to the regime's repeated use of banned weapons.

"The use of chemical weapons by any state presents an unacceptable security threat to all," he added.

Member states of the global chemical watchdog Wednesday decided to suspend the rights and privileges of the regime, including the right to vote at the organization. The decision stands out as the heaviest sanction the OPCW has ever imposed on a member state.

A group of 46 nations called for the step Tuesday at the organization's annual meeting of member states. Behind the scenes diplomatic efforts to reach consensus on the proposal failed, leading to a vote Wednesday at which 87 nations voted in favor of suspending the Syrian regime's rights and 15 voted against. There were 34 abstentions.

In a tweet, the British delegation to the meeting called the decision a “vital step to maintain the credibility of (the) Chemical Weapons Convention.”

France's ambassador, Luis Vassy, introduced the proposed suspension Tuesday, saying that Damascus' use of prohibited chemical weapons was “irrefutable.” Vassy tweeted that Wednesday's vote was a “good day for multilateralism.”

The Syrian regime, which joined the organization in 2013 after being threatened with airstrikes in response to a chemical attack on the outskirts of the country’s capital, denounced the move as a “propaganda tool” and denied using chemical weapons.

The OPCW, the implementing body for the CWC based in The Hague, Netherlands, with its 193-member states, oversees the global endeavor to permanently eliminate chemical weapons.

The Assad regime's use of chemical weapons was previously confirmed by United Nations investigators as well as the OPCW.

The regime's use of chlorine as a chemical weapon is a violation of its obligations under the CWC, to which it is a party, as well as U.N. Security Council Resolution 2118.