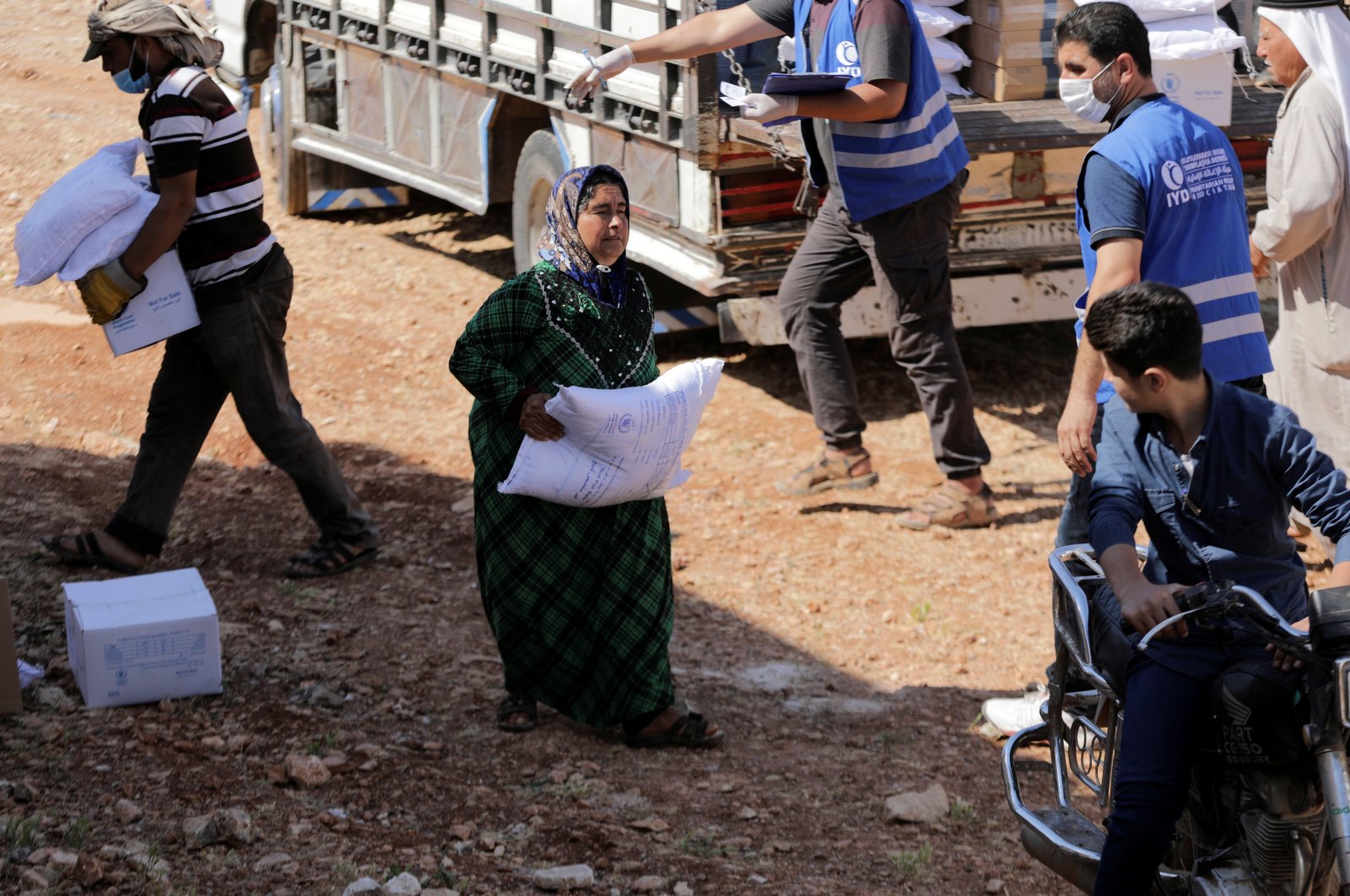 An internally displaced Syrian woman walks as she holds a bag of humanitarian aid in the opposition-held Idlib, Syria, June 9, 2021. (Reuters Photo)
by Anadolu Agency Jun 24, 2021 9:21 am
RECOMMENDED

Dozens of local and international nongovernmental organizations (NGOs) carrying out aid work in Syria oppose Russia’s intention to block aid to the country.

Eighty-one NGOs operating in Syria issued a joint press release opposing the closure of the Bab al-Hawa border crossing between Turkey and Syria, which is a key transit point for humanitarian aid coming into Syria and essentially the last lifeline for more than 4 million Syrians.

The U.N. had issued statements to member countries on the humanitarian situation in the region, said Khalid al-Fajir, head of the Human Aid Society, speaking at a camp where displaced civilians have taken refuge.

“Closing this door will lead to 4.5 million civilians, mostly children and women, being deprived of incoming aid,” Fajir said, noting that the goal of all NGOs taking part in the statement is to emphasize that Bab al-Hawa, which reaches millions of people, should not be closed.

“Some countries are putting in efforts against this decision,” he said, underlining that there is no alternative route if the Bab al-Hawa border crossing is closed to humanitarian aid.

“Any decision against humanitarian aid will lead to a disaster in the region,” he emphasized.

“We also want to point out that it is unacceptable that we have to emphasize the importance of the cross-border assistance mechanism every year. The U.N.’s authority for cross-border humanitarian access must be protected,” said the statement by the 81 aid associations.

Humanitarian aid has reached millions since 2014 through a mechanism authorized by U.N. Security Council resolutions that allow international aid to Syria.

In particular, people who have taken refuge in Idlib in northwestern Syria after being forcibly displaced rely on this aid.

By 2020, international humanitarian aid such as food, medicine, medical and hygiene supplies was sent through four border crossings, two of which were from Turkey.

The number of border crossings was first reduced to two upon Russia’s veto and objections. Later, Russia only authorized Bab al-Hawa to be kept open for another year.

More than 1,000 humanitarian trucks cross the Bab al-Hawa border into Syria every month, but the mechanism that keeps this border crossing open expires in July.

The U.N. Security Council needs to renew the mechanism so that the border crossing remains open and aid can continue.

The U.N., international aid agencies, Turkey, the U.S. and other Western countries want to increase the number of border crossings where aid will be sent.

But China, which has sided with Russia in the U.N. Security Council decisions on Syria, does not look favorably on keeping the Cilvegozu border crossing in Turkey’s southern Hatay province open.

As before, Russia defended the argument that humanitarian aid should be provided from regime-controlled areas inside Syria, shortly before the expiration of the cross-border aid mechanism.

The only border crossing where more than 1,000 international humanitarian aid convoys are sent to Syria each month will be closed to aid crossings if Russia objects.

In early June, U.S. Ambassador Linda Thomas-Greenfield went to the Bab al-Hawa crossing in Turkey and stressed that there is “no viable alternative” to deliver aid and meet the vast needs of vulnerable people in northern Syria. She also said there is an urgent need for additional crossings.

Idlib falls within a de-escalation zone forged under an agreement between Turkey and Russia. The area has been the subject of multiple cease-fire understandings that have frequently been violated by the Assad regime and its allies.