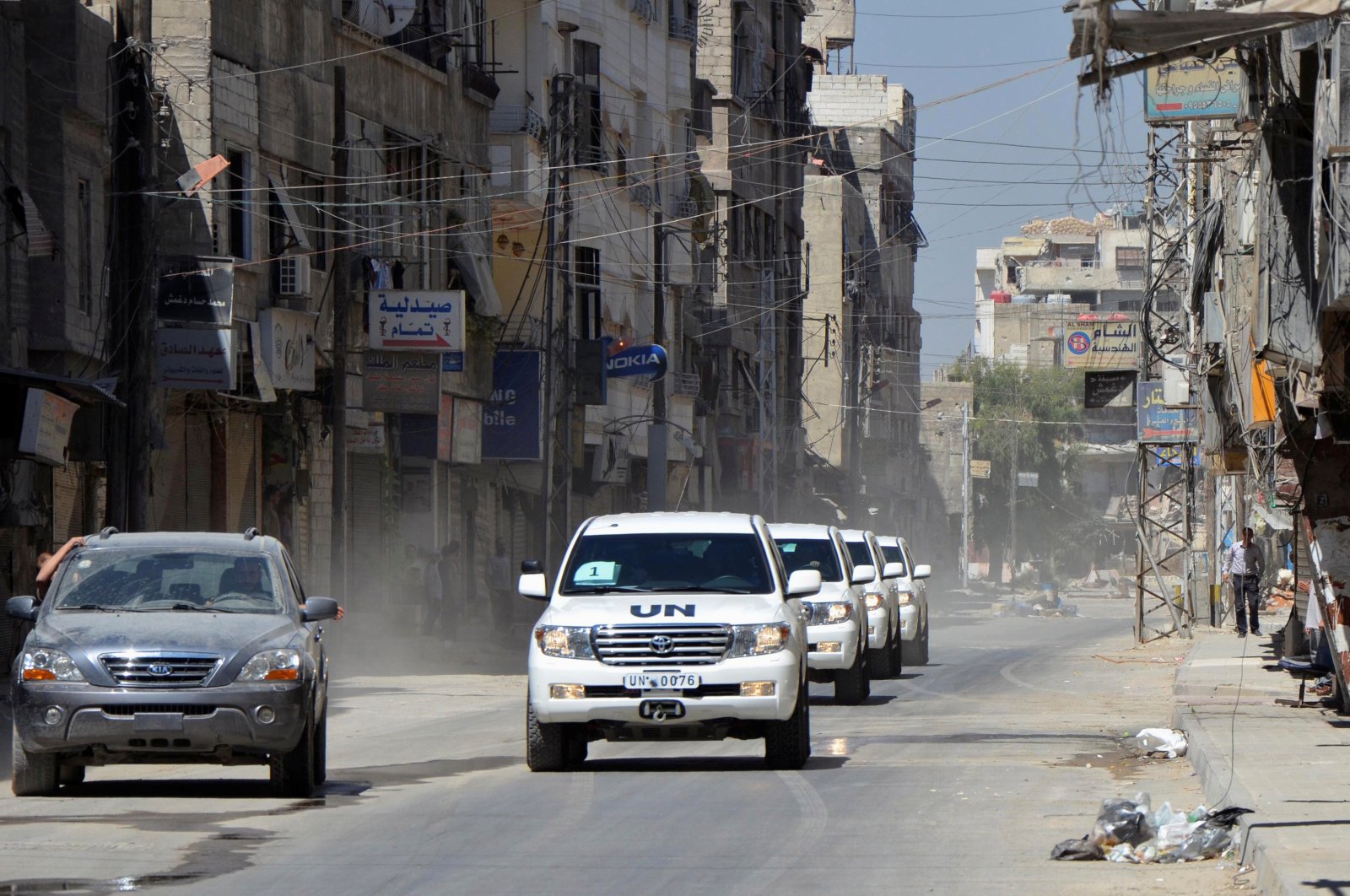 A convoy of United Nations vehicles carrying a team of U.N. chemical weapons experts and escorted by Free Syrian Army fighters drive through one of the sites of an alleged chemical weapons attack in eastern Ghouta in Damascus suburbs, Syria, Aug. 28, 2013. (Reuters Photo)
by ASSOCIATED PRESS Apr 07, 2021 8:16 am
RECOMMENDED

The United States and its allies argued with Russia on Tuesday over a vote that could take away Bashar Assad regime's voting rights in the international chemical weapons watchdog.

Moscow accused the West of trying to “demonize Damascus,” while Washington demanded a strong message to the Assad regime that using chemical weapons has consequences.

Among those is a chemical weapons production facility that the regime declared as never used for such production but where experts from the Organization for the Prohibition of Chemical Weapons found indications that nerve agent was produced or weaponized.

Nakamitsu also reported that site visits last September by OPCW experts found some “unexpected” chemicals in samples. She said Syria sent a note containing “further explanation" that is being analyzed.

In April 2020, OPCW investigators blamed three chemical attacks in 2017 on the Assad regime. The OPCW Executive Council responded by demanding that Assad provide details. When it didn’t, France submitted a draft measure on behalf of 46 countries in November to suspend Syria’s “rights and privileges” in the global watchdog.

The matter will be considered at the meeting of the OPCW’s 193 member states that begins April 20 at its headquarters in The Hague, Netherlands.

The regime's U.N. ambassador, Bassam Sabbagh, and Russia’s deputy U.N. ambassador, Dmitry Polyansky, reiterated that the regime strongly opposes the use of chemical weapons and does not possess them.

Polyansky accused the OPCW of violating the principle of consensus and creating “an illegitimate investigation and identification team” that committed many errors in accusing Assad of using chemical weapons.

Polyansky said it was likely that “before the grand spectacle finale” later this month, the OPCW team “will serve another surprise” and report “on yet another pseudo-investigation with accusations against the Syrian authorities in its conclusions.”

The Russian envoy urged a “no” vote on suspending the regime. “If you deprive Syria of its right to participate in decisions made within the organization, what is the point of Damascus to continue working with them at all?" he asked.

Syria joined the Chemical Weapons Convention in September 2013, pressed by Russia after a deadly chemical weapons attack that the West blamed on the regime. By August 2014, the Assad regime declared that the destruction of its chemical weapons was completed, but its initial declaration of chemical stockpiles and production sites to the OPCW has remained in dispute.

U.S. Ambassador Linda Thomas-Greenfield said that “the credibility of the Chemical Weapons Convention and this very council is at stake” in the upcoming vote on Syria.

She accused Assad of trying “to avoid accountability by obstructing independent investigations” and failing to cooperate with the OPCW. She said Russia is “spreading disinformation, attacking the integrity and professional work of the OPCW” and impeding efforts to hold the regime accountable.

Thomas-Greenfield noted that the OPCW team assessing Syria’s declaration recently “discovered nerve agent weapons activity occurred at yet another facility the regime had declared as never having produced or handled chemical weapons.”

She said member states should vote to suspend Syria and "send a strong message to the Assad regime that the use of chemical weapons is simply unacceptable and comes with grave consequences.”

France’s deputy U.N. ambassador, Nathalie Broadhurst, called for Syria’s suspension of voting rights “in order to reaffirm that the use of chemical weapons is unacceptable and that repeated violations of the convention cannot go unanswered.”