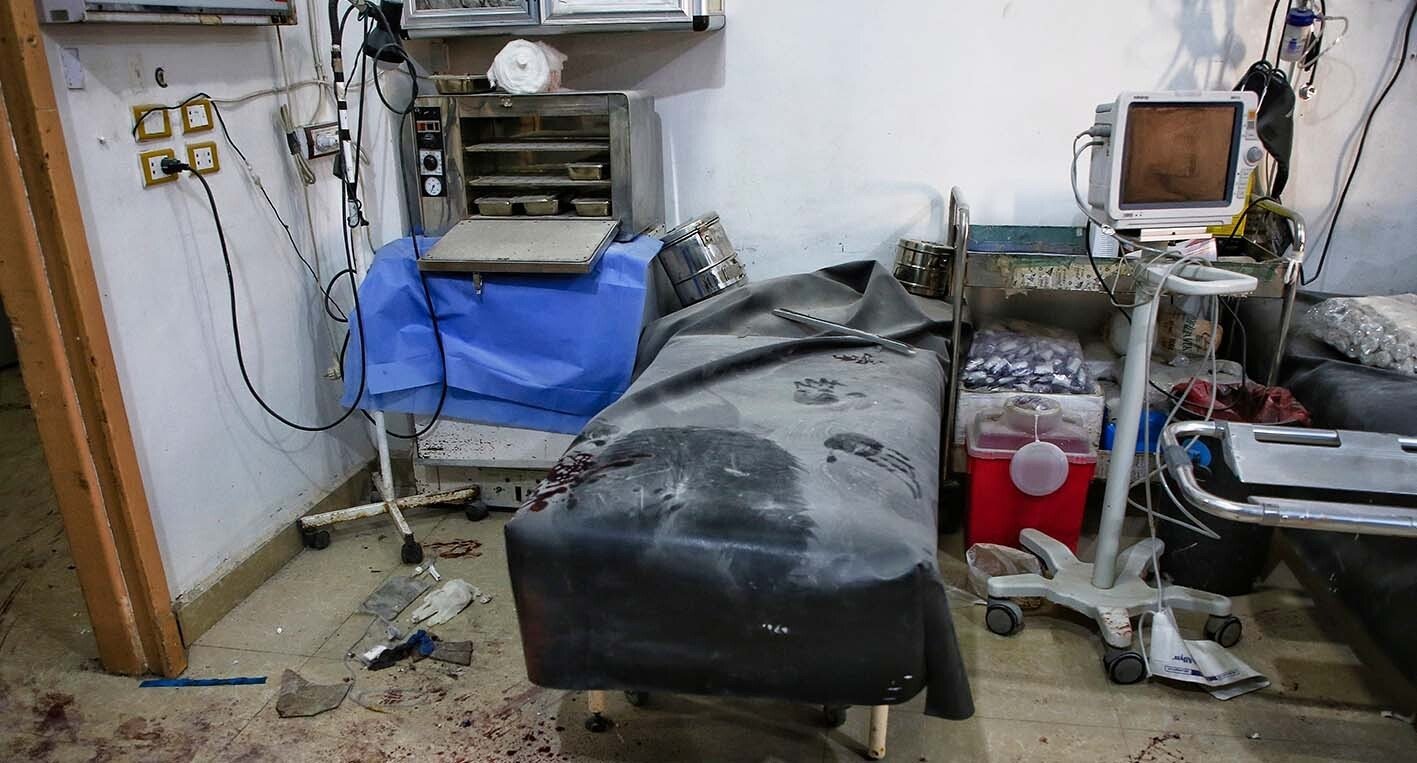 Al-Atareb Hospital in Aleppo Governorate, northern Syria, which is under the control of the Syrian opposition, was out of service due to the bombing of the Syrian regime, March 21, 2021. (Photo by Getty Images)
by DAILY SABAH WITH AGENCIES Jun 08, 2021 11:20 am
RECOMMENDED

The Bashar Assad regime’s recent election to the executive board of the World Health Organization (WHO) has drawn fierce criticism and disbelief, considering the regime’s systematic deadly attacks targeting health care facilities and workers throughout the decadelong civil war in Syria.

The Syrian NGO Alliance in a recent statement noted that according to a WHO report, at least 261 regime attacks on health care facilities in Syria were recorded, resulting in approximately 179 deaths and 363 injuries among health care workers and civilians.

Since 2011, the regime and its allies attacked more than 599 health facilities and killed more than 930 health workers, it added. It underlined that the regime also manipulated both the response to COVID-19 and the number of patients, noting that it corrupted the COVID-19 testing process and health staffs' protective gear, resulting in the death of over 130 Syrian doctors in 2020 in regime-controlled areas.

"Moreover, it continuously violated the International Humanitarian Law and UNSC resolution to protect and neutralize health and humanitarian aid workers despite the inclusion of sites through the Humanitarian Notification system."

According to the report, the regime has abused its role in crossline operations and prevented aid convoys from reaching besieged areas. Around 90% of aid convoys' requests to enter besieged areas were blocked, of which 75% of requests were ignored while 15% were rejected. The 10% that were approved had their medical supplies pulled by the regime.

"The systematic war the regime had against the healthcare sector, and its workers led 70% of Syrian physicians to flee, leaving one doctor for each 10 thousand Syrians and making the average of weekly work hours more than 80 hours in the health sector. Throughout the past ten years, the Syrian Government manipulated, politicized, and weaponized humanitarian aid, serving its allies’ interests," the alliance underlined.

"Despite all the mentioned above violations, WHO member states had elected the regime's minister of health on their executive board. This decision leaves us, the humanitarian NGOs, in a state of disbelief, knowing that our constant call to protect health workers and facilities is in jeopardy.

"We are afraid that such elections would affect the reputation and confidence in WHO leading role for health response, after all the efforts and amount of documented atrocities on health. We strongly condemn the Syrian Government appointment in the WHO Executive Board, and we wish the U.N. agencies to uphold humanitarian principles to the highest standards by abstaining from taking an explicit stand with any side of the conflict," the statement said.

The United States and Germany also last week expressed concern about the Syrian regime serving as an executive board member of the WHO, noting the "abuses" against citizens.

Amy Norris, a senior health adviser to the U.S. State Department, said there are "grave concerns that governments of two new board members, Belarus and Syria," do not share the WHO's values as demonstrated by their "respective human rights violations and abuses against" their own citizens.

"We also call on Syria to allow for the unimpeded access of life-saving humanitarian aid, including medical supplies regardless of where those in need are located," Norris said.

Germany’s health minister said he is “anything but happy” that the Syrian regime, which has waged a devastating, deadly decadelong war against dissenters, has been selected for a seat on the WHO executive board.

Health Minister Jens Spahn said that the choice of the Syrian regime reflected the need to work with some governments for the benefit of their people – especially on health matters.

“I’m anything but happy with this decision,” Spahn said when asked about the issue at a news conference in Berlin.

But he added that international cooperation among sovereign states was necessary to coordinate and set standards together, noting that similar situations arise in other international forums like the U.N. Human Rights Council.

“These are the shortcomings of realpolitik,” he said.

“Especially when it comes to health issues and the health care of the population, the question is always: Who are we actually punishing here if we don’t make cooperation possible?" Spahn said. "Are we punishing the regime or the population?”

Dozens of medical workers in opposition-held northwestern Syria's Idlib region last week also protested the decision to grant the seat to the Assad regime, accusing it of bombing hospitals and clinics across the war-ravaged country.

The Syrian regime was among 12 WHO member nations chosen to put forward new members for the 34-strong executive board, which is largely a technical group whose role is to carry out the decisions of and advise the assembly.

Nearly 75% of the total population in the Idlib region depends on humanitarian aid to meet their basic needs as 1.6 million people continue to live in camps or informal settlements, the U.N. Office for the Coordination of Humanitarian Affairs (OCHA) said recently.

The decision to give the Syrian regime a seat came a decade into the country’s devastating civil war that has left untold numbers of civilians – including many health care workers – dead and injured. Syria's war has left half a million people dead and driven millions out of the country since the conflict erupted in 2011.

Investigators working for the U.N.’s main human rights body and international advocacy groups have reported that the Assad regime and its allies – like Russia and Iran – have been responsible for the destruction of health care facilities as part of the years of fighting. Hundreds of medical facilities have been bombed, mostly in regime airstrikes; half the hospitals and health centers are functioning only partially or not at all, while 70% of the medical personnel have fled the country.

A WHO emergency appeal for the Syrian regime issued in March said at least 12.4 million people are in need of assistance in Syria, and the “essential health service infrastructure such as hospitals and health care centers are in a state of disrepair.” By the end of December, it said, only half of the country’s assessed public hospitals were reported to be fully functioning.

Earlier this year, an attack by the Assad regime and its backer Russia on a hospital in Idlib province was executed on purpose, Turkish security sources stated, adding that they had previously attempted to target the hospital but missed.

Turkey and Russia support rival parties in Syria’s 10-year conflict. The countries reached a cease-fire deal in March 2020 that stopped a Russian-backed regime offensive on Idlib.

The Syrian Network for Human Rights told Daily Sabah that the Assad regime and its allies have carried out at least 75 attacks in a year since Turkey launched Operation Spring Shield and brokered the cease-fire last March.