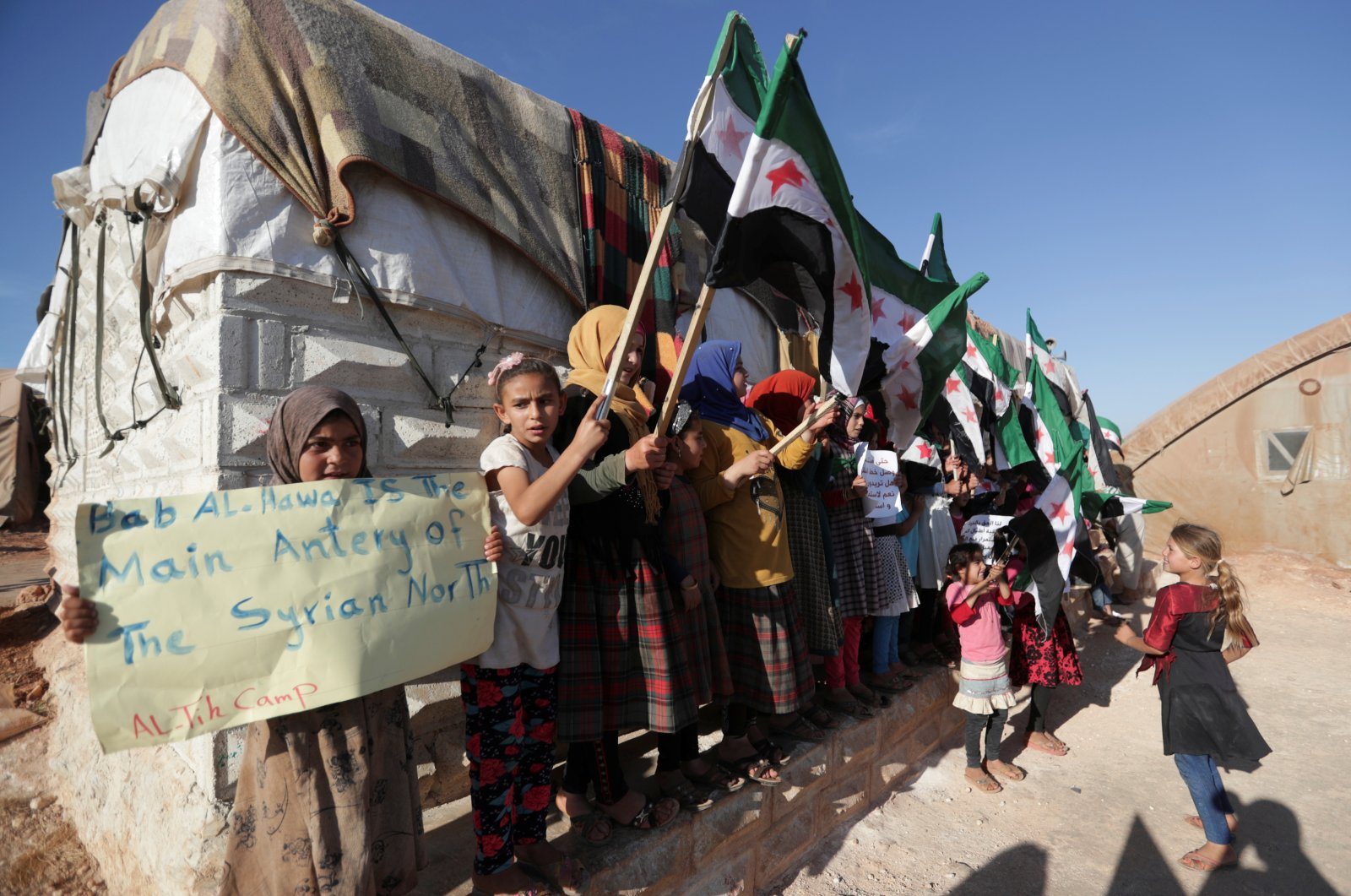 An internally displaced Syrian girl holds a sign during a protest against the closure of Bab al-Hawa crossing in the opposition-held Idlib, northwestern Syria, June 7, 2021. (REUTERS Photo)
by DAILY SABAH WITH AGENCIES Jun 20, 2021 11:24 am
RECOMMENDED

The United Nations Office for the Coordination of Humanitarian Affairs (OCHA) has called for a renewal of U.N. Security Council authorization for cross-border aid operations from Turkey to northwest Syria.

In a statement released Saturday, OCHA said that "millions of people are pressed up against the border in an active war zone in northwest Syria and remain in need of humanitarian aid to survive. The U.N. needs cross-border and cross-line access to reach those most in need."

OCHA emphasized that a failure to do so would immediately stop U.N. delivery of food, COVID-19 vaccines, critical medical supplies, shelter, protection, clean water, sanitation and other life-saving assistance to 3.4 million people, including 1 million children.

It added that "the U.N. continues engagement with all concerned parties to also allow cross-line convoys into the northwest. They are critical for the expansion of the overall response, but even if deployed regularly they could not replicate the size and scope of the cross-border operation."

Highlighting that there is simply no alternative, the statement said a large-scale U.N. cross-border response for an additional 12 months remains essential to avert a humanitarian catastrophe in northwest Syria.

Access for cross-border aid from Turkey was reduced last year to just one crossing point after opposition from Russia and China – permanent Security Council members – to renewing other crossings. There is expected to be another showdown over the issue at the U.N. Security Council next month as Washington and several other members of the 15-member Security Council are pushing to expand the cross-border operation, which U.N. aid chief Mark Lowcock has described as a "lifeline" for some 3 million Syrians in the country's north, more than half of whom depend on food aid.

All of that filters through the Bab al-Hawa crossing where currently around 1,000 U.N. trucks enter a month through Turkey. The U.N. Security Council first authorized a cross-border aid operation by U.N. and nongovernmental organizations into Syria in 2014 at four points. Last year, it reduced that access to one crossing point from Turkey due to opposition from Russia and China over renewing all four.

In the past decade, the council has been divided over how to handle Syria, with Syrian regime allies Russia and China pitted against Western members. Russia has vetoed 16 resolutions related to Syria and was backed by China for many of those votes.

Russia has advocated ending all cross-border aid to Syria, arguing it undermines Syria’s sovereignty despite several reports that it hinders humanitarian aid to areas not under its control. Should that happen, U.N. coordinated aid would have to reroute operations through Damascus.

Russian forces have helped Bashar Assad’s regime survive the more than 10-year conflict, and President Vladimir Putin hopes to be a broker for Assad in any international reconstruction effort for that country. Russia holds the key veto on July 10 when the Security Council decides whether to extend the authorization for aid crossing from Turkey.

Russia did not make any commitment to renew the cross-border aid operation into northwestern Syria during Putin's meeting with U.S. President Joe Biden on Wednesday.

Shutting down the international aid corridor and putting the Assad regime in charge of any humanitarian distribution would help position Assad as the winner in the war and Syria’s rightful ruler in the aftermath. It would also deepen the regional influence of Assad’s ally, Russia, in any rebuilding of Syria.

Opponents say the Assad regime has not hesitated to use civilian starvation and siege as a weapon in the war, and fear a destabilizing surge of refugees into neighboring Turkey if the crossing shuts down. Turkey, which already hosts close to 4 million Syrian refugees, joins the U.S. in opposing the closure of the crossing.