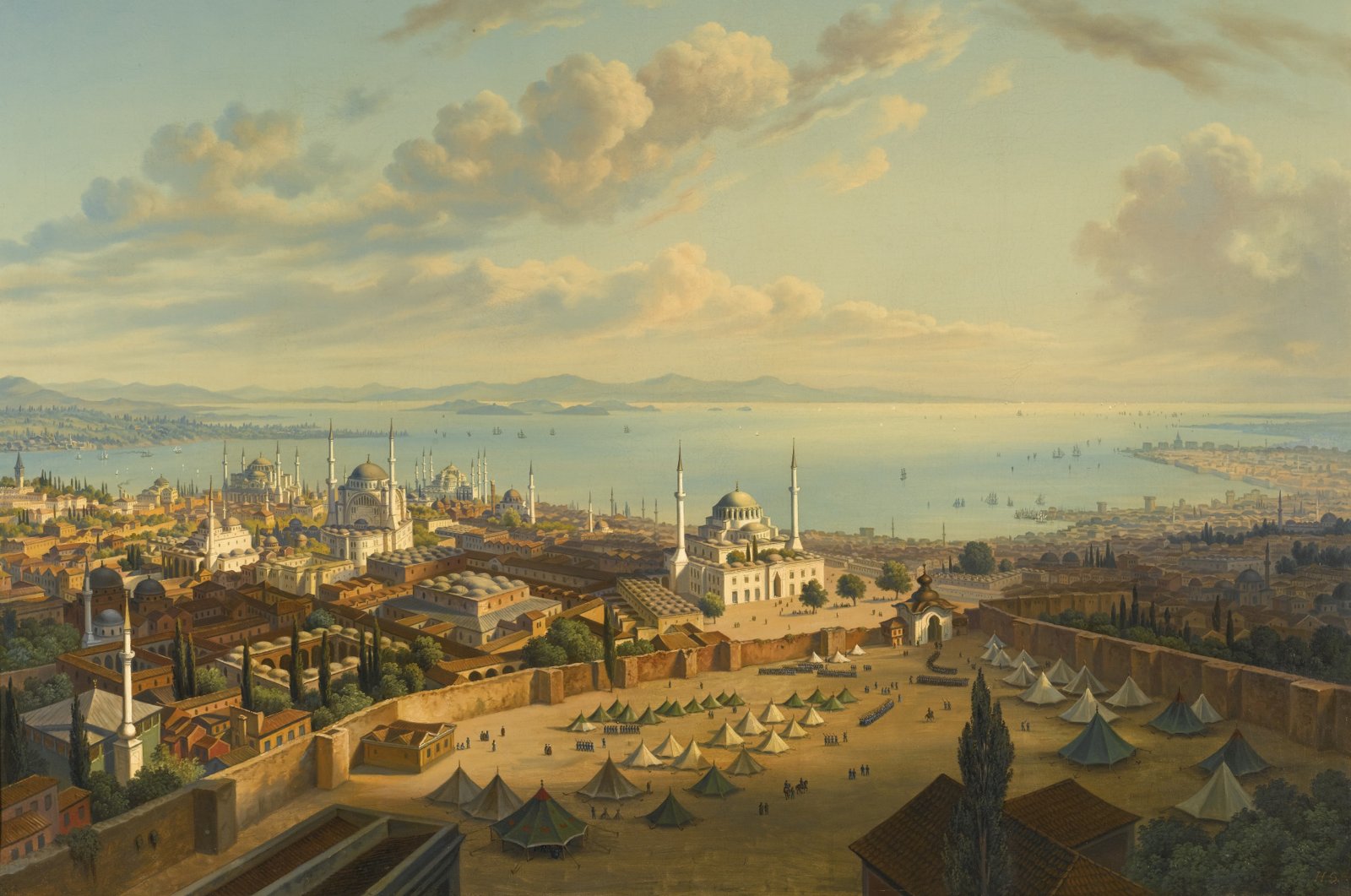 A painting by Hubert Sattler depicts the Beyazıt Square when a part of the Old Palace was allocated to military authorities. (Getty Images)
by ALİ TÜFEKÇİ Feb 25, 2021 2:41 pm

We have been away from the streets and had to cancel or postpone our travel plans for a while due to the coronavirus outbreak. Istanbul, one of the cities where historical tourism is the most vibrant, has also had its share of the pandemic-driven hitches. However, a revival can begin with vaccination, boosting hope for normalization.

Nevertheless, it is more plausible to visit outdoor historical squares rather than indoor areas in order to comply with measures in such a challenging period. In this respect, Istanbul’s Beyazıt Square, one of the most rooted squares in the city, is worth seeing. Let us take a look at the square, which is a cradle of culture in the strictest sense with its architectural structures and historical texture.

During the reign of Sultan Mehmed II, also known as Mehmed the Conqueror, (1451-1481) the city saw the construction of several architectural structures. These efforts were maintained and improved further by his son and successor Sultan Bayezid II (1481-1512), who took an eager interest in arts and architecture. After the long period of conquests during the reign of Sultan Mehmed II, his son attached even greater importance to reconstruction work.

For example, a mosque complex named after Sultan Bayezid was built to the south of the Old Palace between 1506 and 1512. After the construction of the complex, the area between the walls of this Old Palace and the buildings of the complex was called Beyazıt Square. There are several similar architectural structures belonging to Sultan Bayezid II and named after him in both Istanbul and other major cities, including Amasya and Edirne.

With the construction of the mosque complex, the square became one of the most active places of sociocultural life during the Ottoman classical period. Due to the Bayezid Mosque and surrounding bazaars, inns and madrassas, the square was the most hectic venue in the city. It was cleaned and swept twice a month on orders.

This was the place where wedding ceremonies of the daughters of sultans and the circumcision ceremonies of şehzades (a sultan’s sons) were held. For ceremonies, nahıls, which are decorated artificial trees, were made, and they were displayed and presented to the public in the square.

The square was also one of the number-one places for public entertainment. Musicians, fortune tellers, animal charmers, jugglers and acrobats boosted the popularity of the square with their performances. German pastor Stephan Gerlach, who visited Istanbul with the Austrian Embassy delegation, describes such shows in detail in his memoirs titled “Turkey Diary.”

From mosque to sahaf

The most remarkable structure in the square is surely the mosque complex. It was designed as a center of services along with the structures around it. The free shelter was provided to the homeless in a section called “tabhane,” while free food was distributed in a place called “aşhane-imaret” in this structure.

The portal of the mosque is of exceptional architectural beauty when compared to its equivalents. Its dome, which has a height of 31 meters (102 feet) inside, has a magnificent exterior with cubic blocks around it. Due to the destruction of the original structure of the Fatih Mosque, which was constructed between 1463 and 1470 and named after Sultan Mehmed II – known in Turkish as Fatih Sultan Mehmed – in an earthquake, Bayezid Mosque is the oldest sultan mosque preserved in Istanbul.

The madrassa section of the mosque complex was one of the most important educational centers in the city. It seems like an independent building because it was built a little far away from the mosque. The building was rather dilapidated in the 1930s but went through a comprehensive repair in the 1940s and was turned into a municipal city library in 1943. After serving for 40 years, the library was moved and the building has been used as the Museum of Turkish Calligraphy Arts since 1984.

Among the surrounding structures that made the mosque complex a cultural center is Bayezid State Library, which is located right next to it and was the first library built by the state. Mostly, all libraries in the Ottoman state were considered foundation works and run with private financial support.

As you head from the mosque toward the Grand Bazaar, you see the Sahaflar Çarşısı, or bazaar of sahafs, the second-hand booksellers. Many famous intellectuals of recent history used to gather in this bazaar. In fact, as its name suggests, this was a place where old books were sold. But it has turned into shops selling new books today.

Although the famous gate opposite the mosque is known as the Bayezid entrance gate of Istanbul University, it was called "Bab-ı Seraskeri" (the Gate of Serasker) in the Ottoman era. “Serasker” is the title granted to the chief commander of the Ottoman land forces. This area, where the Old Palace was located, was allocated to military authorities after the construction of new palaces. In times of both peace and war, all military affairs were carried out by these authorities here.

Therefore, the middle part of the gate features the inscription “Daire-i Umur-ı Askeriyye” ("Military Affairs Department") in large letters. Also, the first and third verses of Surah Al-Fath, the 48th chapter of the Quran, are inscribed on the right side and left side, respectively. The first verse reads, “Indeed, We have granted you a clear triumph,” while the third verse reads, “And so that Allah will help you tremendously.”

Above the gate was a tughra or an official signature belonging to Sultan Abdülaziz. In 1933, however, it was covered along with many other places at that time. During restoration work to restore the structure to its original state in 2014, the marble cladding on the tughra was removed, and it was brought to light again.