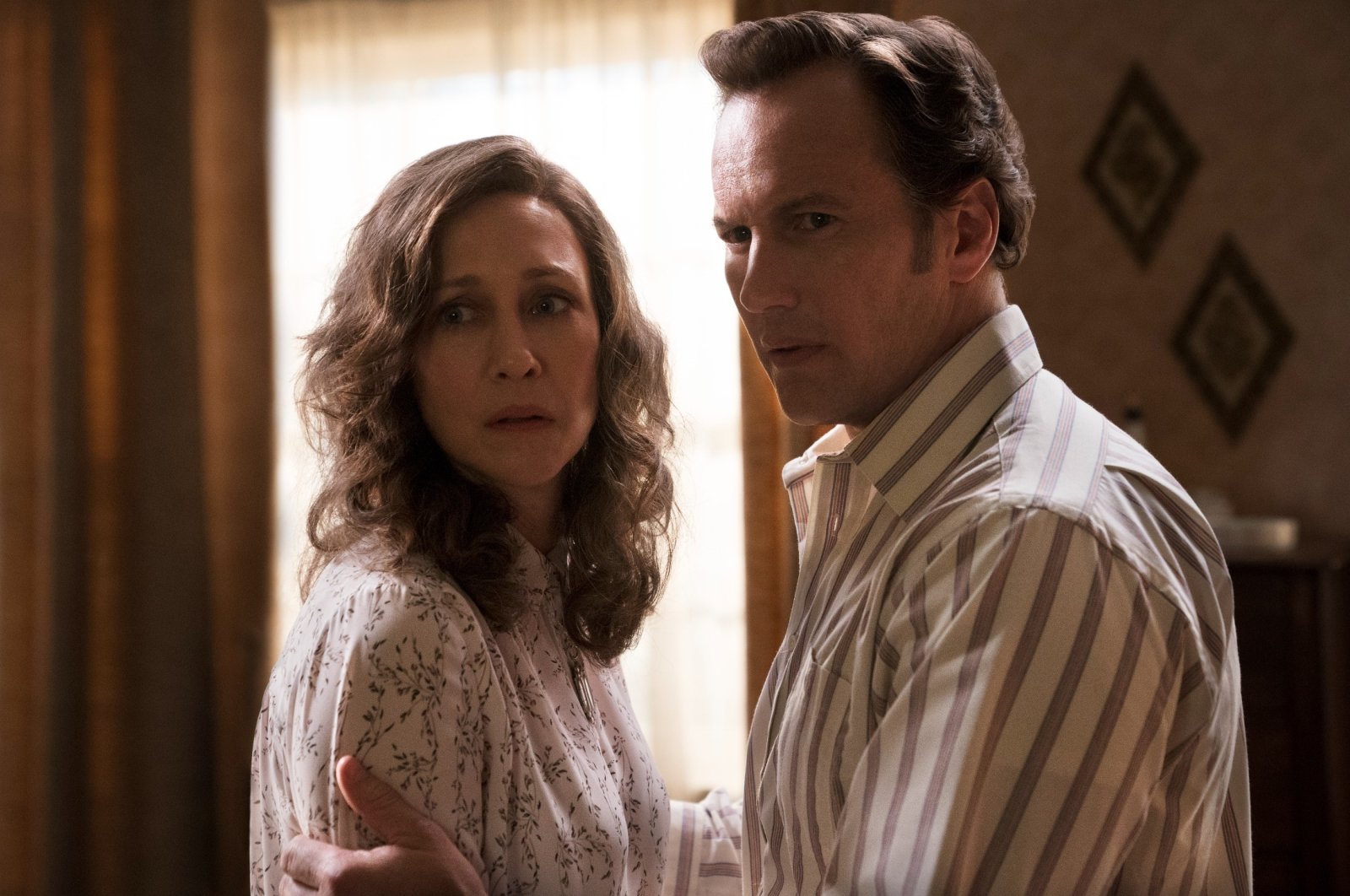 Vera Farmiga (L), and Patrick Wilson stand next to each other, in a scene from "The Conjuring: The Devil Made Me Do It." (Warner Bros. via AP)
by Associated Press Jun 07, 2021 2:19 pm
RECOMMENDED

Moderate wins and sizable second weekend drops: that was the motto of theaters before the pandemic, and it seems to have returned for the North American box office as "A Quiet Place Part II," after its triumphant first weekend, fell 59% and the new runner in the race conjured up a chance to take first place.

Warner Bros.' "The Conjuring: The Devil Made Me Do It," the third movie in the "Conjuring" franchise, earned an estimated $24 million according to studio estimates Sunday, making it the biggest R-rated opening of the pandemic. Paramount's "A Quiet Place" sequel meanwhile earned $19.5 million in ticket sales, bringing its domestic total to $88.6 million.

"You normally don't see two horror movies at the top of the chart. But it was a solid weekend for both movies," said Paul Dergarabedian, the senior media analyst for Comscore. "The movie theaters are coming back and Memorial Day was no flash in the pan ... It feels like summer again."

"The Conjuring 3" has Patrick Wilson and Vera Farmiga returning as paranormal investigators Ed and Lorraine Warren. Although there is a whole extended universe set around these films that have thus far grossed over $1.8 billion, this is the first "Conjuring" since 2016, and the first to be helmed by someone other than James Wan (Michael Graves directed). With an additional $26.8 million from international territories, the R-rated pic has grossed over $57.1 million globally.

"It's a terrific result," said Jeff Goldstein, the head of domestic distribution for Warner Bros. "We're continuing to see a ramp-up of return to life outside of our homes. It was never going to be a light switch."

In a pre-pandemic world, "The Conjuring 3" might have been considered a bit disappointing – the previous installments both opened around $40 million. But, as Goldstein noted, the third films in a horror franchise often take a hit. It has another caveat too: The film is also currently streaming free for subscribers on HBO Max. Warner Media did not say how many people watched it on streaming over the weekend or how many new customers signed up for the service.

It has become more normal than not for films to embrace a hybrid day-and-date release strategy, with the major studios using their biggest titles to drive potential subscribers to their streaming services. "A Quiet Place Part II" had the rare distinction of being exclusively in theaters, but even so it will be a shorter stint than usual before it hits Paramount+.

The Walt Disney Co.'s "Cruella," which opened in theaters last weekend, was also made available to rent on Disney+ for $29.99. The Emma Stone and Emma Thompson pic added $11.2 million from 3,922 theaters this weekend to take third place. Disney also did not say how much it earned from streaming rentals, but the company did note the drop from last weekend was only 48%. Globally, "Cruella" has earned $87.1 million thus far.

Most family films have gone straight to streaming over the past year and many big studios are opting to continue with the strategy for the near future. Disney and Pixar's "Luca" is skipping theaters and going straight to Disney+, where it will be free for subscribers on June 16. DreamWorks Animation's "Boss Baby" sequel is also debuting on Peacock Kids and in theaters on July 2.

The North American theatrical landscape is still a bit hobbled by the pandemic. Most Canadian theaters remain closed and around 27% of U.S. locations are still shuttered too. Many chains have also said vaccinated customers can now go mask-free in theaters.

Hollywood titles have also started performing better than they have been internationally during the pandemic over the past few weekends. In particular, Universal's latest in the "Fast & Furious" franchise, "F9," continued to pick up speed prior to its U.S. debut on June 25. This weekend "F9," which has already grossed $256 million from eight territories, became one of only 19 U.S. movies to have earned more than $200 million in China.

And although release strategies continue to differ company by company in unprecedented ways, Dergarabedian said the numbers are promising for the theatrical business even with the at-home viewing options.

"Over the past two weeks, the industry has been able to test out theatrical only ("A Quiet Place Part II"), a day and date with a (pay) subscription model ("Cruella") and a day and date that's part of a subscription ("The Conjuring 3"). The numbers have been solid," Dergarabedian said. "As long as we keep getting solid movies released, we're going to see the box office ramp up week after week."