‘Not So Neighbourly Affair’ invites us to have cevapi in Sarajevo 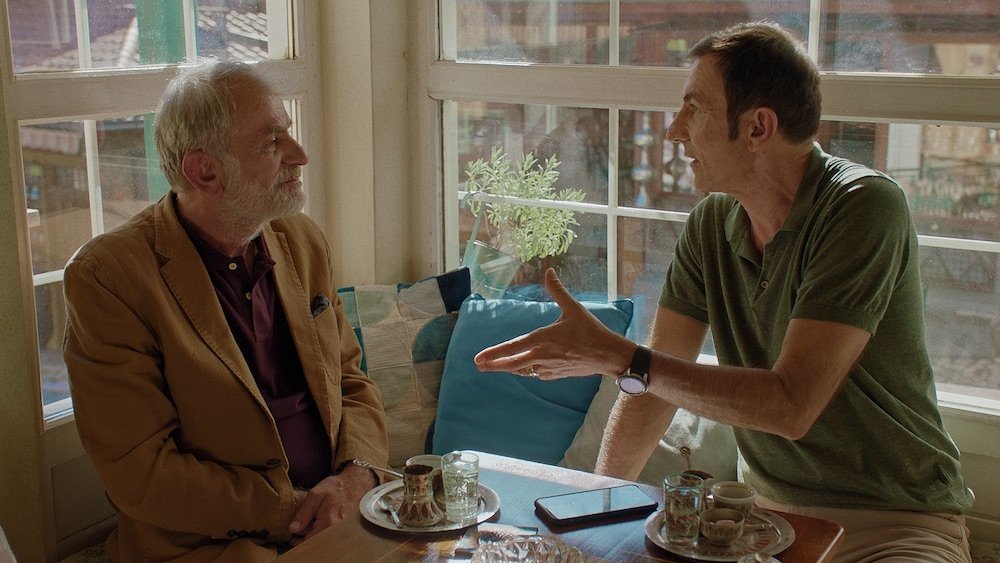 A still shot from “Not So Neighbourly Affair” shows Branko Duric (R) as Enis and Izudin Bajrovic as Izo.
by Nagihan Haliloğlu Nov 30, 2021 12:56 pm

“Not So Neighbourly Affair” is a film about rival meatball restaurants in the historic Bascarsija, the central old market neighborhood of Sarajevo. One naturally has to tread carefully when talking about national foods, and I am using what I hope is the “neutral” word meatball, where I want to say köfte, and where the Bosnians would say cevapcici or cevapi. Which food is called what and originates where is a favorite topic for fights on social media too, and there are even national movements to trademark a favorite, say a dessert, as belonging to one’s own nation.

At the risk of sounding reductionist, I will have to say “this is the Balkans,” and that people hold on to their traditions fervently. In this case, the narcissism of small differences is between two cevapcici restaurants across the road from each other. They are not exactly “warring” but are baffled when someone likes the other’s cevapcici more than their own. That is how confident they are of their own brand. What spices up the rivalry is that their children are planning a life together, and so there is also the prospect of becoming in-laws. So, if you want to read macro politics into this microcosm that director Danis Tanovic shows us, you are very welcome.

A film set in Sarajevo that has the title “neighbor” in it already conjures up a past that Sarajevo may want to move away from. Indeed, the original title of the film is actually the more irrelevant “Deset u Pola,” meaning “Ten in a Half” (yes, 10 cevapcici in half a loaf of bread) focusing on the immediate love for food rather than the troubled past of the city.

Filming during the pandemic

The film opens with Lana coming back from her gastronomy studies in Germany. The taxi stops bang in the middle of the Bascarsija. The sun is shining, everything is spick and span, and we feel we are getting off the taxi with her to explore this beautiful neighborhood. And for the first time in a film I see this year, there is a character wearing a face mask! This is a rare film in which the characters are inhabiting the times we have been experiencing since the beginning of the pandemic, and so it pulls us in more into the space – almost like a VR tour of the old town of Sarajevo.

In the press conference at the Ajyal Film Festival in Doha, his mask pulled just under his chin to speak, one of the leads, Kerim Cutuna who plays the son of one of the restaurant owners, explains that the shooting of the film, which took just under a month, happened during the relaxed environment of the summer and the director Tanovic told the actors they could wear (or not wear) the kind of face mask they wanted to.

Watching the film, you get a good approximation of your own neighborhood or friends’ varying approaches to what is appropriate in what circumstances. Working with masks on and the pandemic, and making it a point of conversation rather than creating a fake present where these things don’t exist seems like a natural choice, but very few film/series makers seem to have adopted this approach.

The conflict that propels the story – if we are pushed to look for one in this “feelgood film” as described by its makers – in the script is not so much between the two restaurants but between the father and the daughter, between staying in Sarajevo and leaving it for more promising prospects. This difficult relationship with one’s city is a theme that seemed to run in some other films at the Ajyal Festival too. One could argue that the pandemic has made us reassess our relationship with our immediate environment, and make decisions about what we want that immediate environment to look like.

The esnaf of Sarajevo

“Ten in a Half” is filmed in such a way to make the audience ask “But how can Lana want to leave this paradise?” It is a world inhabited by well-meaning people and the rivalry between the two restaurants is immaculately gentlemanly. It is one where one of the restaurant owners will gladly send customers to the other one so that the rival can also keep business going so that there are people you can have coffee with at the coffee house.

There is a scene where one of the rivals tries to show some spleen by going to a cafe and not a coffee house, and by having herbal tea. It is, on the face of it, a very trivial act, but those who know the esnaf (shopkeeper) culture will recognize this as a terrible breach. In its own way, the film exudes Ahi culture, the brotherhood of shopkeepers that makes sure that everyone has had some business by the end of each day.

This self-sufficiency of the Bascarsija is threatened when one of the restaurant owners decides to borrow money from a loan shark, and the Bascarsija fights this in its own way. This is where the civil war past of Sarajevo is touched upon briefly, not as a central theme, but as a point of reference for some of the characters’ developments.

The rivalry that is stoked, unintentionally, by a Croatian food vlogger, spreads to the whole of the Bascarsija and then it is decided that there needs to be a competition to decide once and for all who makes the best cevapcici. The meeting to decide on the rules is interrupted by cevapcici makers from Ilidza, a district right outside of the town center, and there is a discussion as to whether they can be allowed to participate. It could be just me reading too much between the lines to find politics in a film that is supposed to make you feel warm inside, but this drawing of the line of who belongs where does invite more historical reading.

All things considered “Not So Neighbourly Affair” (“Ten in a Half”) is a beautiful film precisely of its time, of the pandemic, of a younger generation who want to build a life elsewhere, and of cities trying to regenerate after catastrophes.